I have fun flying a Caddx vista on a 4" frame running betaflight. However on a 4" frame with caddx vista, you can’t record HD video (caddx vista does not have a SD card nor a recorder and it does not have a full HD resolution). What’s frustrating with such a quad is that you have a fully functional GPS you don’t fully exploit (useless in acro mode and can only serve with the retarded betaflight reutrn to home). Further betafllight does not have advanced features like arducopter has and certainly can’t fly autonomously with waypoints and mission commands.
If I wanted hull HD video on such a craft, I would have to piggy back a naked gopro or similar light weight HD camera solution but you ruin your quad’s weight with all of the consequences.

So I decided to build a 5" size quad running Arducopter, with ALL of the mandatory and optional hardware to be able to take advantage of all of Arducopter’s features: GPS, external compass, Full HD camera 1080p 60 fps at least, onboard SD card recording, OSD (for arducopter’s telemetry AND ESC telemetry), long range HD FPV video link to use with DJI goggles, 433 Mhz Radio telemetry, Barometer, self powered with battery “Lost beeper and buzzer” that I can activate with a switch on my radio, black box logging (for logs obviously), long range (ELRS) receiver. Did I miss something ? Probably.

This is still not a sub-250 but it was not the objective to reduce weight as much as possible (for that I would have used a Caddx Vista instead of a DJI air unit and I would have cut on all of the 3D printed parts). The objective was to have a 5", as light as possible, without any compromise on anything : good solidity, really useable in the field (not a lab quad ). 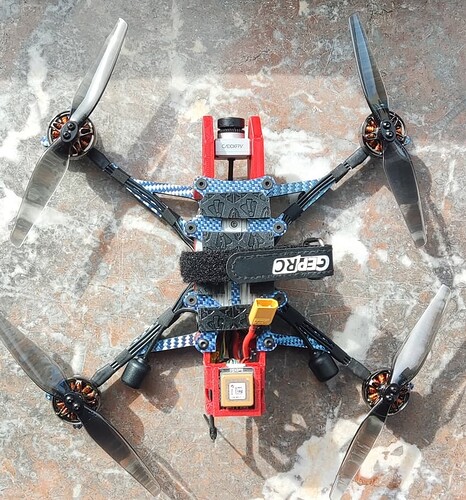 I had to use 35 mm standoffs to be able to stack vertically ESC, FC and DJI air unit. It has two 5.8Ghz antenna (for diversity). I placed the antennas along the arms so that they can’t vibrate in flight (traditional builds place the antenna on the back TPU mount but that creates vibrations in the frame during flight and it is a weak point)

Some umagrip pads are great to stick your battery on top (it is both very sticky and soft to dampen any schock on the battery): 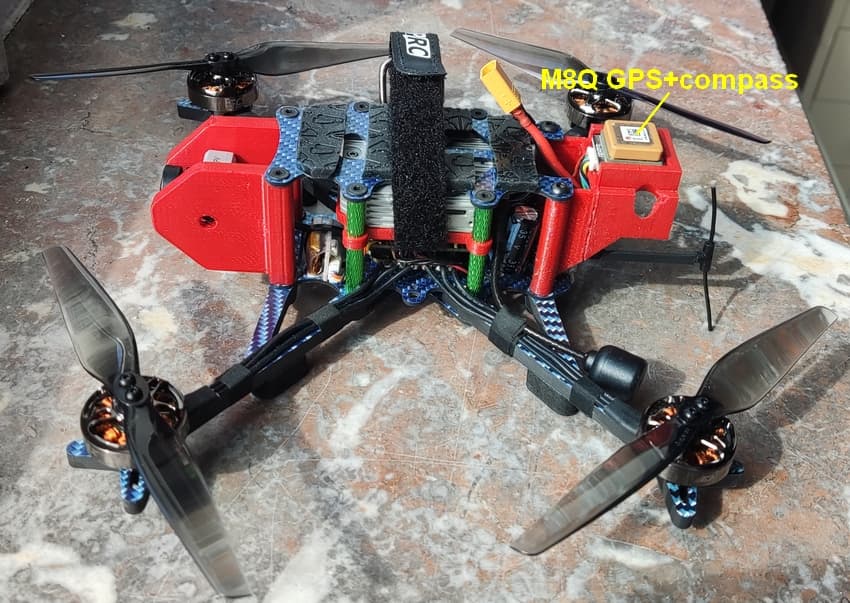 A capacitor on the battery input is not really required below 6S, but I put it anyway. 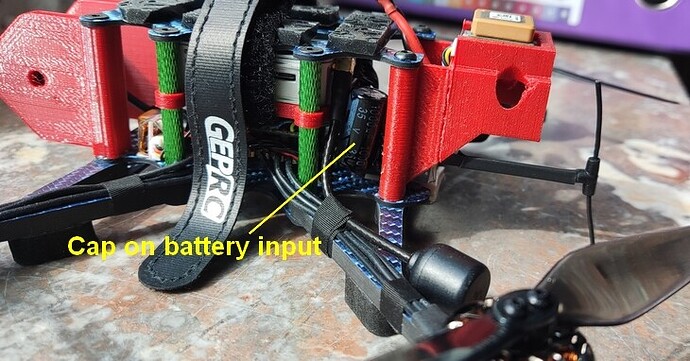 This frame with my vertical stacking mod allows free access to both the Kakute H7 mini USB-C port and the DJI air unit USB port:

This is the biggest weakness I found with arducopter on this build : having a functional buzzer on a non pixhawk open hardware. It simply does not work as it should. Best I could get are monotone buzzing sounds that do not even sound like they should (as compared with a normal buzzer on a pixhawk type FC). But I wanted a self-battery-powered buzzer that can beep automatically in case of radio signal loss and/or battery loss. One that can also be activated with a switch on the Tx to find the quad in case I would loose it in grass or in a tree:

I installed a micro telemetry unit on the bottom of the craft so that its (weak) PCB antenna is in direct line of sight with the ground station on then ground: 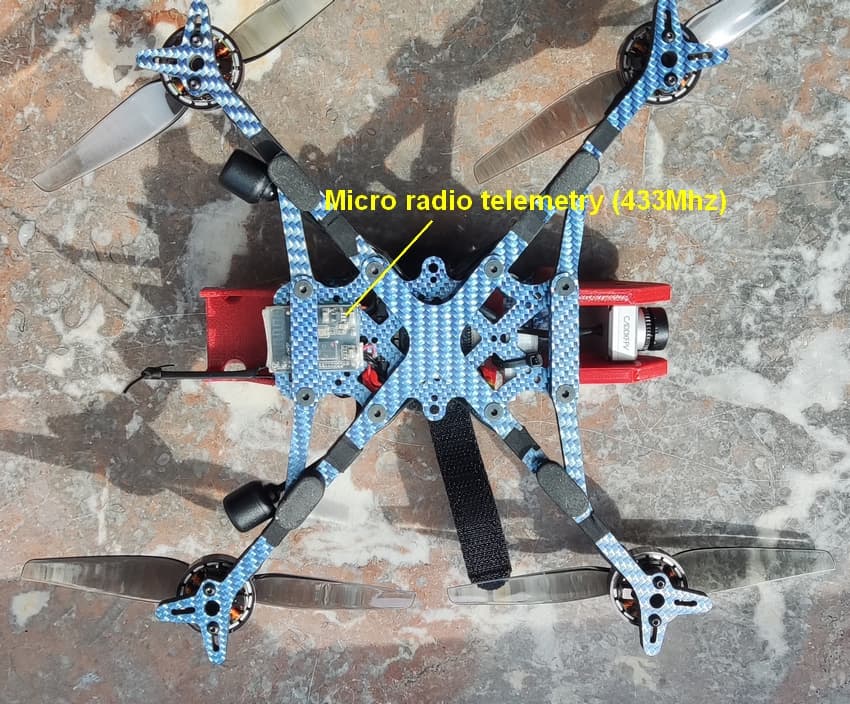 The frame is modded from the commercially available AOS UL5 frame by Chris Rosser (weight of 55 grams).

Propellers are HQprop 5.1 inch bi-blades which are more efficient that three-bladed props (if you’re not racing)

Motors are Eco max II 2004 2400Kv which give the best efficiency as compared with any other 2004 motor (cf Chris Rosser video on his youtube channel). 16g/motor.

all-up-dry-weight (everything, including battery strap and anti slip pads, except battery) of about 254 grams.

I think that most people use angled GPS/compass mounts because the quad is angled in forward flight, no?

you’re right. In long range flight and autonomous missions, the quad does flight gently, unlike a racing quad. So mostly horizontal position in flight

After a few first testflights, using as a parameter’s template the param file from Andypiper (who published an ardupilot 5" build based on the 5" Rekon quad frame), I confirm it flies ok, including auto missions with waypoints. But I am not perfectly satisfied with the flying sensations : not as “controlled”; feels"weak" on, the throttle (although hover is way below 50%), motor noise indicates tuning is not ok with audible motors/props vibrations, also some vibration seen on the video. However there is no jello which is good without camera dampening/isolation.
And the props are in the field of vision.

Other improvement points :
-to relocate somehow the 2.4Ghz ELRS antenna so that it is placed horizontally instead of vertically (to match with the horizontal polarization of my TX)
-to reposition the DJI air unit antennas so that they are not so close and obstructed by the fiber carbon frame
-to redesign the GPS/Compass TPU 3D printed mount so that it can’t move/twist so easily (which affects the compass. I experienced strange yaw instabilities at times during flight)
-to redesign the GPS/Compass mount TPU 3D printed mountso that the GPS/compass would not touch the ground in case the frames hits the ground upside down or in “turtle” mode

These are pictures of the resulting, hopefully imroved, version: 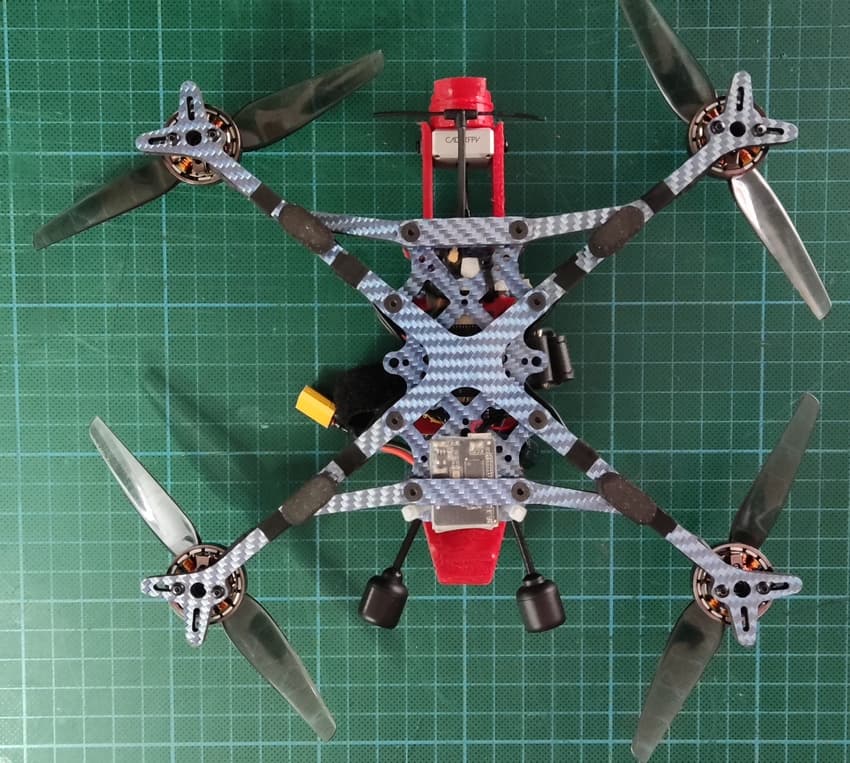 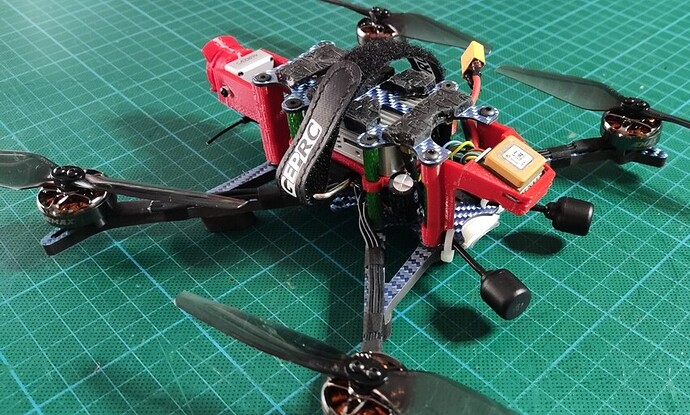 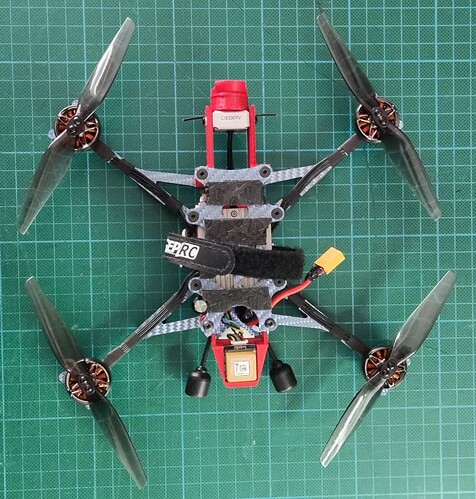 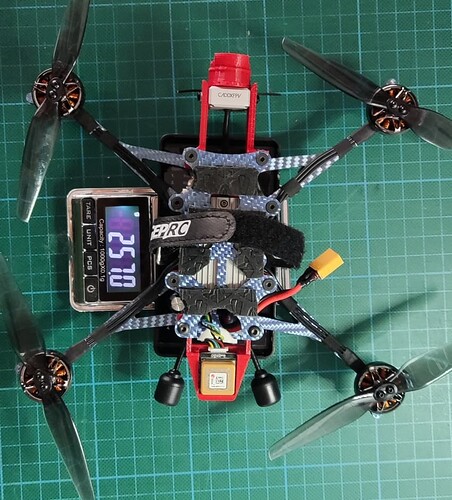 If I did not want full HD (1080p) video, it could be much lighter replacing the tank DJI air unit by a much lighter caddx vista but then I would loose full HD (1080p) 60 fps video capability with onboard SD card storage. That would then have to be replaced by an additional camera: naked gopro or a 360 peanut camera, adding weight…

That leads inevitably to some build/design compromise and my conclusion is that it is impossible to build my intended 5" quad sub 250 (incl battery) with current hardware or did someone find a winning design ?

I haven’t even tried. For me an arducopter sub 250 has to fly at least 10 minutes or more. To do this it is difficult without 2s Li Ion and consequently the quad is a 3 “max 4”

I’ve seen in the betaflight world that the 3.5 inch class is great and sub 250 even with a naked Gopro on top. But of course it is limited to betaflight’s firmware (thus only manual acro flying mostly)

Could you use a Caddx Turtle to give HD recording but analog FPV?

It would be a compromise if HD FPV is not an important criterion (it is for me to avoid branches and other fine detailed obstacles). I looked quickly and it seems the turtle V2 is discontinued and/or out of stock everywhere. It is an “old” product" , probably not in very much demand anymore nowadays.