It directs setting ATC_THR_MIX_MAN TO 0.5 after test flights. 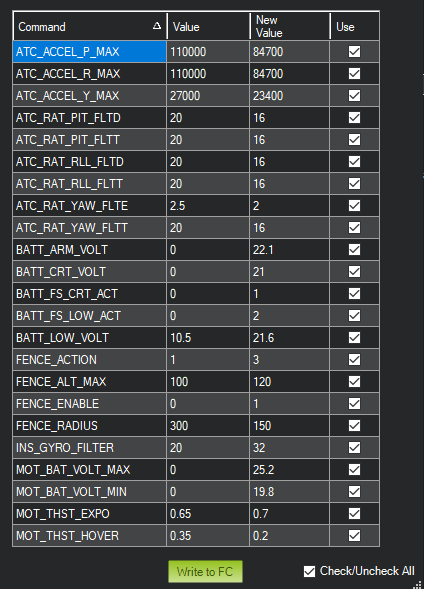 So my question is what value should ATC_THR_MIX_MAN be set to when doing initial test flights?

As I understand the docs, the default value of 0.1 will prioritize throttle over attitude.

Is this the preferred state for initial test flights?

I appreciate your help!

Since the Initial Parameter Setup routine does not set ATC_THR_MIX_MAN back to the default value of 0.1, do you suppose that it should be changed so that it does? Or perhaps just a notice in a dialog box that the user is responsible for this?

I hate to bother the DEV’s with trivial stuff - but maybe this isn’t trivial.

When using the Initial Params screen, ATC_THR_MIX_MAN would appear in that list if it was to be changed. That indicates you’ve already got it at 0.1 in that screenshot.
You’ll notice if you connect a copter that’s already done the initial params and do it again only the differences appear, which may be none.

The idea of using a low ATC_THR_MIX_MAN value during initial flights is you can lower throttle if experiencing a fly-away of some instability requiring immediate landing → and the craft will respond to throttle input instead of trying to remain stable.
For example, at default value 0.5, you’re having instability or a fly-away and you lower the throttle, but the craft keeps trying to maintain stability and thus keeps increasing altitude, or at least wont descend fast enough before oscillating too much and crashing.

If ATC_THR_MIX_MAN is higher the craft tries to remain more stable rather than completely follow all throttle input - this is good once you’ve completed testing and satisfied with performance and your level of control. 0.5 is the usual value and some smaller quads often use even higher values.

Parameters that are already at the calculated new settings don’t show up on the list. With these exceptions: 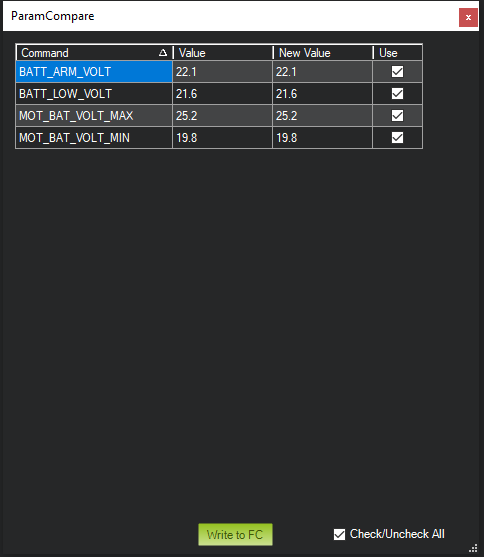 When I ran Initial Parameter Setup repeatedly, these four parameters always show up.

Your explanation of what ATC_THR_MIX_MAN does and why 0.1 is the recommended initial setting is exactly how I understood it. Thanks for the confirmation!