I was wondering if anyone can tell me whether or not DJI’s ‘Guidance’ system can be configured to work with arducopter solutions (PixHawk / PixHack) or other? 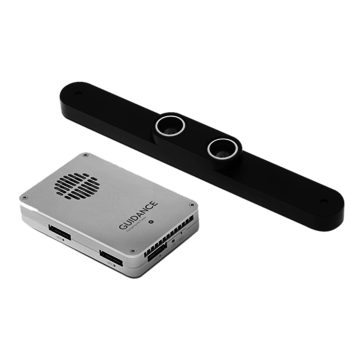 Shop for Guidance on the official DJI Online Store. Find low prices and buy online for delivery or in-store pickup.

The unit does allow for custom DIY configurations, but it may not be possible to incorporate it with the existing arducopter flight controllers.

Agree with Gary… A very big WHY ??

So guessing by the incredibly unconstructive comments, I am going to assume that no one actually looked at what DJI ‘Guidance’ is. It is a developer kit which is not completely unlike optical flow. It just a sensor array of visual and ultrasonic sensors which can be used for collision avoidance purposes. It works in five directions (forward, back, left, right, and down). As it simply provides sensory information, it is the flight controller itself which would need to make use of the data.

Again, this is a developer kit. As the manual indicates that the sensors can be used with other ‘intelligent systems’, I just wanted to see if anyone knew whether or not the sensor information could be used with any of the open source solutions.

It really isn’t like changing the engine of a car. It’s just adding some sensors. Like I said, the closest comparison would be optical flow, but I don’t see anyone’s arms up in the air about optical flow. I can only assume panties got in a bunch at the mention of ‘DJI’.

no. not without a companion computer. guidance requires a driver and hal. drivers are typically provided by os (windows, linux, etc) and hal is provided by the DJI sdk which is only for windows or linux. you would need a raspberry pi or similar to even talk to guidance.

in theory you could connect guidance to rasp pi, and raspi pi to apm, but you would have to implement the dji sdk on the rasp pi. there aren’t any examples of anyone using guidance on anything other than a matrice, even on the dji dev forum, so won’t find any information on this.

Okay, makes sense!
Thank you for offering your insight on the feasibility of incorporating that guidance system into an apm environment. I’ve seen others getting similar results by using multiple optical flow solutions (or similar) to get a similar effect. I wasn’t sure which route would be the cleanest and give the best result. This definitely gives me more to think about. Thanks!

I was looking at the same thing, and I wondered if you made any progress on your search on this? I was considering the same thing (finding an implemented and existing sensor/camera array that would be able to interact with APM) but did not find anything else (yet) than this DJI Guidance system…

No. Unfortunately I did not find a way of implementing this system. I ended
up abandoning the project and so I didn’t get into any trials. It looks
like the new Pixhawk v2 (cube) roadmap puts a bit more emphasis on obstacle
avoidance, so hopefully systems will come out in another year or so which
can be implemented easily into the APM environment.