Hello, today we were manual tunning the t-tail skywalker UAV, last week we did the autotune but the airplane was not flying quite well, so we decide to adjust some parameters before the auto flight. Everything was going well, we were following the manual tune guide in the arduplane webpage, the plane was in FBWA mode and it was flying well. When we were getting ready for land, the airplane suddenly made a hard roll and it got into a spin. The bank angle is limited to 45° but we have notice that everytime this airplane exceeds this bank angle it might get into a spin. This in not the first time this is happening to us, we have this same result with other two airplanes in different flight modes. I am attaching the log file

I will appreciate any help.

The weather was fine, it was a windy day (around 20km/h constant wind). We think that this is why the airplane got into that hard roll, because the airplane was flying fine. Still, we believe thar airplane should be able to react to any type of external perturbation to save itself.

Thank you very much.

I am looking at your log. Here’s what I see so far:

I see 3 flights, I’m looking at the last one. Here’s a plot of the altitude, with little pink triangles at MODE*20 to indicate a mode-switch. Takeoff was in MANUAL (mode=0, not shown), the mode was briefly set to STABILIZE (mode=2 during the initial climb) and then most of the flight was in FBWA (mode=5) as you mentioned. 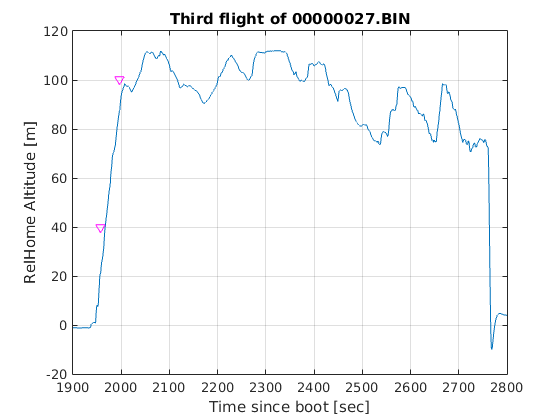 Let’s zoom in on the “crash event” to see what happened. Here’s a plot with a lot of data… 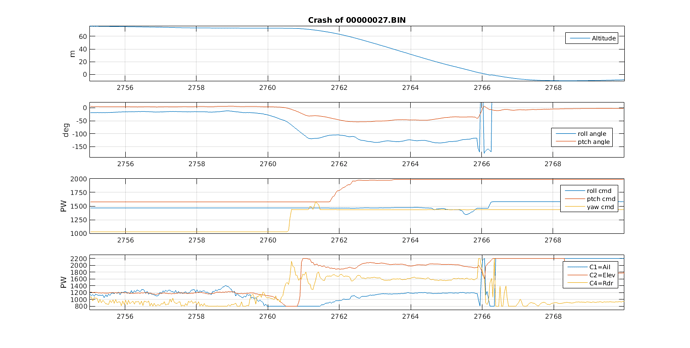 The top plot is the same altitude, just zoomed-in on the crash event. The next plot is the roll and pitch angle, in degrees. The third plot is the roll, pitch, and yaw COMMANDS as given by the pilot on the TX. The fourth plot is the output values to the control surfaces. (C1=Ailerons, C2=Elevator, C4=Rudder, as indicated)

This plot confirms that the likely cause of major altitude loss was a very-large-negative roll angle, and that the pilot was not commanding this using the Aileron input of the TX. The pilot was, however, commanding a maximum YAW during this time, and did not stop commanding yaw until the plane had rolled to about -60[deg]. I am not sure if this is significant or not.

Take a look at the first 1/3rd of the RC Output (bottom plot). Attempting to fly the commanded full-yaw flight, the aircraft was using about half of it’s full Aileron and Elevator deflection, and had already nearly saturated it’s Rudder! The plane may be nearing the limits of it’s ability to recover from a wind gust, or other unexpected event, when flown in this manner.

This is just my opinion… others who can take a look at these logs, do you see anything I missed? Or anything I got wrong?

Hello, Thank you very much for your answer. I will double check the trims and the surface deflections. I was looking at the log too and I notice that, but you explanation help a lot. Also, do you or anybody else have had any kind of problem like this? I believe this airplane cannot had a bank angle higher than 60deg in both directions, or am I getting a wrong impression?

Also, do you or anybody else have had any kind of problem like this?

Could you be more specific? What exactly do you think “the problem” is?

My conclusion was that the pilot demanded a yaw command which was too risky for the plane (all the control surfaces were far-from-centered), and it crashed because of that. (It may have gotten a wind gust, stalled, entered a spin, or something else.)

The situation might have been prevented by being more gentle with the aircraft, or with a less aggressive tuning/trim setup.

The situation might also have been prevented by the pilot very quickly switching to manual mode, and recovering the plane that way. This may take great piloting skill. Or by quickly switching to another of the self-stabilizing modes, perhaps the autopilot would be skillful enough to recover.

I believe this airplane cannot had a bank angle higher than 60deg in both directions, or am I getting a wrong impression?

I don’t understand your question. Perhaps someone else can help?

Are you asking if this plane is “aerodynamically incapable” of recovering from a 60deg bank angle? I have no experience with this plane, but that would surprise me.

Or are you perhaps asking if ArduPilot should have prevented the plane from banking more than 60deg?

Thank you hunt0r. I clearly understand you conclusions and they are very helpful. I have made some changes on the airplane surface. We will be flying next week.

I was trying to ask if anybody had experience a 60deg + bank angle and the airplane had gotten into a spin. I believe the airplane should be aerodynamically capable of recovering from this bank angles.

Still, we are going to be more gentle when flying the aircraft and test it in auto mode to see how it performs.

Thank you very much for your help.

I just thought to check the Airspeed! My new guess: you might have stalled. Do you know any approximate stall speed of your aircraft?

Here’s a plot of the 3rd flight with altitude, roll/pitch, and finally airspeed. Notice that during most of the flight, the average airspeed was around 10 [m/s]. However, near the end, the aircraft was flying slower. Several times before the crash, the airspeed gets as low as 7.5[m/s]. 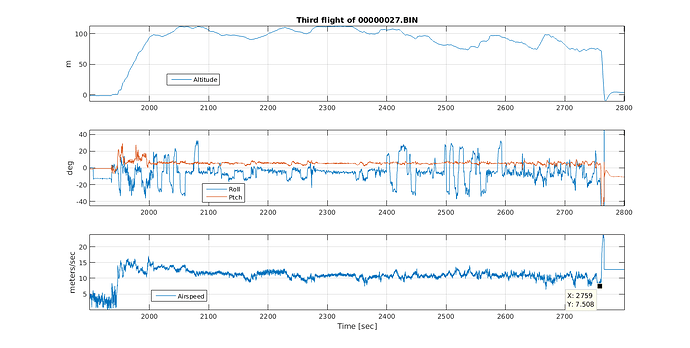 I am not surprised at all that a stall during a turn would make the plane bank-and-dive very aggressively. That would be very hard for any human (or autopilot) to recover from!

Yes, that is true. I appreciate your help. The plane cruise speed should be 12m/s. We believe that air speeds lower than 10m/s are not good for this airplane. Also, we have seen that every time it stalls it tends to roll and gets into a spin.

I will increase the airspeed and the minimum airspeed to prevent this.