Hello.
Big trouble.
We are in the progress of flying our GoDiscover with Navio+ over UDP, but there’s a big obstacle right now.
We use Qgroundcontrol as ground station, because it runs on Linux and it’s fairly good software.
However, we cannot use joystick for anything, apparently because there’s no support for MAVlink MANUAL_CONTROL in ArduPlane. Is there some workaround? We can’t use Mission Planner anymore, because we want to connect via our homebreed relay server, which by now works very well. But we cant initiate outwards udp connections from Mission Planner. And also, Gstreamer on Windows sucks big time (crashing on almost periodically).

apparently because there’s no support for MAVlink MANUAL_CONTROL in ArduPlane

yes, I’d be happy to add this if you can test it for me.
Can you build the firmware yourself if I give you a git branch, or do you need pre-built for NavIO+ ?

Hi, I’m also interested with joystick control under qgroundcontrol (archlinux) and ardupilot Fw on plane. I could test it also on pixhawk but I think you have already one Tridge.
Do you have a PR about it somewhere ?

Do you have a PR about it somewhere ?

I just created it:

Works with disco chuck autopilot and 3dr pixhawk + my old dualshock 2 and Qgroundcontrol on Archlinux.
Thanks Tridge, I don’t have sbus receiver for disco so it’s usefull.

Could not assign button to flight mode but I think it’s related to Qgroundcontrol. Have this message : buttons reserved for firmware use => 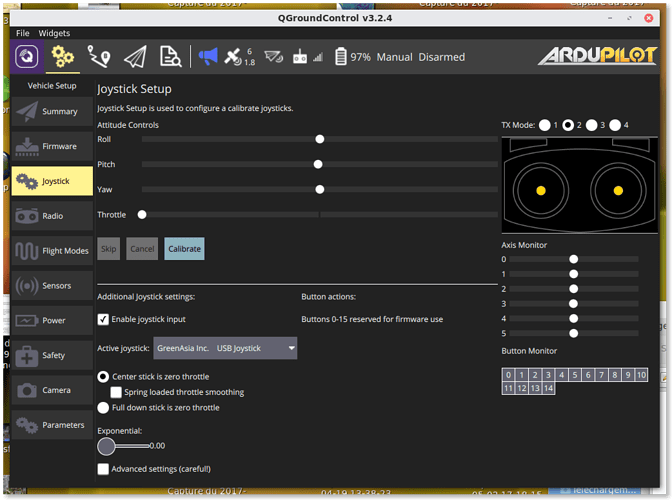 we may be able to fix that. I’ll look into it. I don’t actually know how the button mapping works in MANUAL_CONTROL

Ok !
Is it a firmware or software issue ?