After about 70 unsuccessful attempts in the past three months to realize auto landings with Lidar and reverse thrust using LAND_FLARE_ALT rather than LAND_FLARE_SEC , I decided to make things simpler and verify how good Arduplane deals with a simple mission with an altitude change between two waypoints.

The plane has both Lidar and reverse thrust , TECS parameters are the default ones.

Here how it looks in Mission planner 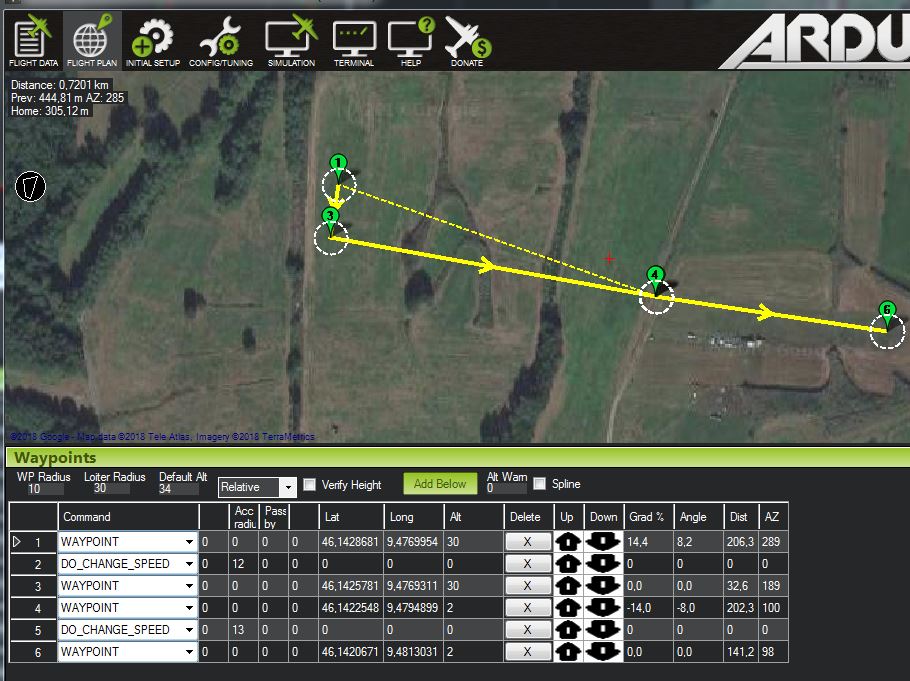 Here is a video of what happened with 200 meters distance between the two waypoints 3 and 4 , Bin file 56.
The plane missed completely by at least 60 meters waypoint 4 and had a totally wrong descent slope . Waypoint 4 correspond to the red stuff on ground.
I had to switch to FBWA to avoid the ground.

A previous attempt with 130 meters distance between the two waypoints 3 and 4. Bin file 55.
Things were better , the waypoint was reached but at wrong altitude but more bad the plane continues his descent slope till 30 cm from ground while it was supposed to fly straight at the same altitude to waypoint 6.

The good : The plane use reverse thrust to control the plane speed pretty well but I ignore , since the engine is at the back of the plane , if the air pushed towards his V-Tail reduce pith authority and get the flight controller “confused” .

Does 12m/s with Talon is ok ?
Interesting reading, everything seems ok. 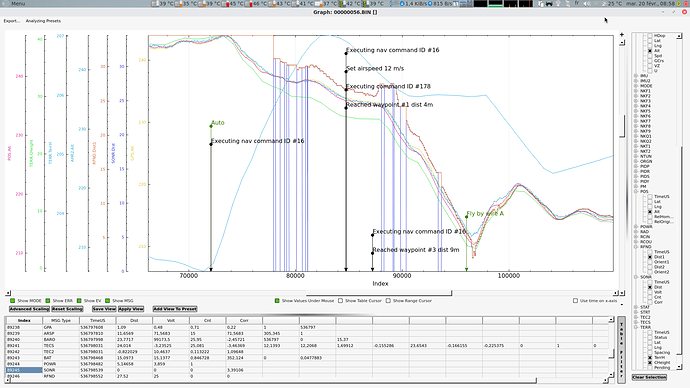 I would like to buy a lidar also but when I saw what you wrote, it’s seems discouraged !

Did you try without EKF ? May be related to this : Firmware v3.8 - Plane dont use rangefinder during landing process

Thanks for your reply kikislater ,
The stall speed is around 7,5 - 8 m/s so 12 m/s is the cruise speed for that plane and 10 m/s the minimum speed in FBWA mode.

I did not try without EKF , but i’m sure that in landing mode the Lidar is used by Arduplane 3.8.4 , in the log it is written when rangefinder is engaged.
But in non landing mode, let’s say Auto mode I’m not sure that the Lidar is used because there is a parameter that seems an heritage from Arducopter code that make no sense on a plane:
https://discuss.ardupilot.org/t/ek2-rng-use-spd-make-no-sense-to-me/25875
Anyway I have tried the descent slope mission above in both ways with Lidar and with Lidar disabled and physically disconnected from the autopilot but without any different results.
The mission above just last some minutes so the baro drift is not a problem , the problem is the behavior of Arduplane that seems to calculate a simple descent slope.

I did not mention it but I underlined that I used the default TECS parameters because when I tried to tune it during several flights , the results were really bad, nothing seems to work as expected and the plane behavior was erratic and not repeatable.

I even try a different approach setting GLIDE_SLOPE_MIN from 15 meters to 50 meters , so the altitude changes would happens immediately but the plane after a rapid altitude change decided to crah to the ground almost vertically.

While I think there is a real problem with the TECS controller since the simple mission described above simply fails, the L1 controller works great .as well as the other controllers , FBWA flight is perfect as FBWB or Loiter and RTL .

when I tried to tune it during several flights , the results were really bad, nothing seems to work as expected and the plane behavior was erratic and not repeatable.

Hi Lucamax, same problem for me, hundreds of autolanding tests and plane’s behavior always erratic and not repeatable, with lidar, without lidar, with strong wind, without wind, etc. etc. Autotakeoff and the rest of the flight works really amazing, but autolanding never was reliable, and when you see for instance the Sense Fly Ebee landing in the hands of the operator, it hurts (I love arduplane and open source!)
I am still on 3.8.5 but after reading the changelog on 3.9 it doesn’t mention anything about landing improvements.
Have you made any improvement since this post?
Thanks!

This could answer to your question , if you need more send me a message