In the last year i was able to design and build a hybrid VTOL UAV. The Hybrid is named after Odin’s two ravens (Norse mythology). I used both names for the double functionality of the UAV, it is able to perform vertical flying like a helicopter and energy efficient flying like an airplane. Furthermore, HUGINogMUNIN serves some of the same purpose as the ravens did for Odin; The Ravens were sent out in the morning to gather information, which was passed on to Odin after their return in the evening. Which is why he was so knowledgeable!

HUGINogMUNIN is equipped with a sensors system for autonomous navigations, precise sensor stabilizing and registration of Tait-Bryan rotations (“Pitch, roll and yaw”). The Hybrid is further equipped with a spectrometer, measuring incoming radiation, along with other multi- and hyperspectral image creating sensors from Imec and Ximea for reflection measurements. HUGINogMUNIN makes for a very efficient tool in collecting the data needed in high-precision agriculture.

This was only possible with the great documentation and possibilitys of ArduPilot.
The community was always there to help out! 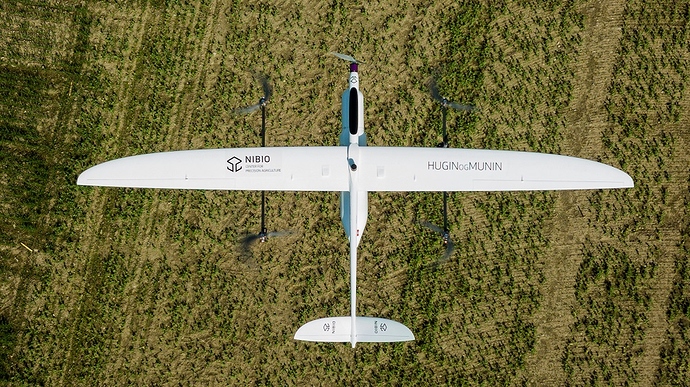 good job, how did you record the onboard footage?

I used a 360 degree camera and edited the footage.

Wow this is fantastic. I’m actually trying to work on something similar for farmers in India with small holdings. Excellent work man!

Very cool! Would you be able to supply more info on the hyperspectral imager?