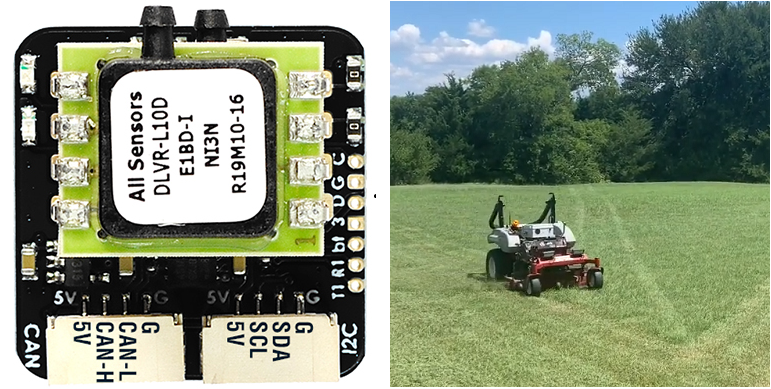 Here are the slides from the monthly report for Sep 2020 presented by Tridge, Randy and a few others at the monthly Partners call.

The image on the left is of MatekSys’s new digital airspeed sensor. It uses the DLVR sensor which has much better stability than many other airspeed sensors and can be connected using either I2C or UAVCAN. The software on this airspeed sensor is AP_Periph which could be described as “ArduPilot for peripheral sensors”. This makes it much easier for manufacturers to release UAVCAN enabled sensors because they can re-use ArduPilot’s build environment and vast array of existing sensor drivers. Because the software is open source (GPLv3) the manufacturer and/or user can modify or upgrade the software on the device.

The image on the right is of Yuri’s autonomous mower that makes use of the GPS-for-Yaw feature that is coming in ArduPilot-4.1 (Rover, Copter and Plane). Removing the need for a compass is quite important especially for large metal vehicles so it is fantastic to see this working well.

As always, thanks very much to our Partners for their support and engagement with the dev team!

That looks pretty cool, would GPS yaw be able to used on something like a multi-rotor or is the precision not good enough for such applications? Cheers!

@Lachlan_Eggins, it should work on any vehicle but it needs to be large enough so that the GPSs can be placed 30cm apart. So that’s a big-ish copter. It’s also possible though that GSF (see video) may allow us to do without a compass using only a single GPS but this idea hasn’t been well tested yet.

Ah ok, so its using a triangulation method to keep heading, sounds very interesting, I have a large octocopter where i might be able to try this on (just because i can

) Got about 45cm separation between 3 GPS units if I were to mount 3, so I will see which direction the build goes but if I get up to the stage of doing something like this I may look into doing some tests related to the topic.

@Lachlan_Eggins, sounds good. by the way AP only supports 2 GPS at the moment. It’s certainly possible for us to add support for 3 in the future but at the moment it’s 2.

Yea I already knew, maybe running a self compiled version of arducopter would be the way to go

I will see how things go!

Hi, i posted this in a other topic, but try this way instead…

We are currently developing/using a gasengine from Pegasus. All the communication to it is over canbus, and its critical for us to have this values when we fly. I know the Pegasus people reached out to you, for making it work with the arducopter software on the cube.

Is there any progress with this in the near future? If not, is it possible for us to do a inqury and pay you for the customization?