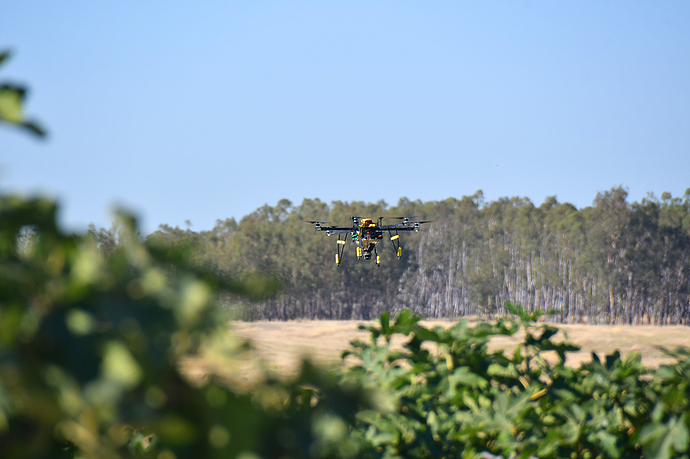 I built this Vulcan hexa for Dropcopter. This system does crop pollination via Mission Planner. Pixhawk 2 with Craft and Theory Flight Deck and Mauch Power system.

Great article, thanks.
It’s a pity there wasn’t a bit more drone footage and a bit of MissionPlanner - although I realise that’s not the point of the story.
I swear that just listening you can tell it’s a pixhawk and arducopter powered craft - probably because most of the contenders are DJI.

The Hero 7 and mini quads are taking a dent out of DJI. With the looming specter of spying and the relative ease of becoming a “pilot”, drones will continue to get a bad name. I focus on trying to make these robots do real work.

Here is some footage of the test flights a day before the shoot. I used a Typhoon H with a Wizard Wand to follow the Hexa. Two drones flying autonomously at once. Nerve racking, but great footage!
Video Link

Clever application (bees). Congratulations to you and Dropcopter both.

Cool!
Do you think you could add a picture, and we can tag this to the blog? That way it goes to the homepage, and more people might see it

Ask and you shall receive…

Thanks for this link! As a side note, we’re moving towards using “ArduPilot” and then calling the individual vehicle firmwares simply “Plane”, “Copter”, “Rover” so I’ve slightly changed the title, hope that’s OK.

It’s all good. We have been featured on the BBC and FrenchTv all within a two month span. More drones and bots to be built!