Hi there,
I have an hexa that i’ve updated to 3.5.0-rc10 and last friday something unexpected happened.
I did a take-off in Stabilize mode and then switched to PosHold, then loiter and Guided, as soon as I see the hexa changing the yaw to go to the waypoint I see it droping in altitude eventually reaching 0. I tried to switch to stabilize mode while it was at 6m but it did nothing, it continued to descend and reached the water and even with full throttle I couldn’t make it go up.
Looking at the logs I can’t understand why did this happened, never had this behaviour before, always recovered my platforms by switching to stabilize and giving it full throttle, why didn’t this work this time ?

Carl,
I’m unable to download the log, can you have a look that the permissions are ok on that file?

By the way, the most likely cause of the vehicle sinking is that the altitude was specified as absolute instead of “relative to home”. if you’re using Tower, I think there was an issue with Tower sending the wrong altitude type but it wasn’t exposed until we added support for absolute and terrain altitudes to copter. This issue was resolved with a follow-up tower release.

looking at your *6.BIN file.:
your CW rotating motors perform less than CCW
you are climbing at >60% of available throttle.
Then motor 3 fail, (and stays at 100% demand)
To maintain attitude, motor 4 is lowered to idle.
With the effective loss of thrust eqiuvalent of >2/6 motors , the throttle demand is 100%, but there is nothing your input can do at this config (with headroom for yaw) to reduce the sink rate.

To have proper hex redundancy, you need to have more power reserves.

So am I underpowered ?
I’m currently running DJI E800 with specs:
Max Thrust 2100 g/rotor
Takeoff Weight Recommended 800 g/rotor
350KV
Propellers 13x4.5, with two 6S 7000mah in parallel and the copter AUW is approx. 5.7Kg.
I know the hover throttle was about 60% and it was hovering fine, but as soon as I started the mission it went down.
Am I pushing the limits on this setup or what (if so, is there anything I can change to improve it) ?
I mean, it was flying good, that is until I started the mission.

most of all, you had some sort of failure.
Lies about performance in this industry is nothing new, especially for DJI, - IF the power setup actually provided close to 2.1Kg thrust at that time, your setup (5.7kg) should hover with 4 motors at about 70% throttle. , or ~85% with yaw headroom…that is … in theory, and no, that is not good enough for safe return if you expect redundancy.

You can check if the motors/ESC’s can take bigger propellers to get more thrust, (test, many operate with some sick definition of “constant” current lasting up to 30sec, and thrust being rated at maximum battery voltage (while you want it to be enough even at least down to 3.4v/cell) )

Thanks for the logs. I had a look at them as well and as Andre-K has says, there’s definitely a mechanical issue. Right from the start there is a very large motor imbalance with three motors (1,3,6 all clockwise spinning) near maximum and the three others at 50%~60%. 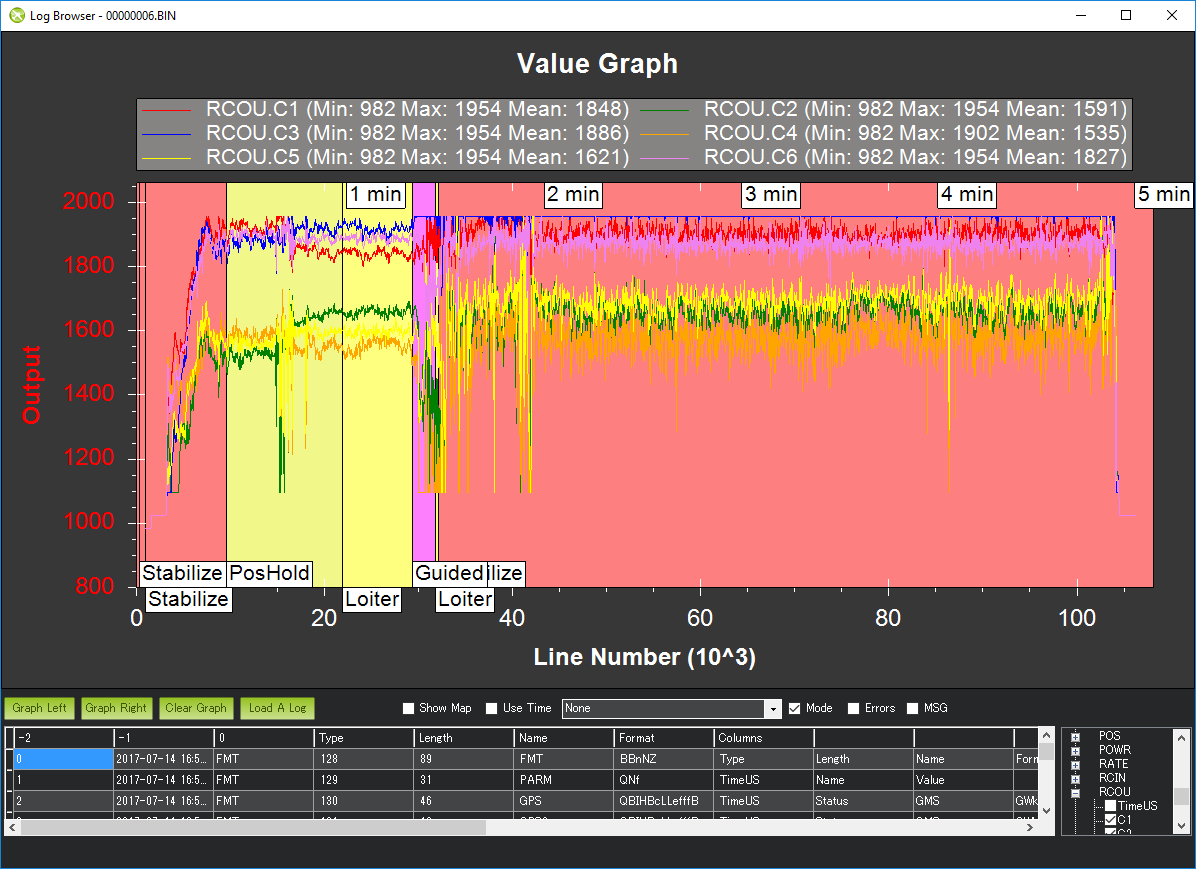 Thanks for taking a look pal. What could have caused that ? I really don’t know where to start looking… Could it be the additional weight causing this ? But why only the CW motors?

Ok, so I had two more flights and results are a bit inconclusive for me.
First flights were without any additional weight (AUW ~5100grams) and hexa behaved good, did the missions successfully. (log here: https://ufile.io/cflnq)

After this, I added some weight (435grams) to the hexa, now with AUW 5535g), and all good too.
Then, I added another 435grams (AUW 5970) and this is were I start to see bad behavior, the copter doesn’t want to hold the altitude and starts descending by its own.
(Log here: https://ufile.io/vgt7z ; Note: this log contains both flights, and if you plot CTUN.ThrO you can clearly distinguish first flight and second one, with spiky throttle)

What I did noticed on the second flight AUW ~6000g) is that from 60% to 100% throttle, the motors doesn’t make any different sound, it’s like they stopped giving more power at 60% throttle, which is very weird for me.

Did an interesting test, a single 350kv motor really produces 2000grams of thrust at 100% throttle @ ~13amps (directly connected to RX channel), however, when using the stabilize mode looking at the logs it seems that there was never a request to pull more than ~7amps per motor , thus not being able to handle the extra weight. So why is arducopter limiting the power ?

Did you measure the 2 Kg thrust or it is just the motor manufacturer data sheet ?

I have indeed measured. Not only the thrust but also the current consumption and got 2000grams at ~ 14amps