We’ve come across a sporadic issue with yaw stabilisation on a copter with a Navio 2 and Raspberry Pi 3 onboard.
We’re using an external HMC5883L that was calibrated with the onboard calibration method using Mission Planner. All other compasses are turned off.

As you can see on the video the copter tries rotating itself on the 3:35 and 4:20, although no commands were given to do so (RCIN.CH4 is constant all the time). It seems to me, these rotations corelate with ATT.DesYaw in the log.

It’d be greatly appreciated if anybody could take a look.

Guys, I don’t want to be annoying but it’d be great to know if anybody had looked at the logs and tried to make sense of the issue. I’m no EKF expert in any way, so I cannot understand why anything like that could happen.

Hi,
I’m not going to be much help, but can say I’ve been posting logs about the random yaw movement for a few months now…(with the pixracer flight controller). I don’t think any devs have ever replied to any of my posts about it… A few other users have said yes, they see the issue too, but that’s it.
It’s my guess that they know and are working on it…

I’m not sure exactly what is going on when it happens, but it seems to be related to GPS… Like it always occurred when a satellite dropped. But also re-tuning my copter helped as well… My yaw tune was a little sloppy, and once it was locked in, the yaw movements were less, although still there. (But as I always say… the exact same copter w/ 3.3 did not have this issue).

Personally, I quit using 3.4 until a new release is out…

It is notable that drift happens on the desired yaw, not on the IMU estimation, so it is hardly related to the magnetic field or GPS. Something is actually commanding it to yaw.

Also reported in this issue:

Is this reproducible? If it is, does it happen always in the same flight mode? If it is, have you tried master?

I noticed that sometimes during decent in RTL mode, see picture attached. 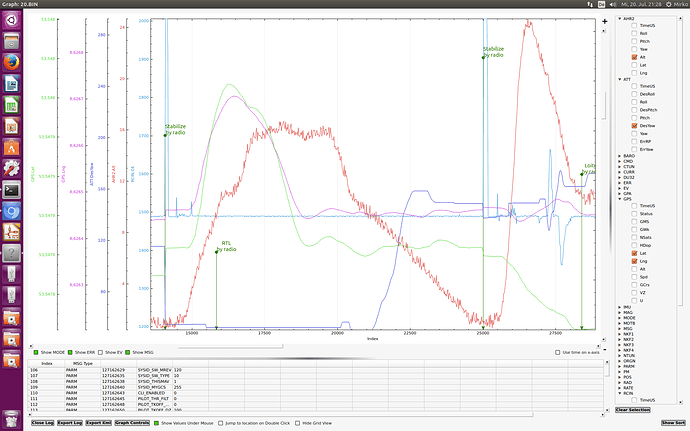 This is a relatively simple issue of your yaw controller becoming overwhelmed by the external forces on the copter. The maximum error is currently 10 degrees so the desired yaw is dragged by the copter.

If you run autotune on yaw you should get a more aggressive yaw control and that should fix this issue.

Could others having yaw issues post links to their posts where they have described their problems and posted their logs and I will take a look.

I apologize but I and many of the other devs have been extremely busy and have not been able to keep up with the support. Thank you to all those people helping out the community with log analysis when we can’t!!!

Thanks for your answer, Leonard!

We’re going to test your proposal on Thursday and I hope it’s going to hold true. The only thing that’s been bothering me is that the yaw error is bigger than 10 degrees.

It happens to me also with the YAW but also with Altitude .

Des Alt change without any input and worst the copter did not respond to radio commands , very dangerous behavior.

Please don’t cross post between versions, a lot as changed between 3.3 and 3.4, nothing says it is the same issue. And this was for rc1, we are in rc2 now.

Well, at least the developer will know that the problem was also present in version 3.3 .
Didn’t this would help ?

No, because no one said it was the same issue. And we can see all forums, there’s no need to cross-post things.

It is exactly the same issue .
The proof is that with Autotune YAW the problem is solved now .
Non need to cross.post ?
It took me hours to find the solution .
The problem that arise to me is something EXTREMELY dangerous .
It should had the maximum of visibility !

I do not want to be ungrateful towards the developer community but how is it possible that the EKF decide what is better and the human do not know what is happening even looking at logs ?

EKF in my opinion was developped to fix poor design of the horrible 3DR Iris , a vibrations generator , old non EKF failsafe system was good enough .
That EKF is a monster and what did the developers ?
They decide that you cannot choose anymore to disable it after version 3.2