Just finished building 500 size quadcopter with 750 KV motors, Simon K ESCs and 11’ props. Have loaded Arducopter 3.2.1 and activated Autotune on CH 7. When Autotune is activated it completes roll and pitch tests successfully but as soon as the Yaw test starts the model goes out of control and looses power. Not sure what caused the first crash I did another flight with Autotune enabled and the same thing happened. The on-line guide says that I can turn off the Yaw check but there are no Autotune settings shown in any of the parameter lists? Have these been accidently left off this version and if so will they be reinstated in the next version?

3.2.1 doesn’t have the autotune bitmask. 3.3 and above does. And if memory serves correctly, 3.2.1 doesn’ t have yaw autotune, so not sure what is happening on yours.

Twice now it has crashed out of control after or during the pitch tuning I assumed this corresponded with the start of the Yaw tuning. I have tried to load APM Copter v3.3.3 but after updating the firmware Mission Planner continues to show version 3.2.1? Is there a trick to getting APM Copter v3.3 to load on an Arducopter 2.8?

Once again, 3.2.1 does not have yaw tuning, just pitch and roll.

If you are using an Ardupilot FC instead of a Pixhawk, then 3.2.1 will be the latest firmware you can load.

Thanks for the info.

I’m using 640Kv motors with a clone APM2.8 board and AC3.2.1 on a quad. I never had very good luck with Auto Tune at all. Just tune the PID’s manually, starting at the sluggish end and work your way up until it starts to get twitchy, then tweak it back a bit.

Your ESC timing may need to be adjusted too for lower Kv motors, as most ESC’s operate at too low of a timing advance for anything much below 700-800 Kv where the motors are usually spinning big props and running at their peak torque. I have NOT had good luck with with ESC’s with SiK firmware. They run hot and the adaptive timing does not work all that well. On my newest quad build (688mm with 3508-640’s spinning 16 x 55 props) I went with Lumenier 32-bit ARM processor “Silk” ESC’s that have a good adaptive timing routine and 1480 throttle steps. Night and day difference between those and SiK-based ESC’s.

Thanks for the info. I am going to have a try at the manual method using channel 6 when the wind drops a bit. Would you mind sharing your PID settings to give me some idea of the direction I need to go? Thanks Paul

Paul, am out right now - I will post a screenshot from APM Planner2 when I get home tonight. Basically, I did not use Channel 6. In the Basic Tuning in APM Planner2 there’s a slider that you can slide left and right. Left makes the copter more sluggish, right makes it more responsive. I first made sure it was very snappy handling in Stabilize Mode, but I turned the yaw down just a bit for Stabilize. Then I went to Alt Hold and used that slider, starting at the left side, and made repeated test flights moving it a bit to the right every time until it got twitchy in hover. Then moved it back a bit and that’s what I’ve gone with.

Again, making sure your ESC’s are running at the correct timing is also important before you start tuning PID’s. Few ESC’s are compatible with lower Kv motors. High speed, low torque motors will run at 5-10 degrees timing advance. However, lower speed, high torque motors will many times require 20+ degrees of advance. If the motors are running at too low of a timing advance level they won’t be responsive and the copter will be unstable. Lower Kv motors with larger props don’t change speed as fast as high Kv spinning smaller props. So that’s an important thing to make sure you got right before you proceed with PID tuning.

I set ESC timing by running a motor and prop combo on a homemade test stand up to full throttle and advance the timing until the motor starts to screech or whistle. Then back it off a few degrees to stop the screeching. Some ESC and motor combos aren’t compatible at all, and timing problems on a quad are going to show up especially in yaw where two motors slow down while the other two speed up a proportionate amount, and all during this the flight controller is trying to maintain altitude in Alt Hold. Since your problem appeared to be primarily in yaw, that’s why I mention that factor.

Paul, here is the PID settings I settled on. Again, be advised that my copter is bigger with lower Kv motors and different ESC’s than you are using. But this is what made mine fly like a champ 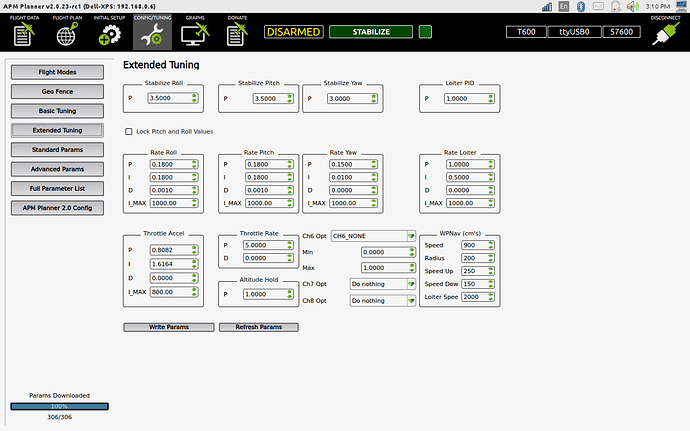 If you’re looking for damn near trouble free ESCs, check into HobbyWing 40A (or any of those). I tore my hair out trying to figure out what was wrong with the ESCs when I dropped down to 380KV (after using Castle Creations which worked great for the 580s I had). I switched them out with DYS (junk) and tried to force the DYS to work until I got the Hobbywings. They have their own proprietary firmware on the ESC and they work great. I have 320s on their now and they still work great.

Yep, with low speed motors the stator phase has to lead the rotor poles by 20+ degrees. The slower they turn, the more advance it takes to develop torque. Power to the prop is torque x rpm / 5252. If you don’t have speed (high Kv) then you need torque to develop power. If the timing is running too far retarded your 'copter will fly like it’s drunk and you can waste two weeks PID tuning and you won’t fix it

I like to hear my motors start to whine at about 50% throttle and by the time they get to full throttle they sound sort of like a turbine spooled up. If they screech or howl, then the timing is too far advanced. If they run quiet at full throttle you don’t have enough.

Many thanks for all your help. Hoping for some nice weather this weekend to try out your suggestions.

Chris, tried your setting today and wow what a difference. rock solid and responsive. Tried changing the gains a bit using channel 6 but settled on your values which seamed to suit my Quad perfectly. Many thanks. It is a shame nobody has put a database of settings together for different size quads and kv motors. It would at least give beginners like me a chance of having a stable model on the first flight!

Glad you got it flying good, Paul.

I think it would be hard to put together any sort of database like that simply because of differences in ESC’s, motor and prop combos, and likely no two homebuilt multi’s will have identical motor alignment. I think (but not totally sure) that the defaults are sort of for the Solo. I found out right away that didn’t work for mine. Good to see that the settings worked for you too. When I make any changes I like to save a copy of the old Full Parameter List before I make any changes to test. If the changes don’t work after a bunch of tweaking it’s pretty easy to go back to the original by simply loading the file and comparing what’s in the FC vs what the file has, and change the appropriate entries.