I have some “strange” beeps from the buzzer connected to A5 when flying, probably indicating a problem of some kind. It’s like “beep beep beep beeeeeeep”. I can’t find this documented any place. Some ideas?

Any of these? - youtube.com/watch?v=j-CMLrAwlco
Description sounds like 0:54 seconds - GPS Failsafe/Glitch

Not sure if anyone still reads this topic as this is my first post here. But i am having the same problem,
When it is in midair i hear this same tone a couple of times at random…no problems controlling the quad at all.
Must say that loiter isnt working but i just build this quad a few days ago and it is my first, so not sure if that is due to the error beep.
Does anyone have a wiki/youtubelink/site where i can finf the beep error codes for a APM??? i found quite a lot for the pixhawk, but not for the APM.

If it is a short tone that is higher in pitch than the second, longer tone…that is the radio failsafe that has been added since the video above.
Not much documentation on it yet.

If you just built, make sure you have a good green lock before attempting loiter.
Even when green for the first time, wait another minute to lock in more GPS sats.

What is the actual loiter behavior you are seeing?

Thanks for the quick response! But i think you are mixing up FC’s. I have an apm 2.8, there is a blue led for GPS and a red one for arm state. The beeps can only be one pitch on this board. There are 3 short ones and 1 long one…i am suspecting something with the GPS, beacause when i engage the loiter flightmode it starts to drift away, and the althold mode works fine. So now I programmed positionhold on one switch and will try that later this week.

Sorry, but all I have ever known are one long beep for arming, one short chirp for disarm and constant beeping for low voltage alarm.
And that is extensive work with APM 2.8

As far as the loiter working as you have described, get the craft connected to Mission Planner and make sure N is north as well as the other points.

other things that might be throwing you off is a jumper pin next to the GPS input. 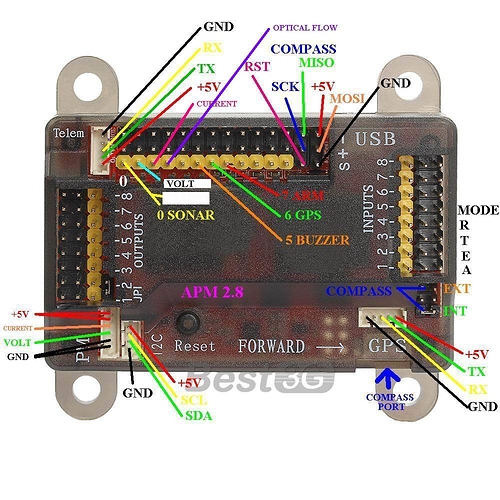 And make sure compass orientation is roll 180

Thanks a lot!! I allready found out the jumper, but the orientation change is new for me!! I will try to adjust this tonight, i live in the middle of the city, where it is illegale to fly so i will try to test somewhere this week, but again, thanks for the help!

And if the compass north isn’t the real north, is this just a case of calibrating the compass?? (Maybe a little further away from my steel desk

If it is not real north, it is part of calibration.
But what you are looking for is that reading north is not actually facing south.
Or, east is actually east and west is actually west.

Some fliers think they are OK when North says north.
But if east is not east and so on, there will be trouble.

Also, make sure you have external checked in the compass section of calibration.
This should automatically pop in the roll 180 value.

Thanks! Will check all these tonight

worked like a charm! compass is very acurate now! i will test fly somewhere this week and let u know how loiter works now!

Outstanding! Just start out low and slow but make sure to give it that burst to get off the ground.
Don’t ease into the acceleration…it will tump over for sure.

Did some low altitude testing in the garden and maybe its my imagination, but it feels more stable. I also added my gimball and noticed that because off the extra weight i need to give it much more throttle to get airborne (as suspected off course

) , but it works really good, so happy face here. I will get back when i tested it more in an open field.

Great to hear!!! and welcome to the world of tinkering

Tested in a large field last evening, works like a charm!!! Thanks a lot. Loiter is much more stable, it still moves a little bit, but that might be because i didnt fly in auto tune yet as it will not do anything when i hold the arm position for 20 seconds…i will get in to that when i have more time, but it stays in one place more or less in loiter so i am very happy!!

That is AutoTrim - and per advice of others, stay away from that.
You can achieve the same results with a very good accelerometer calibration using the beer bottle method or a carpenter square.

The real AutoTune you are looking for requires you to set a flight mode for AltHold (Altitude Hold) and set one of the POTs to have AutoTune activate when the POT you selected reaches it’s high value.

In a HUGE area, go up about 25 feet, Switch to alt hold, make sure the craft is relatively stable then switch on the select POT.
Watch the dance!
If the craft drifts away, pull it back to you and Auto Tune will resume.
Roll first then pitch.

The craft will just hang there when the AutoTune is finished.

If for some reason AutoTune does not restart after pulling the craft back, try adjusting the altitude but keep your Alt Hold switch active.

OK, good to know not to use autotrim. I found out in mission planner that there is a flightmode called autotune, is that the same? I programmed it on a position of my flight mode switch…maybe I will try it today but not sure if I have time.
What exactly can I expect? Will it move around a bit by itself to measure the “reaction” to a certain input?

Can you explain the beerbottle method

? Is this just placing my quad on a beerbottle to balance it???

Here is a full explanation to AutoTune - how to setup, perform and what to expect:

And here is some reading on the Beer Bottle Calibration method:
http://www.rcgroups.com/forums/showthread.php?t=2662147&highlight=Beer+bottle+calibration#post34748197

Ton of info here on all APM based Flight Controllers:
http://www.rcgroups.com/forums/showthread.php?t=2112759

So, when you grow out of your craft and start building, so long as you use APM2.6, 2.8, PixHawk, PixRacer and next month they say…PixHawk2…you have tech support from them even though the title of the thread is CX-20.

And again…thanks a lot! Been flying this afternoon, but for now I only have a 6 channel tx…I already hacked it to 10 channels but I have to assemble a ibus to ppm converter using an arduino. As I am nowhere near capable of programming an arduino I have to wait with it till a friend of mine has some time. So as soon as I have that I will be auto tuning. But for now I have a lot to read

If you are really REALLY going to get into this hobby, I highly recommend the following with a PPM converter: 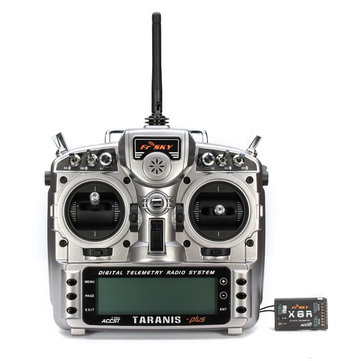 I took the long way around and started with a Turnigy 9X transmitter setup.
I then got the Smartieparts.com upgrade that allows me to program and customize the Tx with firmware from the Open RC projects.
Lets me do stupid things, like this:
https://youtu.be/P0uEebFaPfA
Mod links are in the description.

But then after that video, I got the FrSky XJT transmitter module and X8R 16ch receiver.
Before, when I do a construction survey, I would rely on the auto mission failsafe to continue the mission.
I would have LOS every time I ran it and the max distance was just under 1000feet (300m)
With the FrSky setup, I not only maintain Tx/Rx contact for the survey missions, I also remained in contact for this:

You can go shopping for the best value but remember, you want the Tx/ X8R Rx combo.

… For now I am all right with my flysky, but if I ever need another one I already know what to buy

I have to say, the RSSI part is what I am really missing on the flysky, as I am from an era where we were using 27mhz tx/RX combo’s with absolutely nothing that even sounded like failsafe

so I am scared all the time that I lose signal, but on the other hand, today I found out that my failsafe works perfect so I think I can ease up a little and be all bit less scared for that