Hi everyone. There is a new release of APM:Rover which is also for Boats. Details here:
http://discuss.ardupilot.org/t/rover-3-0-0-release/8267
Note one of the exciting things for boat users is the new EKF2 which should greatly improve arming of the boat whilst its on the water. Give it a try and let us know how you go!

I have it loaded and will give it a workout this weekend.

Looking forward to hearing how you go David.

Outstanding!! I ran 3 km today. Repeated the same mission about ten times. I was using the EK2 and it seems to have cured my over steering problem I was once having. The mission was 12 waypoints zig zagging around buoys in the water. Port and starboard turns from 45 to 150 degrees and the boat tracked perfectly and consistent. Learning and Steering mode worked just fine and I had no problems when I enable my joystick and controlled it with that. I don’t know what cured my over steer problem. Maybe the EK2 or the new NAVL1 XTRACK Parameter. It seems to be a huge improvement.

@gmorph, If I set ARMING_REQUIRED to 1 how do I arm the system? I use a PPM encoder and all the wires are not hooked into my receiver. So if it is left stick down and to the right then that’s my problem. However I tried arming with mission planner and I could not. For now I have ARMING_REQUIRED set to 0.

Any Ideas?? I have never had to arm the boat before. I guess I need to know what the code is looking for in order to arm if ARMING_REQUIRED is set to 1

I’ve nearly got the wiki page done. You need to hold the stick to the right only to Arm. If it doesn’t ARM then it means the autopilot is unhappy and you will need to diagnose the issue. You should seen an error on the HUD if it doesn’t arm.

In my case, i have somes big issues with this release, perhaps a compatibility issue with my board (the Dropix board by Drotek, based on PX4)?
-The firt WP is joined correctly but after, the arduboat waving a lot and seem follow another parralel line.
-If i change the PID setting and so, there are no change on the arduboat behavior.
-When the arduboat joined the last WP (not in the same location that the google map…), he goes into loiter turning mode automatically!

I downgrade in 2.50 and now it’s working perfectly.

If you could provide a dataflash log of the mission when the boat had a problem I will have a look. I’m not getting any complaints about the 3.0.0 release so I’d love to see your log in case there is a bug you have found.
Thanks, Grant.

I am just getting a sailboat configured using RPi3 with Navio2 onboard.

I downloaded ArduRover to do some initial testing in Mission Planner. Is ArduBoat a separate application? In ArduRiver the overlap of the map shows a four wheeled vehicle overlay. Is that now a boat shape?

APM:Rover is the same application for Boats or Rovers. If you install it on a boat you will still see the Rover icon.
Thanks, Grant.

Thank you for the response.

Yes I am aware of that. My question is could the rover icon be replaced with a boat-shaped icon and have an ArduBoat version with a boat Icon. or… Can that icon be modified somehow?

Yes we can do this. I need to add a frame or vehicle type parameter that you set depending on whether you have a boat or a rover. Its on my TODO list.

Thank you for the update. This would be great if you can do this, it will add a lot to the project that I am working on. You may want to consider a graphic shaped like the one I am attaching as it would work for both power and sailboats in the Ardu series.

Also, if possible that the graphic can be made of two colors (red & green) you could indicate bot port and starboard which would also be very helpful for Ardu-boat.

That would be cool to add a boat!

If we are going to the trouble of adding navigation indicators, which would be very cool, then I would suggest we make it as accurate as possible and keep from the centre line on the bow to midships red on port and green on starboard and the aft from midships to midships white.
In reality it should be from zero degrees (centre line of the bow) aft to 112.5 degrees on port and starboard their respective colours and the aft 135 degrees should be white. That is for boats over three metres boats under three metres should have a single white light visible 360 degrees.
But for this application the three colours with centre line to midships break points would be accurate enough. 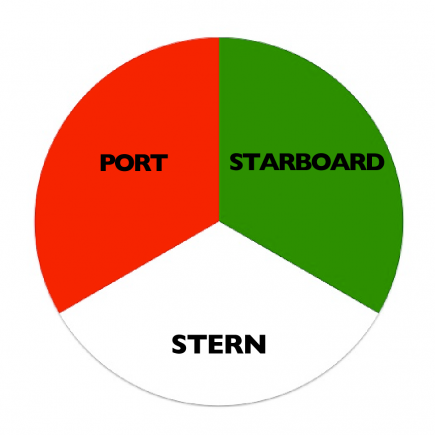 Just my 2c worth.

Please understand that it is the graphic “shape” that would be the most visual change since currently the icon is a silhouette of a four-wheeled vehicle. The port & starboard coloring do not need to necessarily need to following vessel lighting arcs, but to give a good reference when maneuvering around a course.