I finally got my APM 2.6 flying good, but now it’s going nuts when I engage Loiter mode, it takes off sideways travelling really fast, doesn’t always take off in the same direction, sometimes it goes left and sometimes it goes right.

I also just tried RTL Mode for the first time, I gave it enough time for the blue LED to go solid, meaning it has GPS lock, took off, got up about 10ft, and moved about 10ft to the left, when I engaged RTL mode, it shot up in the sky, and tried to take off speeding to the left diagonally away from me.

I’m also posting a screenshot of what my vibration logs are looking like. I think they are looking very good. 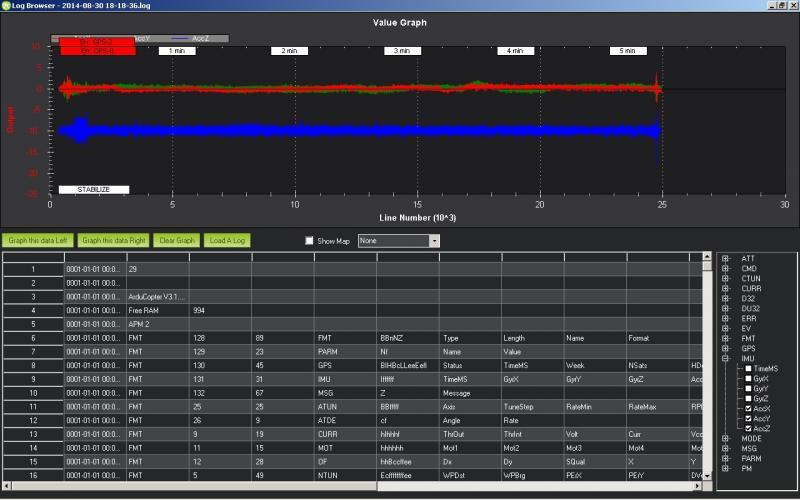 Your magnetometer is not properly calibrated, or installed too close to magnetic field.

How do I re-calibrate the magnetometer? I don’t see it listed on the APM Copter table of contents page.

I have also noticed, that everytime I plug the APM in and go to the compass page on the Initial setup, it’s defaulted back to manual-rotation 180. Even after I manually change it to APM w/external compass.

check if you get data from external magnetometer, (tests) - also; is it actually connected, and is it a 3DR product, or some clone ?

I don’t know how to do all these tests you are asking me to run, I purchased it on ebay. I don’t know if it’s a true 3DR, I don’t have 3DR radio Telemetry. Just the APM 2.6 and external GPS compass. I’m a total noob to these multi’s, I’ve been flying heli’s for 2 yrs now though.

ok, tests are described here ; copter.ardupilot.com/wiki/common … est-modes/
“compass” is the one would try.
not saving a setting sounds bad, maybe defective flash “or I don’t know” - not a common problem.
not doing calibration as expected is strange too.

Anyway - you have a ton of reading to do, you cannot expect help with every singe step - the site covers everything regarding setup/tuning - just read every instructions article.

Help with every single step is what I need because I don’t understand a thing I am reading. I don’t know anything about these GPS units. Don’t even have a clue how to tune a heli and I’ve been flying them for over 2yrs now. Basically, if it involves more than adjusting tail gains, I’m screwed, because I don’t have a clue what to do.

Ok here is some advice you may not want to hear. The apm flight controller is not a plug and play system. The firmware and manual are open source meaning that no one gets paid everyone is a volunteer. Most of the used quads with apm FC sold on eBay are sold because people want plug and play and ars not geeky.
My advice is if you want to use the apm then you will have to knuckle down and learn how to set it up and tune it. If that’s not for you buy a Phantom which is much more plug and play but still needs setting up and tuning. Horses for courses.

Down load the latest version of mission planner plug in the apm go to terminal and connect. Type in erase. You have now done exactly that which is to remove the firmware. Whilst the apm is connected you can also push the reset button for good measure. Now go to initial set up and follow the screen instructions on the wizard EXACTLY including setting the ESc top and bottom and the failsafes. If you do this you and follow the checks you will have a copter that will take off and hover. Now you will need to do trim and trim save which is explained in the manual. Then you will need to do an auto tune. Again it’s in the manual. All of this will need to be done accurately and usually takes me a whole day.

Also get into the habit of downloading the flight logs after each session and erasing them from the board.

If this is too much geeky work for you then the APM is not for you my friend.

Sent from my iPhone using Tapatalk

As I have stated Radioman, I have been flying 6ch CP heli’s for over two years now, and still do not have a clue how to tune one.

Well, I finally got it figured out tonight! I ended up replacing the GPS/Compass module, and it was still doing it, so I got too looking, and the compass orientation was off by 90 degrees, I re-positioned the compass and bam! it works perfectly now!

Well, I finally got it figured out tonight! I ended up replacing the GPS/Compass module, and it was still doing it, so I got too looking, and the compass orientation was off by 90 degrees, I re-positioned the compass and bam! it works perfectly now!