hi, it was a while as we spoke about it - i presume there was still no development on the driver for VL53L1X? i am trying to make a simple prototype on the kakute f7 board with 2 I2C buses that allows usage of 3 lidars - one is a tf mini looking down, for alt hold stability, and 2 VL lidars on separate I2C buses for front and rear obstacle avoidance. only issue is with the range of vl53l0x - it is not a lot, vl53l1x would be much more usable.

Take a look at the POLOLU libraries, I dont think that it would be too difficult , you can start with the existing VL53L0X. If you plan using it outside, it might not be possible to use the actual code, it seems to get blinded by daylight (please refer to the basic test I performed on June 22nd) 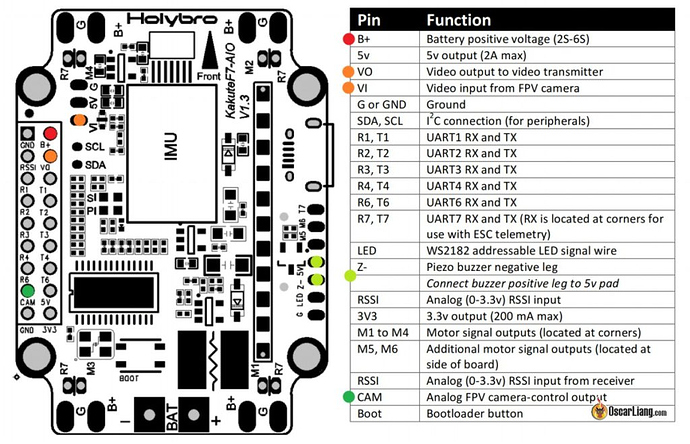 it is possible to make 4 instances - i would prefer vl53 units as they are very small and light. realistically, VL53L1X with its range would be great. and, 7 uarts it is, but they all gets used up - rcinput, gps, telemetry to esp8266, frsky s.port telemetry - etc.

I think you should check with @rmackay9 for this because I just see 2 instances for proximity as well https://github.com/ArduPilot/ardupilot/blob/master/libraries/AP_Proximity/AP_Proximity.cpp#L149

Question, where do you see the other I2C bus ?

i will make it

we can redefine one uart in the hwdef into second i2c bus.

Ahh… Cool !!
BTW I just received a Matek F405, there is a Cleanflight Naze 130 Quad that is about to get a Brain Transplant