We are pleased to introduce a new VTOL quadplane with high performance.

Adler M32 is the new generation of its predecessors Voron M35 and M25 VTOLs. Compared to the Voron M35, Adler M32 has a smaller wingspan (3.2m compared to 3.5m), while achieving almost the same performance. Smaller wingspan makes it easier to operate and carry. The airframe has an aerodynamic design and weighs only 6.5kg, while it can carry up to 5kg of payload — can be categorized under heavy payload drones, with a maximum takeoff weight of 24kg.

Adler M32 has a novel motor and propeller installation. Downward-facing propellers provide a much more lift force compared to conventional designs. The upward curved winglets prevent the negative lift on the wings. This long endurance drone can fly 3.8hours with a 1.2kg payload (4.2hours without payload).
here is the introduction video: 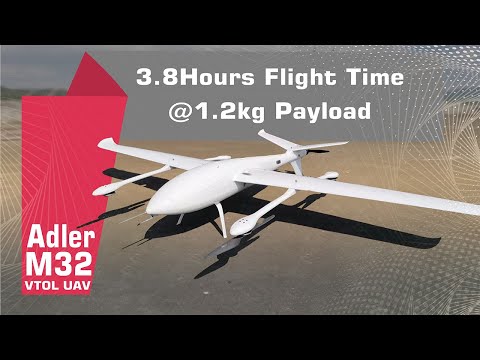 you can learn more and read the comparison here: