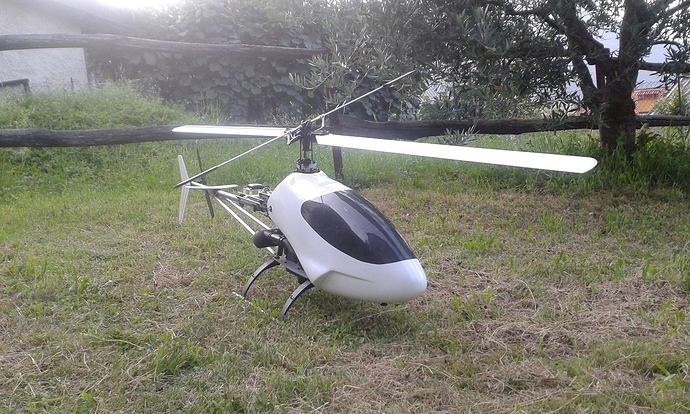 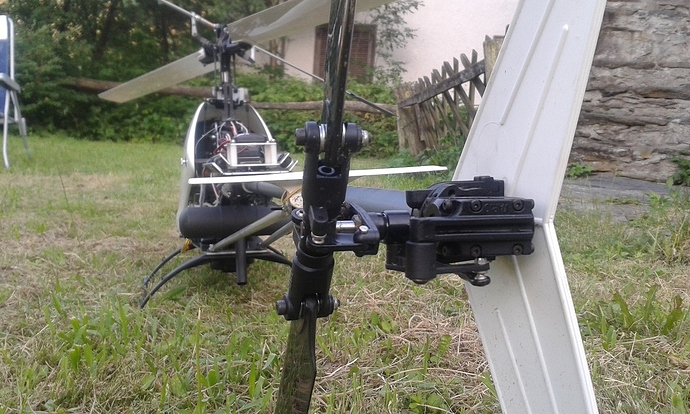 20150709_201729.jpg1280×768 406 KB
I decided to upgrade the firmware on my Benzin Trainer UAV heli. I have made some mods to the 3.6 Arducopter, adding engine RPM governor and 4 servos swashplate arrangement.
The governor has been bench tested only so far (though I already flew similar code on 3.3) , here the video of the bench test using a simple motor /flywheel/ESC and rpm sensor:

The governor is a simple controller based on proportional and integrative terms + throttle curve output acting as a feedforward and failsafe mechanism at the same time, in case of RPM sensor failure.
The governor function only kicks in at 80% of nominal engine RPM value (it can be clearly heard in the above video when the gov starts working), so the soft start function is still valid and properly working.
So rsc_mode 4 has been added together with three more parameters to tune the governor:
desired engine rpm;
gov_p gain;
gov_i gain;
Will update with a video of the test flight as soon as the Benzin gets back to flight line (currently disassembled on the surgery table for annual inspection

Ferruccio,
Disregard my PM. Thanks for the link.

Bill, I did tests on two different helos. One was powered by OS GT15 HZ, which has inbuilt Hall sensor to phase the spark (1 magnet on the engine cranckshaft, 1 pulse per revolution). So I just put an Y cable on it, one end was going to the engine ignition box, the other end was going to the pixhawk. In this video the pix was installed in the electronic bay just to control the engine, for testing the code:


You can hear the engine is 4-stroking a little bit, that’s normal and not due to governor (this engine tends to “run away” very easily, leading to piston seizure, that’s why I kept the mixture a little bit richer).
Then I tested it on a Zenoah powered 800, here the video:

In this case magnets were mounted on the clutch bell ( one south, the diametral opposite north).
So in both cases it was 1 pulse per revolution.
Now, regarding the accuracy, the following images are from the log of the test bench video (above):