$50 Skytraq RTK receiver has anyone used it?

I was looking at this pinout for the gps, does anyone see anything wrong with connecting TX1 and RX2 to the same serial port on the flight controller and enabling RTCM injection? 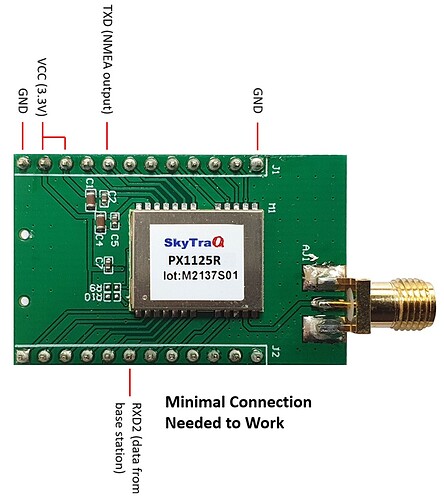 I suspect you could wire the “RTCM input” serial port to a second GPS port on the flight controller.

Even if you don’t get a GPS input to the flight controller, you should be able to route the RTCM out to that serial port to satisfy your input needs for the GPS.

I’m curious about the difference of the Skytraq being L1/L5 vs the F9P being L1/L2 and what that might mean for speed to fix and final fidelity - and under what conditions is one better than the other?

Is there a L5 Glonass signal?

I started doing RTK with some old LEA-5T modules and GPS only using a Raspberry Pi running RTKLib.

It was agonizing waiting for a fix and it wouldn’t stay.

I moved up to M8Ts which were a little better, but still spotty.

The F9P with L1/L2 GPS & GLONASS made a big difference - and I was able to let the F9P do the RTK calculations onboard.

I can use the F9P with a regional NTRIP service, but it’s GPS-only and while it gets a fix, it isn’t as reliable and takes longer than when I use the F9P base I installed on the chimney, I believe at least part of the improvement is adding GLONASS into the mix and coming close to doubling the number of satellites.

I think that’s a fine idea. Neither ArduPilot nor the GPS will “know” the difference.

Finally got my antenna so i can start testing

I have been trying it with public NTRIP but I think there is an issue with the GNSS viewer software that comes with the GPS module, I have tried it with NTRIP servers using the NTRIP client built into the software but it’s not sending anything into the GPS module, next plan is to test with a separate usb serial adapter and NTRIP client and see if it can get RTK fix.

The SkyTraq can receive corrections over the standard RX/TX pins. You can test this in Mission Planner directly (their GNSS viewer is kinda sucky to be honest). 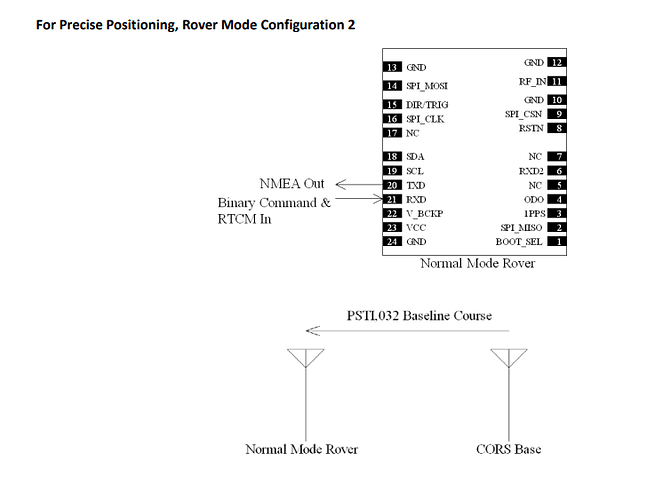 @jedilord I plan on testing injection via mission planner next. I will probably get it wired up tomorrow, I just wanted to make sure it was actually working first.

I have looked at their other modules and the NS-HP-GN2 PX1122R was only 99usd compared to the 50usd for this one, but I wanted to see if the cheapest one they sold was actually usable for ardurover, if It’s not then the 99usd l1/l2 module will be the next one I test.

If nothing else, this might be a cheaper fixed base implementation than using an F9P.

I’m using GPS for Yaw so I have two F9Ps on the rover, and currently a third for the fixed base - it seemed a waste at the time, but it was the cheapest L1/L2 receiver I could find that did RAW (or actually calculates the RTCM messages from a provided fixed position)

I have been looking at mounting options for the antenna, I need to be able to move it to the side to clear the solar panel. Turns out gopro mounts are ideal for mounting gps antennas, you just need a thread adapter to change the 5/8 to a 1/4 thread to use the big antennas or just glue a smaller one to a GoPro thread adapter with the insert removed.

The plastic arm is quite flexible so if your going offroad the carbon or aluminium arms would be better. This GPS doesnt have a compass so im going to get a double gopro adapter and mount both to the arm.

I’m also interested in testing out these cheap SkyTraq RTK receivers. Quick question since you have one on hand, Is the SMA connection on the PCB normal or reverse polarity and is it male or female?

Its an SMA connector, without the pin.

Thanks for the quick reply.

Just want to make sure they didn’t do something weird and add what’s known as a reverse polarity connector on the board. Which of these is it?

Edit: I guess by process of elimination it’s #2 since you said no pin and the pictures on navspark show the male threads. 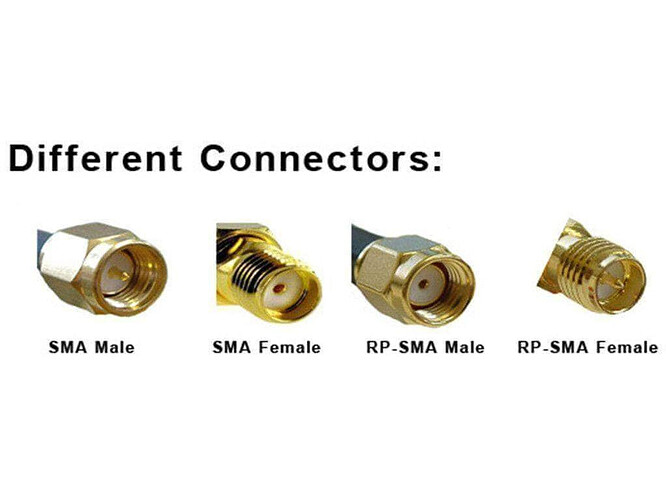 I ordered one of the RTK modules, just a warning, if you’re in Europe you will pay a lot for shipping. it was $50 for the module but shipping was $60 a

I’m interested if you get it working and if you are getting close to centimeter accuracy. I looked at ordering one too and shipping was $60 to the states so I balked. If it works, I might order 2 for a L1/L5 basestation since I am pushing the limits of the free ntrip provider. I think they would be more popular without 60 bucks for shipping.

That is the only place I have seen L1/L5 and centimeter accuracy without the L2. In fact I was going to make a post and ask if it was even possible because my google-fu is failing, and it seems like L5 would be better for a mowbot with the trees.

Long story short i managed to damage my receiver when a ground wire came loose on the 3.3v regulator when i was testing it on breadboard and it got pulled up to 5v killing it. Im going to order another 2 soon since shipping is so high i might as well.

It was qorking up until that point, i never got testing rtcm injection, it got broken as i was wiring it up.

Oh, I’m sorry!! Im a little surprised 5v killed it to be honest.

You MIGHT want to order 1 for a basestation as well. 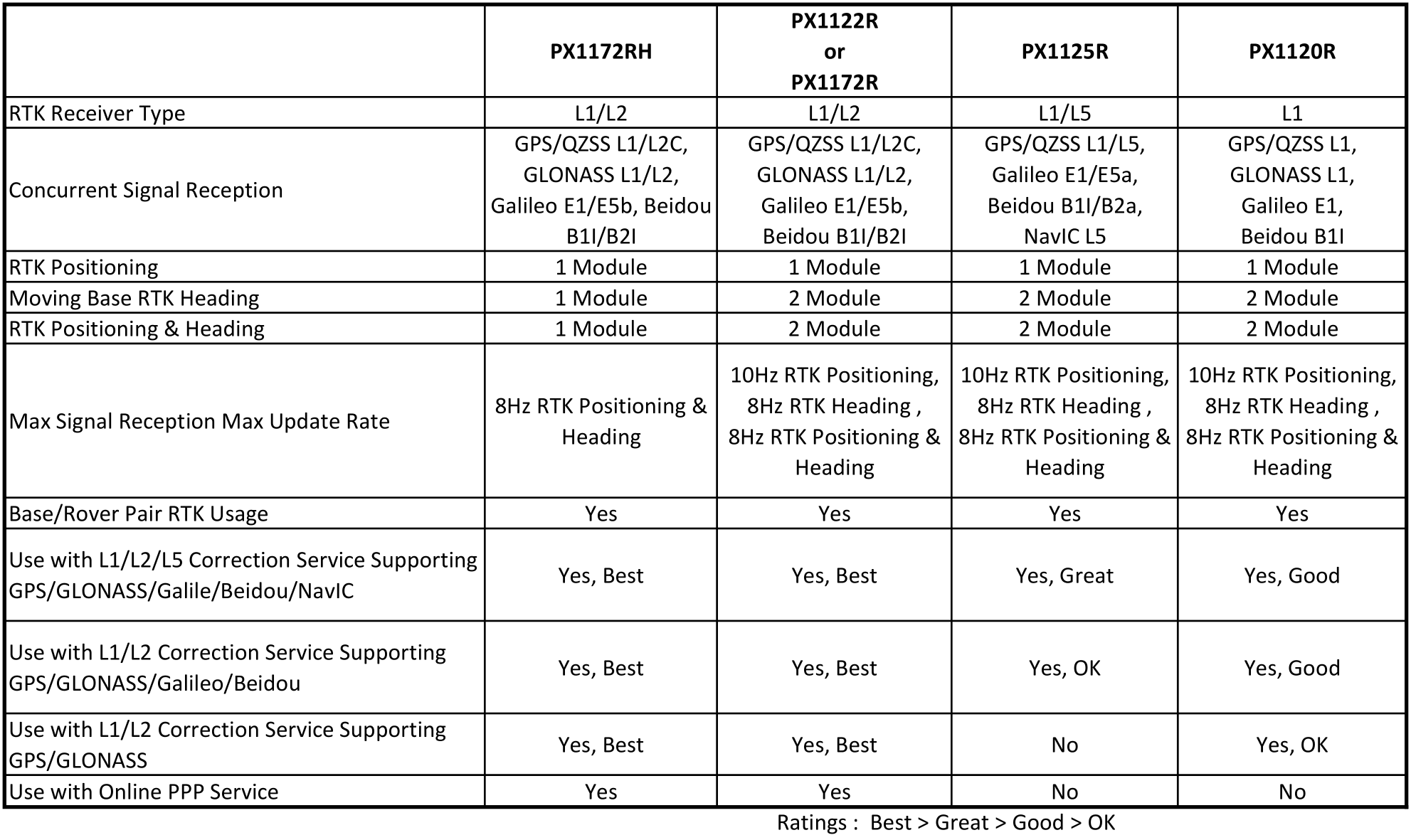 In short, the first chart says you need 2 for heading information for a rover.

Only common signals used by both RTK base and RTK rover are used for RTK computation."

Which then the chart says it even if the rtk base supports L1/L2, the 1125 ignores the L2 data completely.

Yes it can do rtk with just l1 its just not as reliable. I wanted to see if a 50usd GPS with free rtcm would work as the cheapest possible setup. Im not doing anything critical so I dont mind some trial and error getting it working.

Yes it can do rtk with just l1 its just not as reliable.

It isn’t as accurate or reliable. For 50 bucks you -might- be able to get two l1/l5 receivers and try to set up a basestation for rtk. Then you have the l5 signals. Butt hen you need another antenna.

I am kind of in the same boat doing about the same thing except I want 1cm accuracy and my rtcm streamer is right about at the limit for it to work properly.

PX1172RH-HAT looks like a good choice for RTK and YAW in one package for ~$200. Cheaper and more compact than two ArduSimple boards, and a bonus - you only need to use the one serial port on the flight controller.

As long as it sends the right NMEA message for YAW to make ArduPilot happy.

I am reminded, however, that with two F9Ps we can use one for RTK position, and one for Yaw.

With this unit, we won’t know if we have a RTK Fixed Yaw only, or a Fixed Yaw + Fixed position from the base.

You won’t know when there’s an interruption in the feed from the fixed base.

@geofrancis any latest update, also need to have a word with you regarding skytrq ? do you have discord ?