It’s the second time that this poor copter decides to rotate 180° and crash into the ground. I wasn’t doing anything weird, hovering in alt-hold gaining altitude slowly:

(it loos like that I can’t draw the BARO altitude, so I draw the GPS one, it’s lagging)

Vibrations (is the Z axis of?)

This is the biggest correlation I could find so far. RCIN1 (bank angle?) leads to a power cut of every motor that leads to the crash. 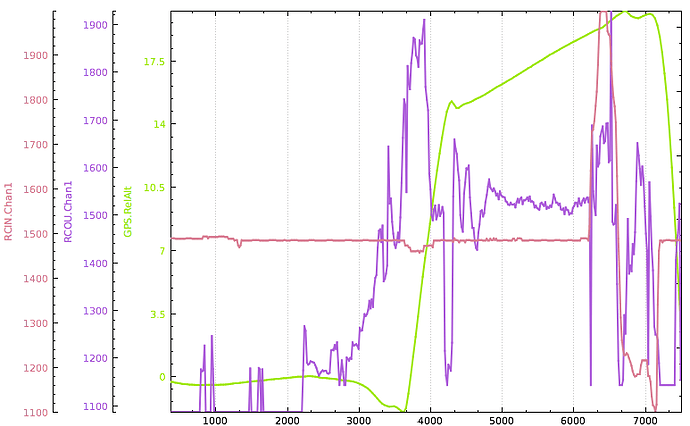 I suspect a failure of motor #2.

I’ve tried to fly this hexa without a prop before, and it did so just fine.
Also, once crashed (luckily in high grass), the hexa was working again just fine.

What makes you think it was a motor failure? It doesn’t make a lot of sense to me.

Well, you must’ve had a CG toward the opposite motor, because a hexa with a centered CG can’t control all 3 axes (roll, pitch, yaw) while missing a motor.

The reason I suspect motor 2 is that it got pegged at maximum when the problem happened.

Anyway, this particular kind of problem is almost always a powerplant failure. Exception is when it is a bug (I caught the bug that was exacerbating sync problems and causing autotune to crash on 3.1.2) or attitude failure - but there’s no reason to suspect either here.