Hi; I was wondering if it’d be possible to use Google Earth Pro 3D data to plan survey in Mission Planner.
Thanks

Ardupilot has Terrain Follow feature which uses the same SRTM data. The same elevation information can be seen in mission planner in the top right corner. 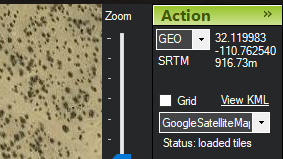 Is that what you’re trying to achieve? Hope this helps

Thanks Nihal.
What I’m referring to is a 3D planning environment (like UgCS, for example) where you can actually have better idea of the elevations involved: Google Earth Pro does that, and would like to know if its maps/tiles can be imported in Mission Planner.

Yes it can, but google earth is using a smoothed version of SRTM I believe. When I’m doing tricky flight planning I’ll actually pull up the srtm data and look at it in Global Mapper, then load up Aster V2 data as well. Both have problems, but it’s all we got. I’ve found big holes in srtm! Not a big deal, just be aware of the hole and don’t place a way point there. You also find srtm a little data being from the space shuttle : ) Aster V2 is newer. Some newer open pit mines I fly have to use Aster data and the dam doesn’t exit in srtm or google earth. In google earth the imagery is there, but not the corresponding elevation data. The other option for working in areas that have drastically change since those two data sets is to fly a photogrammetry grid high and use pix to make a geotiff of the area and load it into your mission planner folder.

What I’d like is to have the Google Earth Pro 3D maps, rather than the standard google earth 2D maps currently loaded: this is to have a more, well, realistic planning environment (see UgCS screenshot attached).
Do you think it can be done? 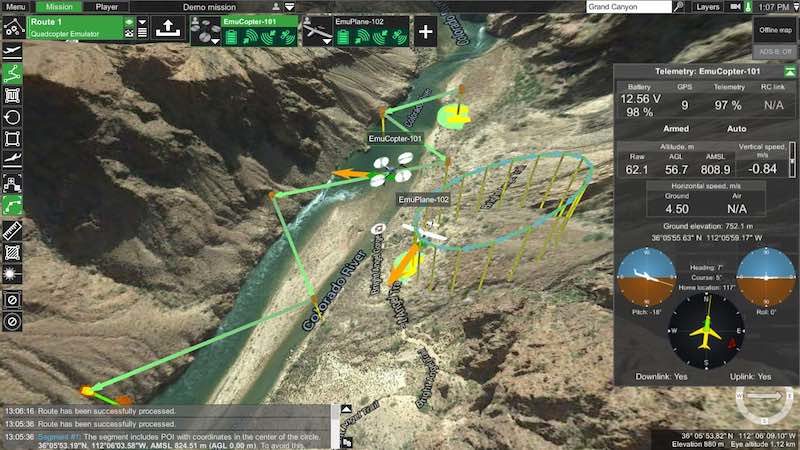 Mission Planner does so much, but it’s flight planning is 2d only. Do you like QgCS? Can it export a waypoint text file you could open in Mission Planner?

Hi X1Aero; I’m actually putting together a summary (I think it’ll be a YouTube video) of my workflow relating to survey/mission planning, and my use of and experience with various GCSs.
For my experience the UgCS route planning environment (and user interface in general) is absolutely awesome and feature rich - the Open license, which is free, already offers many great tools; the other licenses (not free) offer proportionally more tools. UgCS can connect with and supports Ardupilot/Pixhawk FCs;missions can be uploaded on to the FC, but cannot be downloaded back to UgCS; besides I don’t think it can export to a Mission Planner compatible format - however you can plan the route in UgCS, upload it on to the FC, and then download it to MP.

Hi @Gio_AC,
would you know if the 3D capabilities also allow for a vertical flight plan, e.g. to inspect a facade, a cliff side or a tower?
And if you have made a video - would you be so kind to paste a link?
Thanks!