3.4 rc5 Wondering why no problem so far

I think size of aircraft motors props all up weight etc, is important to mention otherwise good or bad has little value…
Aircraft is:

Even position hold, loiter and alt, hold are keeping perfectly the altitude (with or without wind) going forward in a mission altitude in between way-points is very far from perfect.

Adding a delay of few seconds at each way-points shows that the aircraft is regaining lost altitude from the last way-point.

Great to know. It would be nice to see a few pictures, could you share with us?
Question, why you are running the escs at 400hz? Just curious…

In response to the question: (why you are running the escs at 400hz?)

Tests I made were done (on the bench) with optos to measure rpm of props in relation to PWM values in microseconds to stable rpm. (including speed overshoot and undershoot).

I can’t say why it is much better at 400 instead of 490 Hz repeat rate (Empirical but works a treat).
What I can say is that with this particular configuration (motor / prop mentionned above) is that I never had large slipping (speed wise) or any other misbehaving.

Photo of the rig would probably scare a lot of people

Henrik,
Thanks for testing, great to hear that it’s going well. If it’s a pixhawk I wouldn’t expect 400hz to be better than 490hz, I think that internally the maximum rate that the pixhawk is capable of is 400hz so even if RC_SPEED is set to 490hz I think it will only do 400hz. I haven’t checked this but it’s my understanding.
In any case, thanks very much for testing and reporting back!

rmackay9
Interestingly I didn’t measure the repeat frequency out of the pixhawk. I just look at the number (mission planner) and set the value in my pwm <–> rpm tester.
So thank you for the information. I’ll place a scope on the Pixhawk output to “have a look”

I do realize that the little test I conducted is only valid for the ESC / Prop size mentioned. It could be very different with other setups.

So far, only strange behavior is on a mission (loosing a bit of altitude while going forward to the next way-point) and recovering lost altitude if a 3 to 5 second delay is added at each way-point.

Pixhawk is completely enclosed in a box so no propellers wind or other external on air pressure sensor can be involved. Hence I don;t know what to look for.

Any specific related parameter I should change?

We also see no issues at this time with RC5. It currently is loaded on one of our Centurion Mark III test beds and is performing well in all flight modes at the default configuration.

Since the majority of missions for this copter model are “Stand on station” We were pleased to see excellent loiter ability even before tuning.

Copter believes it is at low altitude when
powered up. (- altitude) Consistently 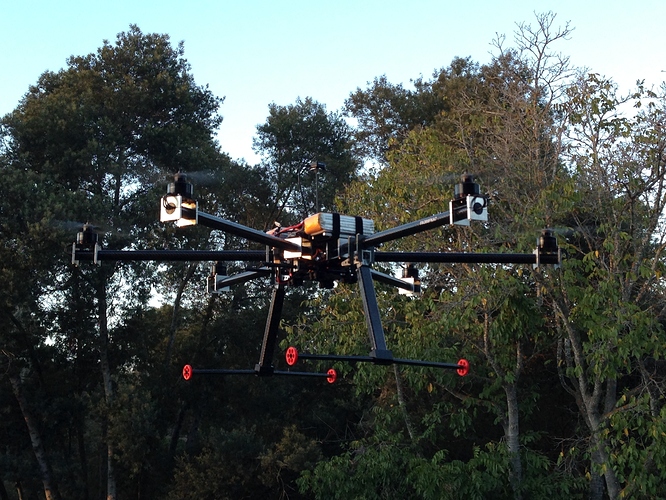 Did another mission with 3.4 rc5 with excellent results.

I see that you’re using a FrSky radio, so I would suggest that you could use this cell sensor http://www.t9hobbysport.com/frsky-flvss-lipo-voltage-sensor and alert and display cell voltage on the radio

Perhaps you could let us know (using an ohmmeter)?
Thank you in advance
Henri

I have a copter with 2 of these flvss sensors installed. I think that your suggestion is correct, that they don’t have the battery monitoring ground connected to the rx ground, but to be sure, I will check and report back. To be honest it would have to be disconnected to be able to have 2 of these things monitoring cells of 2 batteries connected in series, and I believe that this is a suggested configuration using these devices. I’ll double check in any case and let you know today.

I have tested and the LiPo monitoring pins (where you would connect your balance connector) is completely independent of the smartport ground (which connects ultimately to your rx). So no common ground as expected.

That is great.
Usually: