We have a 250mm FPV racing quad frame with pixracer FC and can not get it to hover. Quad arms and motors spin at idle without issue. If you give a little throttle quad shoots up quickly in altitude and violently oscillates back and forth in roll. It usually gets up to about 5-7 ft before I cut the throttle and it flips.

I have messed with the esc protocol, tried normal, oneshot125, all of which are supported on my escs. Tried many esc calibrations. changed the basic tuning sliders, messed with some of the roll and throttle PID’s. No luck at all. I am new to arducopter and feel I am missing something simple?

We put the pixracer FC on another frame we have and it flew fine, it was a little sluggish but it would at least fly.
Quad Flying on larger frame

We also swapped out the pixracer FC for a betaflight f4 FC and the quad flew fine.

The motors also do not respond quickly to throttle commands and when I take throttle back to idle there is a good .5sec to 1 sec delay in the motors actually slowing down. Here are a few videos depicting that behavior.
Motor Test 1
Motor Test 2

My best guess is it is compatibility issue with the esc’s and FC? or ESC firmware?

If there is anything I left out, just let me know.
Anyone got any ideas on what I am doing wrong??

250 frames work bad with standard config, I changed pitch and roll filters from 10hz to 40hz, there is a nice post that Leonards help to config racers, If I find I share for you.

I hope this is 250 Quad with Pixfalcon help

Hey, for quads that size you need to start with much smaller PIDs. Try halving the existing PID values, and then if necessary divide by 4. Sometimes the GCS won’t let you put that small numbers in, but you can override the values. The default PID values and PID thresholds(limits) are way too big for frames that size, Ardupilot was traditionally designed/used for much larger craft.

Also, you could look here for a starting point. The skyviper is approximately 250mm and is super stable.

This will give you an idea of the direction the tuning values need to go for a small quad w/ a PixRacer. It’s a 210 that performs very well. And the throttle/motor behavior you are describing sounds normal. 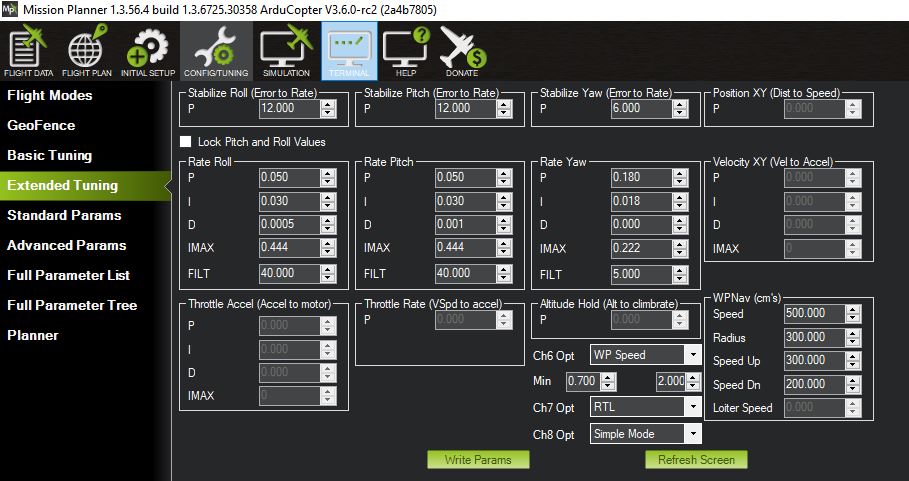