13" build can't take off in stabilize, starts to get vertically erratic when crossing mid-throttle

Its a new build, all motors and props checked, initial parameters according to wiki and PIDs well below my similar category 12" 4S build, which did not have that kind of problem. Throttle parameters set according to expected eCalc hover. Reducing PI gains further did not improve the probelm.

The problem is when trying to take off in STABILIZE the motors spool up quite smoothly when I get above mid-throttle and the copter is about to leave the ground it just starts to bounce vertically, maybe a few cm, it doesn’t really leave the ground, but its quite erratic. It doesn’t look like a Roll/Pitch issue and you can see that all 4 motors increase/decrease throttle at the same time.
I thought it could be some desync or BLHeli related problem, but the outputs of the FC already show the behavior and I can’t tell why.

On the bench without props the motors operate smoothly above mid throttle.

I also tried to raise the throttle more aggressively, but it seems basically the same every time: It bounces and can not leave he ground and after 1-2 seconds of bouncing it falls on the nose side, which is a bit strange, but it does’t do that aggressively, so i assume its not a big issue, maybe random slight inbalance/wind why it goes to that side.

(my throttle in the graph is inverted, I am using the RCMAP to have throttle and yaw on the right and i conformed on the bench that all inputs have the right influence on each of the motors)

If anybody with a bit more experience could have a look at my logs/params I would appreciate it.

The desired altitude is remaining at zero

image888×364 9.55 KB
And vibrations are going crazy, but this is probably a side-effect of bouncing on the ground without lifting off

I think the trouble might be with the rangefinder config. You’ve got it’s height above ground set to 18cm, that seems a bit high to me - I’ve got bigger frames than an S500 sitting here and I wouldnt be able to mount a downward facing rangefinder 18cm from the ground if I tried. Your’s might have long landing gear though I suppose…
Rangefinder users might be able to add more advice here.

I’d probably disable the rangefinder and do some more flight tests and tuning, then enable and test the rangefinder. You can also set TERRAIN_ENABLE,0 until things are working correctly.

You dont have a flight mode channel set, usually channel 5, and all flight modes are set to 5 = Loiter
You probably want Stabilise, AltHold and Loiter on a 3 position switch. During testing it might be handy to have a switch and channel set to kill motors, such as RC7_OPTION,31
You can even put the rangefinder on a channel too, example RC8_OPTION,10

Thank you Shawn, I really appreciate the analysis and the constructive inputs.

The physical height of the rangefinder is closer to 12cm, but 18cm is what it reads on average if I set it on different surfaces. My theory was to set ground clearance no too low, to be sure there is no issue with landing detection. But I will try without rangefinder first, since that is a type I haven’t used before

My RC runs a GCS from which I set the flight modes.

After more tests and crashes i noticed if the PIDs are too low it just flips, but too high it oscillates heavily. For this build there was no good area in between.

The problem turned out to be the S500 frame. I bought the PCB version with reinforced arms, still the whole thing is quite flexy. But I thought its a widely used frame, so I thought it must be ok. But in my case the copter is quite high powered and maybe a bit heavy (5S 9000mah). On the last flight with gains closer to Shawns a second after take-off the oscillatios broke one arm mid-air (!) close to ground and prepared for a crash.

I moved everything back to my old cf-tubed x-frame and basically the same setup and config took right off and flew nicely.

So what I learned is that stiffnes is really important and any flex amplifies oscillations dangerously.

Still not sure why the S500 frame seems to be so widely used, probably only ok for 3s 5000mah + small 22XX motor builds.

Seems like you may benefit from this frame: https://shop.holybro.com/x500-frame-kit_p1178.html

Basically its a fully carbon fiber version of an S500 frame. Arms are standard 16mm size and can be extended very easily.

That’s what I used for my build, but extending the arms with his motor and prop sizes I’m not sure it will be rigid enough.

I built the X500 kit with the included motors, props, and escs… It’s pretty solid in that configuration. I have not even balanced the motors and props yet and my vibration levels are very low (Holybro Pixhawk 4 mounted with included 3M foam pads.)

That frame is just ugly. I’d pay a little more and get a Tarot 650 Sport

I have one. Its a solid frame with excellent quality CF plates, integrated PDB for the battery input and ESC power, and it comes with retracts.

If you want to extend it, get arms 4 arms for a Tarot 680 Pro Hex, and some aluminum motor mounts, and you can use props up to 17".

For motors I used 5008-335KV motors controlled by HobbyWing X-Rotor 40A OPTO ESCs on 6S power. CAVEAT: I tried some of the cheaper 5010 motors and these 5008s are much more efficient 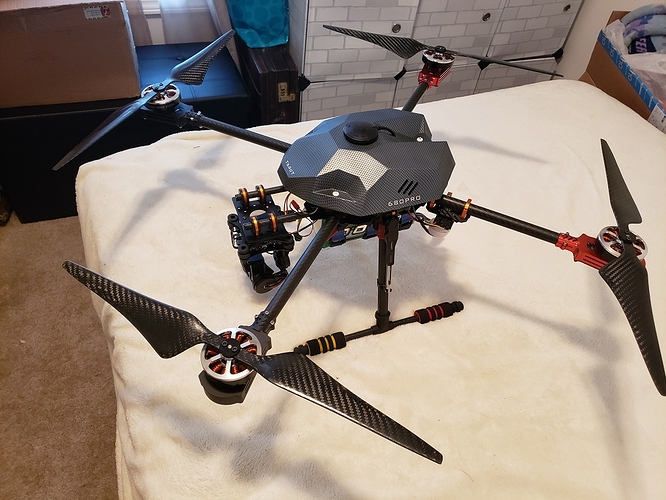 LOL… Not sure I want to see your idea of a good looking woman then!