I design an X6 drone with a take-off weight of 12 kg. Below are four different engine models that I am considering. I took the MN501-S motor as my reference. The others are heavier so I exceed the weight of 12 kg, you can see it on the screenshots from eCalc. Which engine class do you think is the most appropriate for that drone? 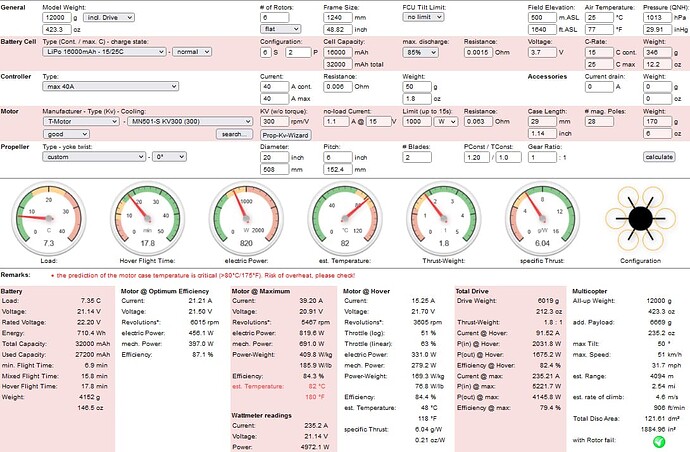 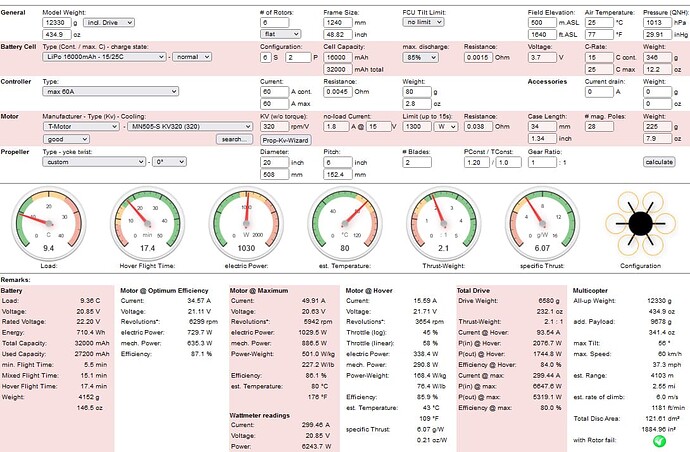 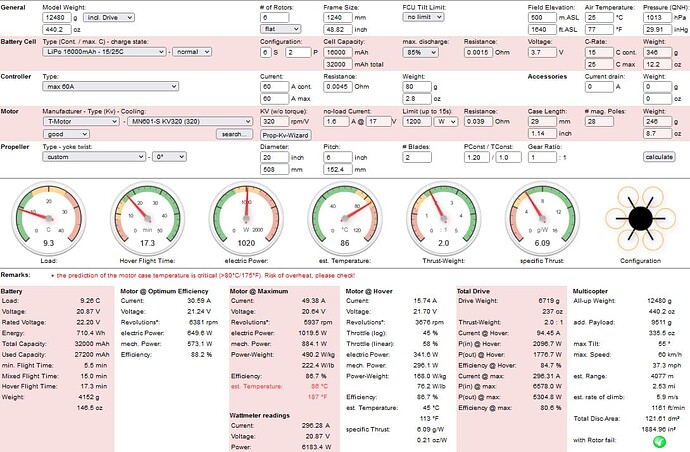 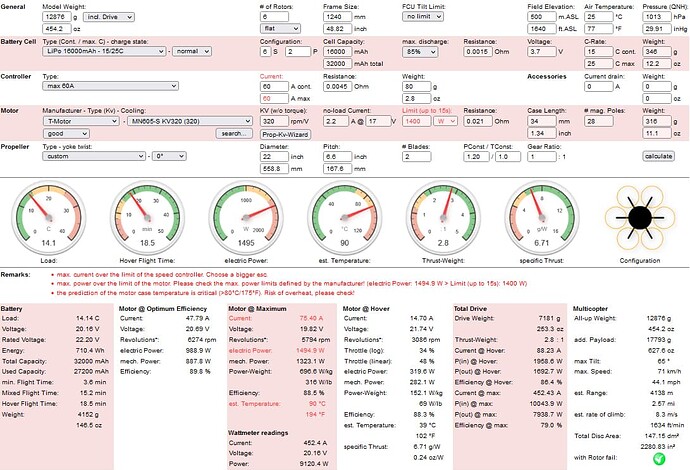 Just a brief look over that shows the 320kv/20inch seems better.
Be aware that the T-Motor tables that show data for their motors with certain props are NOT necessarily recommendations to use those props (although they might be, no one is saying either way)
Some motors work better by going down a prop size and spinning a bit faster - better attitude control!
Consider the 18inch props.

What are your overall design goals here?

I assume you have some sort of regulatory limit at 12kg?

How “designed” is the rest of your aircraft? Typically motor selection would be my first step after establishing requirements then design around them.

I plan to build a drone that will carry a Gremsy T3V3 gimbal with a maximum payload of 1700g. I would like to use it mainly for photogrammetry and filming. I will have precise GPS on board.

From my general calculations it is that the individual parts of the drone will weigh:

Below is a view of the 3D model that I designed and cut it from carbon plates: 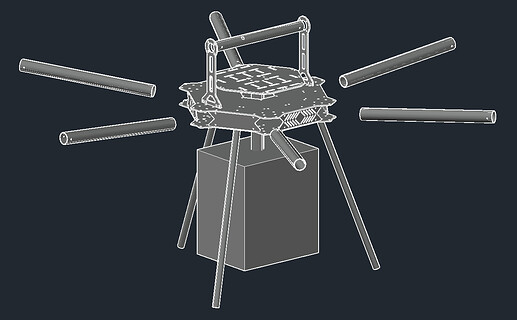 I do not have any regulatory limit of up to 12 kg, this is the weight that comes out more or less from the calculation of the weight of individual drone elements.
If my propulsion system has a power reserve, it will be an advantage with various hardware modifications and during engine failure during flight.

If that is the case I recommend you consider going with the hobbywing x6 pro platform: These are very affordable and extremely reliable (tons of agriculture and industrial drones use them). It’s very nice not to have to find a place to mount the ESC and it looks much more professional.

You could easily get away with a quad motor config with your payload but not a big deal if you already built the bex frame.

We have a fleet of Hex’s we built using these and get 1 hour flight time with no payload (2 30Ah 6s in series).

With whatever motor you go with I highly recommend you switch to a 12S configuration, it will get you better performance for the weight in motors and wiring.

I wish it was a 6s powered drone, I purchased MN501-S motors a while ago and am considering replacing them with a bigger one as I used to think I would fit into 10kg MTOM. 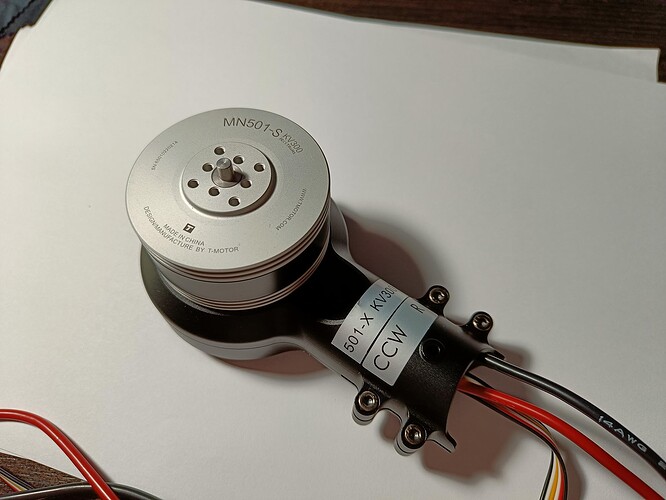 5kg is a lot for frame and electronics. I have a 18” propeller Hexacopter capable of 2.5kg payload and the frame + electronics weight is <2kg.

Flight time is 27.5 minutes w/ 20% battery reserve. T:W at low battery would be around 2.4:1 (should be enough to handle prop/motor/esc loss as well).

But ok sounds good - I missed the gimbal so its 2750g of payload.

Are you baking in actual battery redundancy or just throwing on two packs and calling it a day. If a battery fails and you simply just have both in parallel - there is no redundancy there. The second battery will quickly destroy itself and the aircraft will come down.

The photo below shows the weight of the individual components: 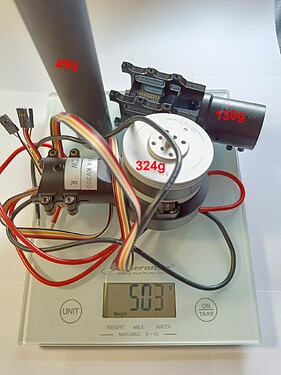 I did not know that with battery redundancy, when one battery fails, every drone falls from the sky, useful information. I think that with two 16000mAh Tattu I get the optimal flight time. The problem is the motors MN501-S are too small for the 12kg drone configuration with thrust reserve due to single motor failure in the sky. When the single motor fails hexa turns into a quad.

I asked you as specialists at the beginning which motor selection would be appropriate among the ones I have given.

I would definitely go up a size in motors, the biggest I would go to is the hobbywing x6 I suggested (750g each fyi) but those may make you want to size up the battery a bit for optimal flight time.

I like to have a hover throttle well below 25%, you will also be operating in a more efficient regime of any given motor / prop combo at lower rpm.

Couldn’t pull up the specs on those other motors on mobile but they might be a good middle ground (although they almost certainly cost a lot more than the hobbywing).

Thanks for the additional info. I was a bit confused because you are including the arm/folding mount length in propulsion - when I would include it in aircraft. Regardless, the end weight does not change.

I think your approximation for airframe with electronics at 2000g is a bit high (since you are not including the arms and folding mounts in that number). I would expect all other components to be around 1000g since its just center plates, landing gear, electronics, fixtures, etc.

Regardless - I will help you choose a propulsion system for your approx takeoff weight of roughly 12kg. If the aircraft can be lighter - you will just have more flight time

The MN605-S series would also work. You would have more thrust overhead - but lose some flight efficiency.

At 11KG - that propulsion system would lead to the following specs: 27.5min fight time (w/ 20% reserve) and T:W of 2.35:1. It would be a more efficient and maneuverable aircraft - but would require you to shave some weight. It should be possible. You should be able to save some weight on the airframe.

Maybe look into 25mm CF Tubes for the arms? Would save weight on both the folding mount end and the tube end. The load on the arms is pretty manageable for 25mm tubes. Or like I said - an X8 if you want full redundancy.

What calculator do you use? eCalc shows the motors are overheating: 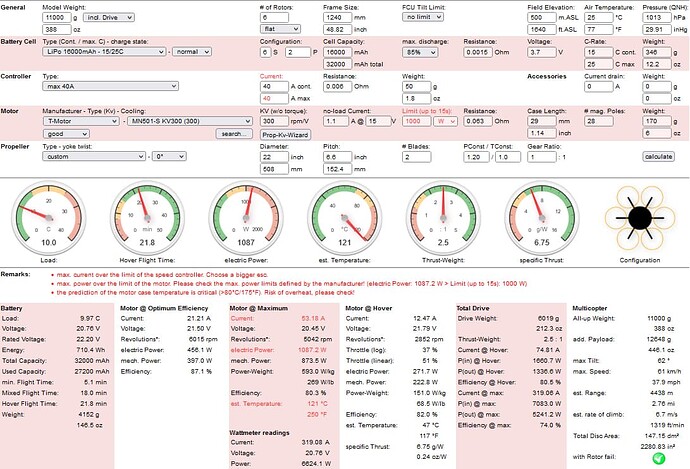 I am using the performance table directly from T-Motor website. One of their recommended pairings is the 22” propeller - so the motor should be able to take that prop.

I think you should select excellent cooling on eCalc to make the outcome there a bit better.