Thanks. I will take a look at those. The Actuonix ones
(https://www.robotshop.com/en/p16-linear-actuator-50mm-2561-12v-potentiometer-feedback.html) I am using have a perfect stroke length for my Bad Boy mower but max speed is 4.8 mm/sec. They have 250 Newtons of force at 2.5 mm/sec, which is about 56 lbs. They have one that is 4 times faster but 4 times weaker. At $90 a pop, I’m hesitant to try them.

My actuator setup is attached. You can see the disconnected damper beside the actuator. They were pretty easy to install but they are slow to operate. 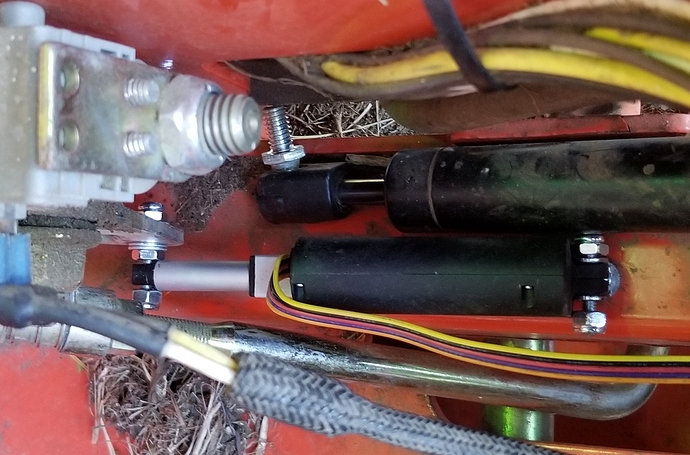 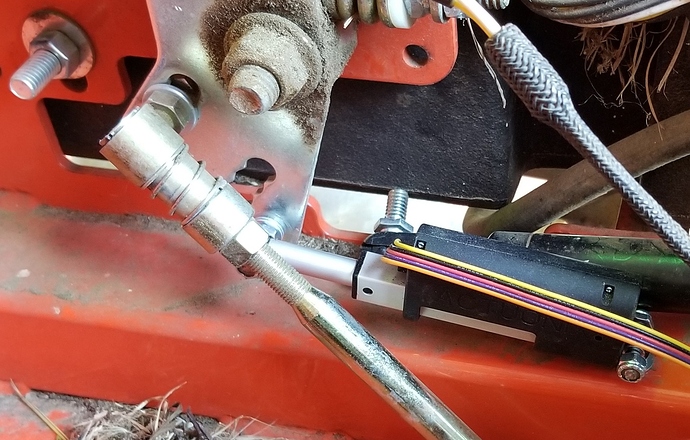 Kevin, with the Hitec programmer you can adjust the speed of the servo. You may be able to squeeze a bit more throw out of it by changing your servo endpoints in APM (SERVOx_MIN / MAX) - by default they are 1100-1900, and from the Hitec’s I played with, they responded all the way from 900-2100.

Mroberts, I have set the throw as you have mentioned in Apm and I can confirm it works from 900 to 2100 as well. I think slowing down the speed would be a great option. I might have to look into that.

@mroberts, thanks for the input. I will probably keep the linear actuators until they fail and then switch to something else. Interestingly, I have a difficult time driving in manual, but I have somewhat gotten the hang of it, but I have tuned the Auto PID loop pretty well. I am amazed at how well it is controlling giving the really bad lag in the controls. In the screen shot attached, I did not have pivot turns enabled, because I only wanted to tune the main steering. So, ignore the overshoot at the turns. The width of the yellow line is about 2 feet so I think the rover is only varying about 6 inches. I was doing this in the dark, as that is about the only time I have had to work on the project lately, so I didn’t get any video of the actual mower. I hope soon to be able to work on it in the day! Still more tuning to do, but promising I think. 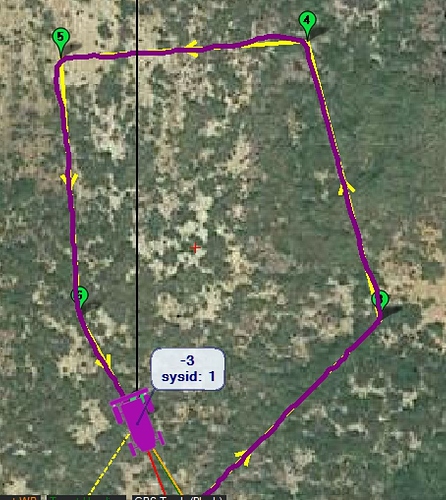 For a good while now, I have had trouble with “Mode Change Failed” when trying to switch to Auto with Ardupilot armed. I have to disarm, switch to Auto and then rearm. I need to figure out this problem. I also have “Bad AHRS” a lot. I have compasses disabled because I had the same trouble Kevin has had getting them to work. I assume it is my mower’s large metal chassis and/or the engine spinning. Once I get into Auto, I have had good success with tracking as you see from my previous post. But it is frustrating getting this message.

Today I upgraded to ArduRover V3.4.1-rc1 and now when I switch to Auto and then arm, the robot takes off fast and basically out of control. I read the comments here Rover-3.4.0-rc1 released for beta testing! and assume this is sort of what is going on. Anyway, the main thing is I need to figure out why I am having the “Mode Change Failed”. I am uploading a log from today. Any help is greatly appreciated!

Thanks for the report and logs.

The “Bad AHRS” message comes from the EKF not having a good position estimate and this normally happens when the GPS data is not good and waiting fixes the problem. It could also be caused by the compasses being turned off though.

So a few things from looking at the logs:

I was thinking…
Depending on whether you can determine the major source of your compass errors (chassis versus the motor), if it is the motor that’s really causing your problem, then you could have the Compasses on for start-up, calibration, and then once you have a good EKF and GPS fix and are ready to start, turn off the compass? As long as you keep moving the EKF can get heading from the GPS (though it is no where near as accurate since GPS only updates at 1HZ)

Ardupilot code needs a GPS update rate of at least 5Hz. Anything bellow that will cause strange error messages and/or erratic behavior. @lordneeko please do not use 1Hz GPS devices.

I have had great success with the Firgelli Actuators

@rmackay9 Thank you for the detailed and very informative reply. I have a GPS with compass I am not using. I just started to connect it and see that a wire is broken. I only have about 30 minutes to run right now, so I won’t try to fix it. I did try powering up with the unit facing north and that did make the heading correct. I am running right now very nicely between waypoints in auto. I will report back when I get compass working.

On the number of satellites: I usually see 12-15. I am not sure why it dropped lower except at the very end which would have been when I drove it inside my metal shop just before turning it off. I just had a good run of about 30 minutes. I saw 14 and 15 satellites when I noticed. I will examine those logs later. I shot a video (in the daylight for a change) of the mower and will get it posted as well. I thought I have my RTK worked out, but I see that I am still having trouble there. That’s a whole different story for another time. Thanks so much for all the help!

OK, so we’ve got the GPS performance issue solved and we can rule that out. txs for that.

It’s becoming pretty clear that we need to come up with an alternative to the compass for stabilizing the heading. We’ve done some work to use forward facing optical flow (on multicopters). We never completed that work but I think we should revive that and try it with Rovers. That’s a chunk of work though that is backed up behind some other EKF work to do with external vision system support (VICON, etc)… so I think we’re going to have to find alternative solutions for a couple of months at least.

Looking forward to the video!

I bought a couple of different I2C compass breakout boards but have not had time to wire them up. I also have the one compass/GPS module that I will fix and try again. The PixHawk is setting right above the roll bar of the mower so I figure that is interfering greatly with the magnetic sensor. I have a proper enclosure coming in for my electronics and plan to move it away from metal as much as I can. I also bought a second PixHawk and think I will wave it all around with the mower running and see where it seems to work best. I can also plug one of the better compass modules into it to see how they work in various locations. I may try a longer I2C line, but I’m sure at 3.3V I2C can’t work too far.

So, how do you determine what an individual compass is reading in Mission Planner? The AHRS heading, being a blend from the EKS doesn’t work, of course.

Video coming up in a few minutes.

So on the mission planner’s Flight Data screen, there’s a status tab near the bottom left. a huge bank of labels and numbers is shown, the mx, my, mz shows the individual values for the first compass, also the “magfield” shows the length of the vector made up of those three value.

there are similar fields for the 2nd (mx2, my2, my2, magfield2) and 3rd compass (mx3, my3, myz3, magfield3). It’s also possible to see these numbers more easily from the Quick screen by clicking on any of the existing numbers in the Quick screen and then selecting the appropriate checkbox on the window that pops up.

The magfield values in particular are useful for seeing how bad the compass interference is in real time. So you can move the compass closer/further from the body of the vehicle and see at what point is stabilizes. Ideally we should aim to place the compass somewhere that it’s magfield doesn’t change by more the 30% from it’s “natural” lenght. I.e. take it 10 feet from the vehicle and it’ll probably give a lenght of something like 450… move closer and closer but once it’s length is over 600 then it’s too close. These numbers are just guesses and examples and the length can be different depending upon the compass hardware itself, the environment in which it was calibrated and your location on Earth. Anyway, hopefully that gives some ideas about how to determine a good place to mount the compass.

By the way, ArduPilot only ever uses one compass at a time and by default it’ll use the first compass (which is normally an external compass). We can add support for blending compasses, it’s not particularly hard we just haven’t done it yet.

Thanks, Randy. I had seen the mx, my and mz fields (and the 2 and 3 versions) and pretty much understood them but thought maybe there was a single value of azimuth degrees. I did not know about magfield. I will get more familiar with all that when I get a working external compass hooked up.

In case it is of interest the log file for that run and another lap or two and then manual driving back into the shop is https://www.dropbox.com/s/rc3p36o4d0nql38/00000024.zip?dl=0, I’m always open to advice, comments, etc!