Rover-4.3.0-beta4 has been released for beta testing and can be installed using MP or QGC’s beta firmwares link or it can be downloaded directly from firmware.ardupilot.org.

The changes vs -beta3 are in the release-notes and copied below.

Unlike Copter, this probably won’t be the final beta release but any and all testing and feedback is greatly appreciated.

Confirm harmonic notch implementation has not yet been backported to Rover 4.3?

That’s right, it hasn’t been backported to 4.3.

Thanks, Randy. I didn’t figure you were that quick!

For the benefit of those following the topic and release cycles, the HNTCH* parameters have been made available to the user in Rover for quite some time now, however, harmonic notch filtering is not yet implemented in Rover firmware, which could be a source of confusion.

I submitted a PR to 4.4-dev for that implementation which has been merged, and it appears that it may make it into the official 4.3 release as well (TBD).

I expect that most Rovers, particularly electric ones, will not benefit from such filtering, but some combustion engined Rovers may gain a minor advantage by enabling some degree of notch filtering.

testing and feedback is greatly appreciated

I am trying this version ArduRover 4.3beta4 on a balance bot with conventional sensored low KV brushless motors, with wheels directly driven (no pinions/gearboxes). I have looked (for the first time) logs of THR Speed/DesSpeed and I observe a huge 10x discrepancy: 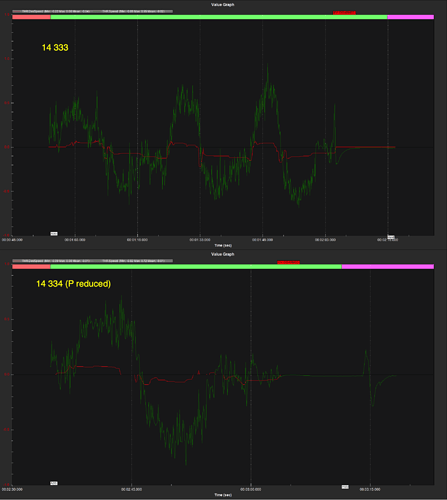 The real behavior may be around 1m/s (3s each straight), so close to THR Speed.

Examining past logs, discrepancy is much lower. This is the same, corresponding to this video:

BTW, I continue observing tilt vibration no matter what I try: 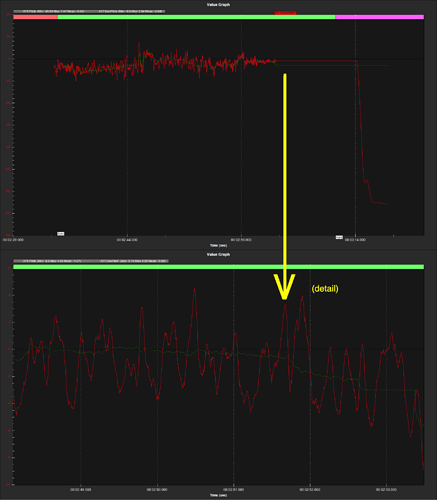 although in this case there are no teeth suffering it (wheels directly driven).

Re the bad speed control performance (aka, “THR Speed/DesSpeed* and I observe a huge 10x discrepancy”), the biggest contributor to this will be the CRUISE_THROTTLE and CRUISE_SPEED value which is used for the feed forward component OR maybe it is the balance bot tilt PID controller params.

Also if you’re using wheel encoders, I think the big change in 4.3 is that the WRC_ gains must be greatly reduced.

If you have a log I can look at I might be able to give better advice.

Yes, I corrected it a bit and it went better: 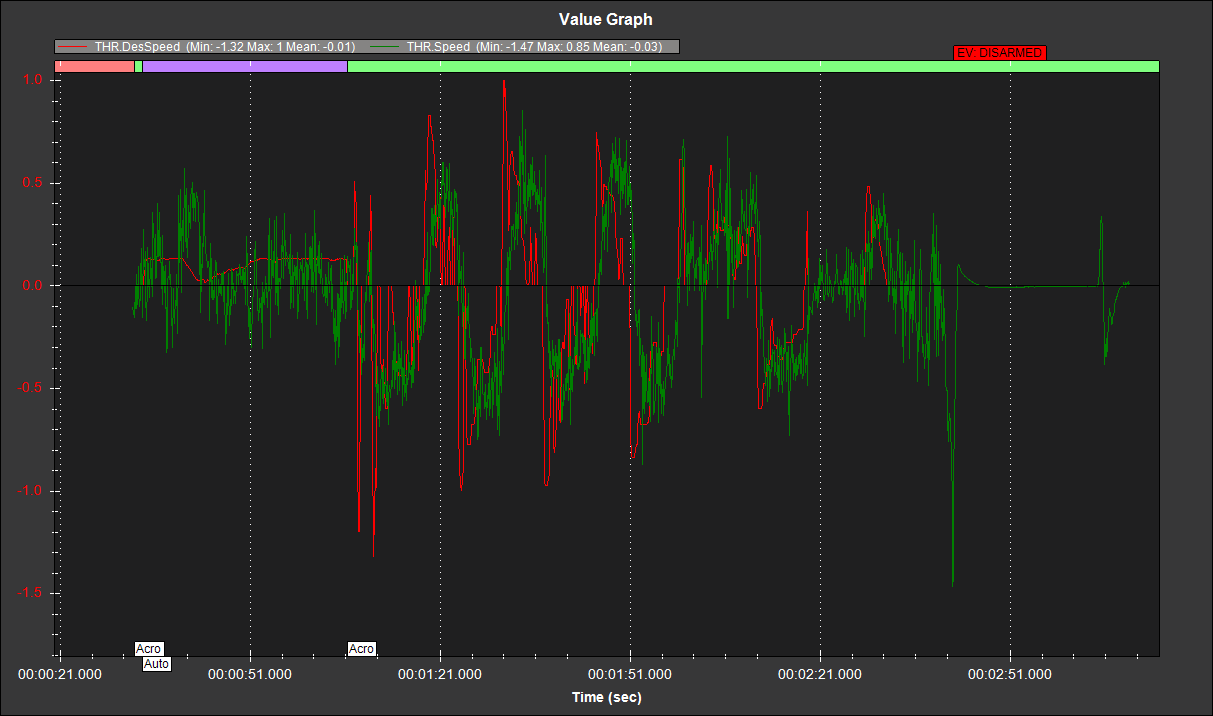 20221101_Barbie14_367_THR-DesSpeed-Speed1213×716 14.3 KB
As indicated here I cannot assign a switch to “Learn Cruise Speed”, since I use car three channels radios on Rovers, so I look at the logs (till some day copying one of these radios parameters to a radio with more channels).

Certainly several are out of range, as you can extract from the .BIN below, but that was the best I could get with this motors and ESC’s (direct drive to wheels without gears).

I will appreciate it. Here it is (.BIN and .tlog), and this is the video of it: 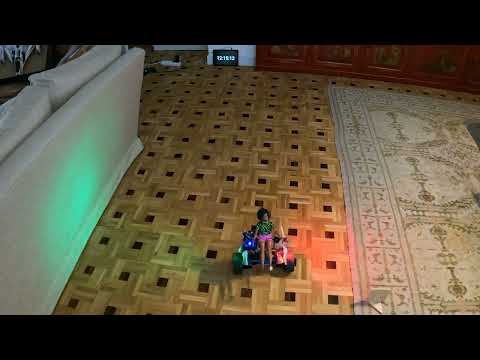 It consists of a mission trial (unsuccessful), some straights and some turns. Finally it falls without apparent reason.

The mission (Auto at the beginning, also some straights, indoor with wheel encoders) fails without apparent reason: 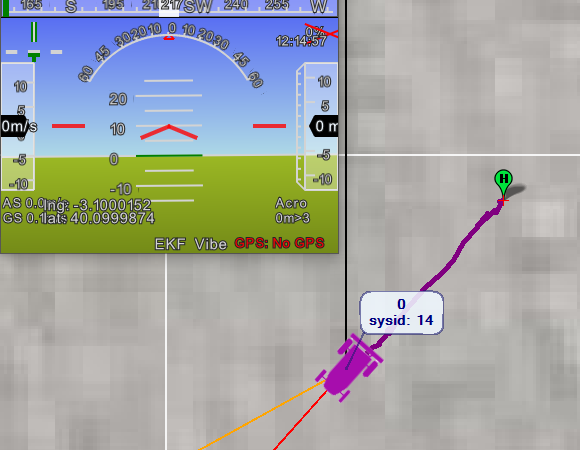 so mode is changed to Acro for the straights and turns.

Note that the motors are low KV sensored brushless, with the sensors connected to both the ESC’s and the Pixhawk1 as encoder signals. The result seems reasonable: 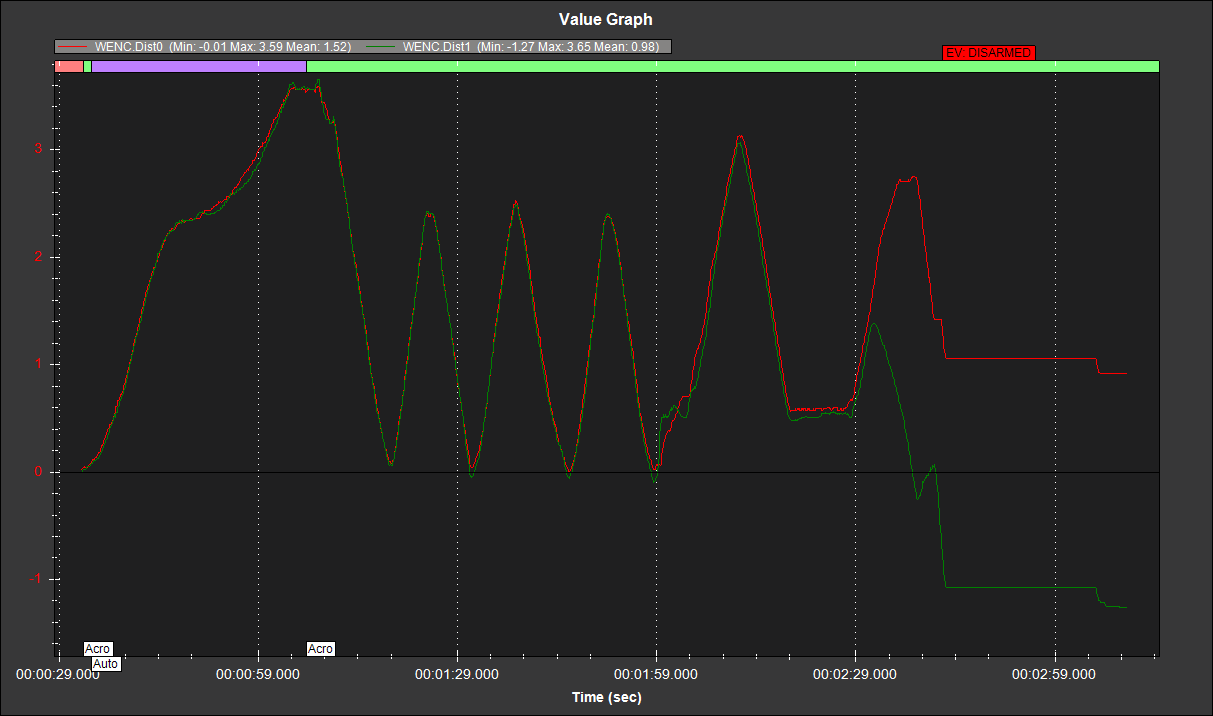 The first problem to solve is that pitch oscillations are everywhere, as seen in the .BIN and on the video. THR Thrin/ThrOut: 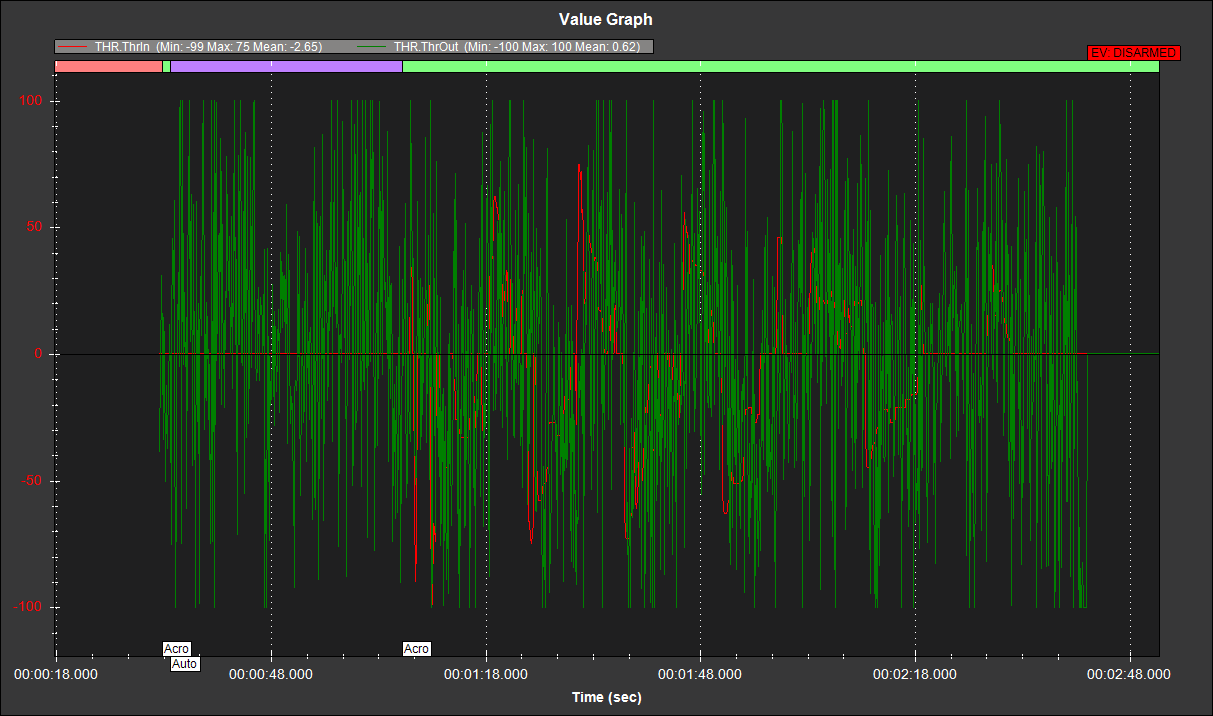 This is the instant it falls, after the turns. I can’t see the reason: 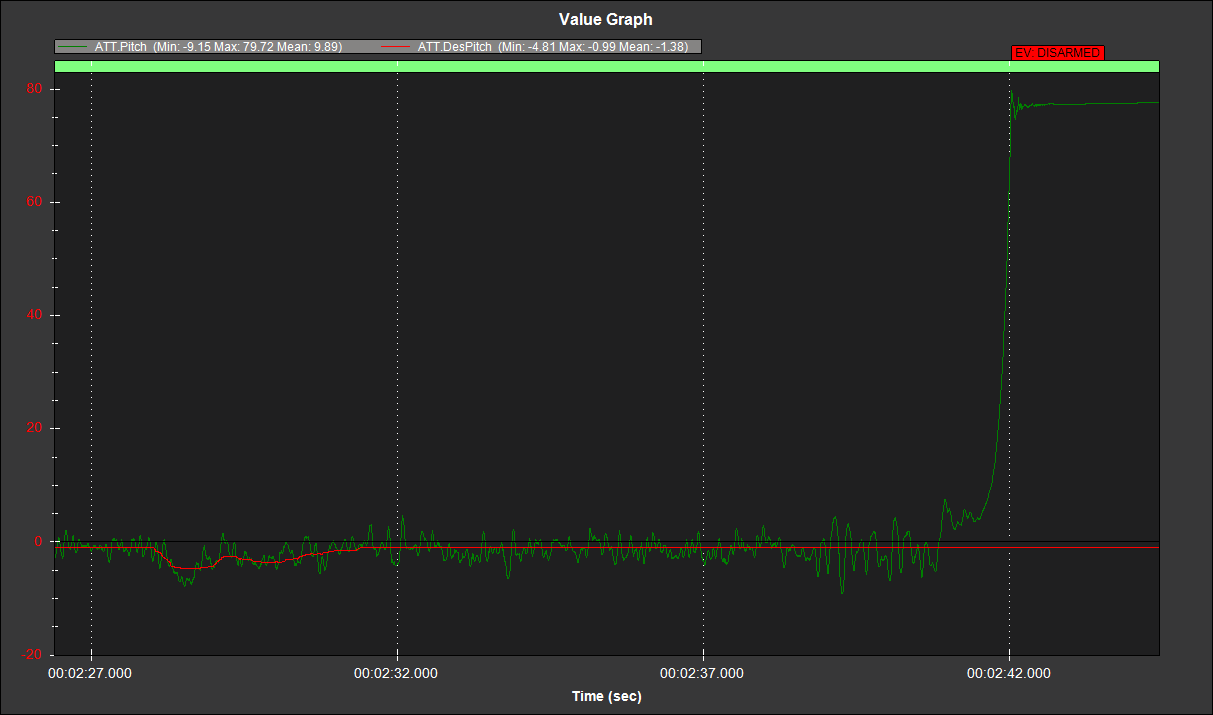 Txs again for the details.

This wheel encoder related issue is actually a blocker for the Rover-4.3.0 release so I would like to try and separate differences seen between 4.2 and 4.3 VS tuning required for a new vehicle. To do that I wonder if you could try Rover-4.2 and Rover-4.3 again with one of your vehicles and see if there is any difference? Ideally it would be good to test with your best performing vehicle… or the vehicle that you knew was running OK with 4.2.

Re tuning this new vehicle, I think it might help to set ATC_BAL_SPD_FF to zero. I actually think we should completely remove this parameter because it is a feed-forward using the current speed as an input. This seems extremely strange to me.

I have never written a good balance bot tuning guide but I think it should be done in this order:

For step3 we can see the D term is providing most of the output of the PID controller and it is often hitting the limits (-1 to +1) so I think the ATC_BAL_D-term is too high. 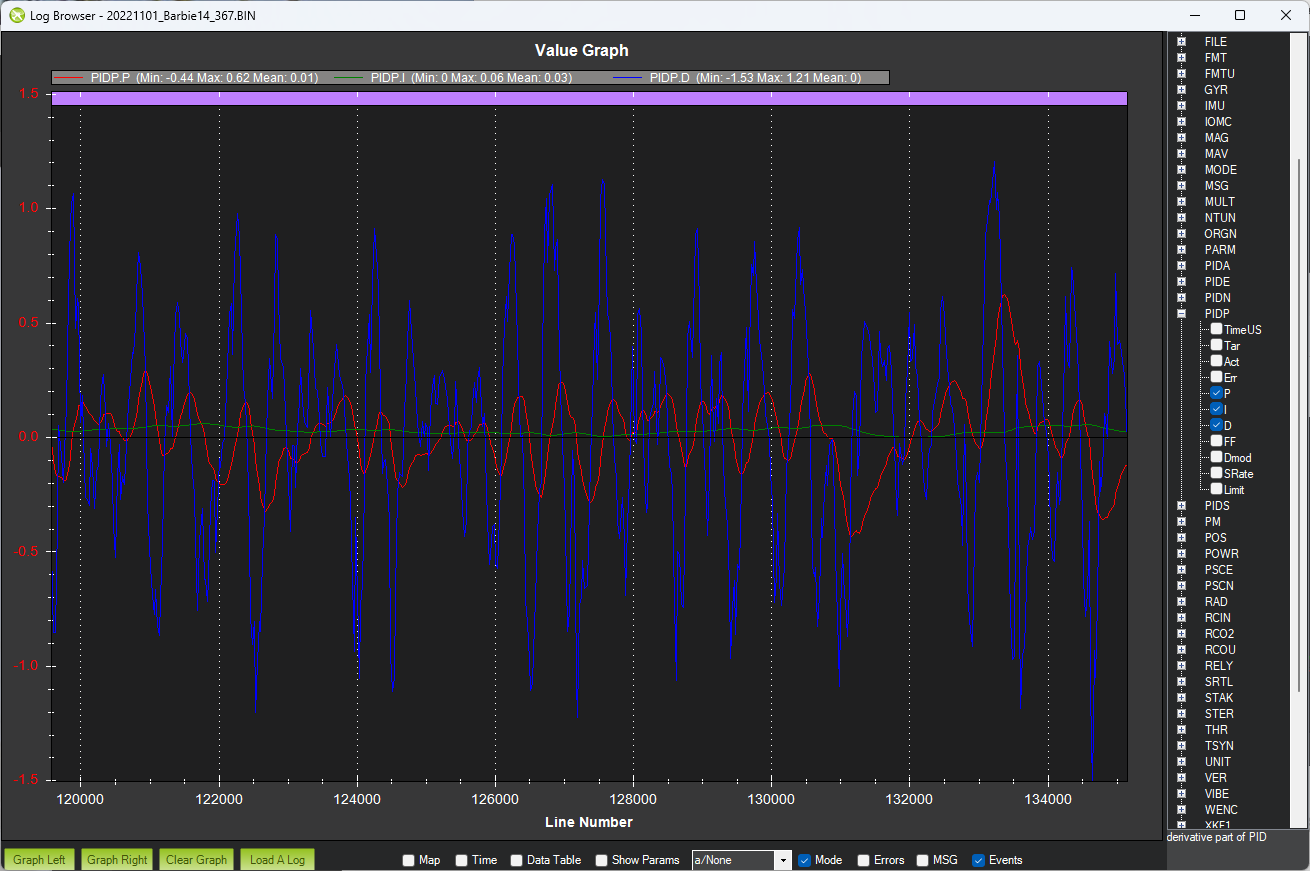 Thanks for the answer. I will test all you say in the following days, but what I experienced on v4.2->v4.3 is that, maintaining parameters (wheel rate controllers disabled), I needed in all balance bots to increase heavily ATC_BAL_D (up to 0.5); if not it began oscillating back and forth on the same place, even disarming by itself (CRASH_ANGLE=45). That stopped oscillations, but a vibration remained (motors pinions teeth knocked).

Later I could get acceptable tunings, always with high ATC_BAL_D, with warnings when writing them, but never on the one with these conventional low Kv sensored brushless motors, with direct drive (no gearing) to the wheels. They have a very high torque (the balance bot can climb ramps).

Also, I don’t know the code, but specially I cannot understand how could happen with the x1000 error on the encoder signals v4.2 interrupt handler (which can be optimized in execution time) that tuning resulted better and with less effort than in v4.3 with the error corrected.

I’ve created a PR with some balance bot tuning advice improvements. I suspect this will be merged to the wiki in the next 24hrs.

I’m not sure how you’re tuning the Pitch controller but in any case, this should be done in Manual mode and ideally using real-time display of the PID controller’s inputs and outputs (e.g. “piddesired” and “pidachieved”).

Sadly my balance bot has some hardware problems but I will resolve these issues over the next few days and test some of my advice myself.

I’m continuing my investigation of BalanceBots and I’ve got some enhancements to the pitch controller which moves the ATC_BAL_SPD_FF (feedforward using speed) to ATC_BAL_PIT_FF (feedforward using vehicle’s current lean angle). In my testing this improves the pitch control and allows reducing the ATC_BAL_ gains to reduce the bobbing. Feel free to give this a try if you have time.

Feel free to give this a try if you have time.

Thanks, I’ll certainly try it (compilation shows it occupies 5K more than version I tried on 20221027, so it contains many changes). In the mean time, I think I have:

Question: if in your branch you are moving to μs, why still in WheelEncoder_Quadrature.cpp:
irq_state.last_reading_ms = timestamp * 1e-3f;?

I am testing now with WRC_ENABLE=0.

Txs. This branch is just looking at the control, not the estimation. I think it’s sometimes best not to mix two changes together because it adds confusion as to which change is causing the improvement.

By the way, if you are seeing wobbles in Manual mode and WRC is disabled then the wheel encoder change should not be related.

I always use Acro (or Auto), since in Manual I find that balance bots turn too fast only with a small movement of the radio steering stick (or wheel in pistol radios). How can I control steering rate?

ATC_STR_RAT_MAX/ATC_STR_ACC_MAX don’t seem to have any effect in Manual.

(BTW, I use car radios with balance bots, with two 2-positions switches (Acro/Manual/Auto/Hold)).

One could use a transmitter mix to limit the responsiveness just like “dual rates” in RC aircraft control.

I’ve created a PR that adds add a MANUAL_STR_EXPO which I hope will help resolve the issue with using manual mode. Maybe you could give it a try to see if it helps? If it doesn’t then we can add a MANUAL_STR_SCALE (or similar) param to linearly reduce the manual steering response.

I’ve also updated the other PR to add pitch limit protection to stop the vehicle from falling over in all modes.

Maybe you could give it a try to see if it helps?

I have downloaded seeing this

I don’t see any parameter named MANUAL_STR_EXPO to adjust. From Parameters.cpp/.h above it seems to me some declarations, but no code, although I don’t know the code, and I am not too familiar with git.

Steer handling in Manual continues more difficult than in Acro, but I didn’t try Manual before too much.

What am I missing? (May be I didn’t download the correct branch)
Should I find MANUAL_STR_EXPO in MP → CONFIG → Full Parameter Tree?

I found the changes and did them manually.

Yes, with 0.9 it is very easy to drive in Manual, at least with one balance bot.