Hi, My name is Farih,
I just curious about failsafe that set the position of servo if the RC transmitter loss. I just set to

and i just test and see in the Mission Planner. It works that RC Transmitter give those all input but the output is just stay holding the last position… Is there anything that i miss about? thanks… 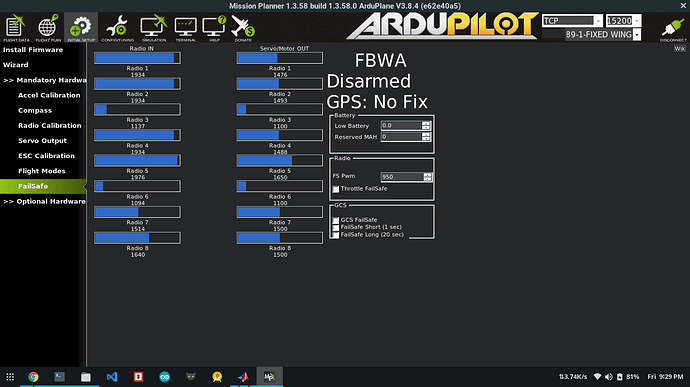 You need to check the box “Throttle Failsafe” to enable the feature. The receiver must be set up to have a low PWM signal when the signal is lost. This will activate Loiter mode first and then RTL after a longer time period.

You can read more about Plane Failsafe here.

sorry @GregCovey , i don’t want to use Loiter and RTL, i want to set all the position as i explained above if it loss control… (pass the PWM to output)

Setting the position of the servos on loss of R/C signal is usually done by the receiver failsafe modes, not the flight controller.

If you do not use a flight controller, then the receiver can usually be set to a simple failsafe mode that fixes the servo positions for a minimal crash damage landing.

If you use a flight controller, it tries to save the plane, first by going into Loiter mode in case it quickly recovers the radio signal, and second (for a longer failsafe period) by returning to home which brings the plane back closer to the transmitter signal.

In other words, for your desired failsafe operation, disable APM failsafes and set the servo position failsafe on your receiver.

Yes, i just set the receiver F/S and disable the Pixhawk F/S but when i turn off my transmitter you could see the image in post (input is all right position and throttle down but the output is holding last position)

Ok, I see now. What happens when you change to Manual Mode? Does the output follow the input when the transmitter is turned off in Manual Mode?

I see there was a failsafe fix for rudder in Plane v2.9. It is similar to what you are seeing on all control surfaces.

fixed a bug where RC failsafe could lead rudder input stuck at the last rudder input value in some modes. Thanks to Michael du Breuil for the fix

The feature supports safety rules imposed at the bi-annual Outback Challenge in Austrailia. The rules says if the aircraft experiences problems with either RC, GPS, GCS, telemetry, geofence breach, barometer failure, etc., that it has to be ditched instead of using RTL.

@flyingw : Thanks, this option is the successful one…
@GregCovey : Thanks also for your fast and kind responses…