Follow up work from this post , we decided to go for another flight to get a better tuned pitch controller, rectify airspeed sensor problems and collect more flight data before we push for TECS tuning.

We had 1 successful flight before this. Good thing is we have logs from 2 flights: 1 that flew ok. 1 that ended in a painful crash.

For this flight, we took off and had reasonable QLOITER performance. I then switched mode from QLOITER to AUTOTUNE @ 20 meters. We saw a good transition. However, just when transition is declared done, the aircraft, with plenty of airspeed, decided to take a nose dive over a period of ~1.5 to 2 seconds.

We have been studying the logs over the past 2 days and have not been able to identify what is happening.

Key timings of this Flight

A few hypotheses that we have been thinking about:

Can we request some help from this community in evaluating the logs along with us (i.e. new ideas or hypothesis) We are still looking at the data ourselves but it is getting to a point where we’re running out of ideas.

Products for this failed flight are as follows

You could verify in the logs if the front motors are having to throttle up more than the rear motors as the airspeed increases.

I don’t think any of the other your hypotheses would cause such a dramatic crash.

If you have it working nice in Qmodes you should look at setting up Qassist, if correctly setup the Quad motors will come on if too large a angle error is detected, This may have been able to catch it in the nose dive.

I’ll vouch for q_assist. it can be a huge help and has saved our aircraft or greatly lessened the damage many times.

When in AUTO modes (MC or Plane)I also always keep my throttle up at 50% and Qloiter as one of my available flight modes so I can switch back at a moments notice. This has also saved us many times, and can allow you to detransition your aircraft back into MC mode at anytime in case something funky happens in AUTO plane flight.

Thank you Peter for the idea.

On our system, SERVO5 and SERVO7 are the Front right and Front Left quad motors respectively.

Looking at the RCOU.C5 and RCOU.C7 of both 1st flight (good flight) and 2nd flight (crash flight), it doesn’t looking very much different. 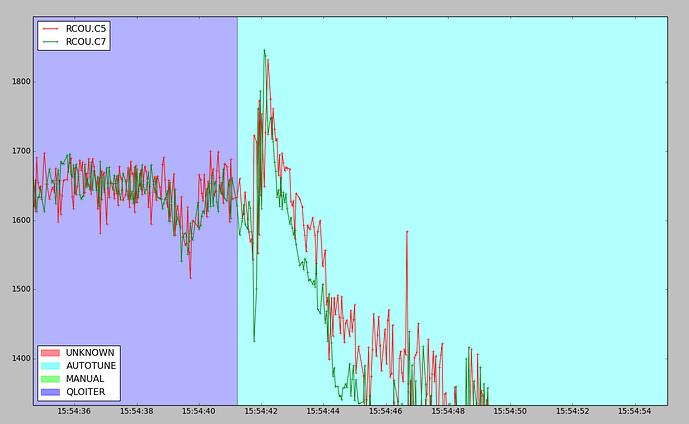 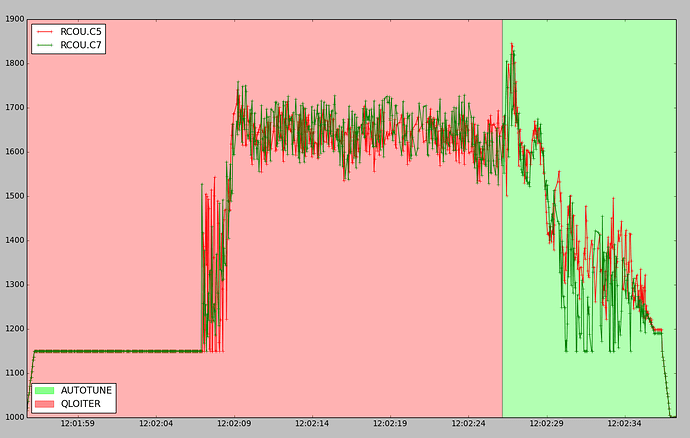 hi TC,
I had a look at both your older log (03_Nemo1stAutotuneFlight.BIN) and the new one (00000003.BIN). I can’t find any reason for the crash with the new flight. The elevator output looks right, the servo direction settings are the same, the sensors look consistent. There is significant vibration, but I can’t see any way that the vibration could have caused this failure.
So it looks like a hardware failure, for example a failed servo linkage for the elevator. If Q_ASSIST_SPEED had been enabled then it would have had a reasonable chance of saving the aircraft, although I know that isn’t much consolation now.
Going through your analysis:

Vibrations from the DLE61 gas engine got to the Cube’s pitch estimation, causing the dive

this definitely was not the cause, as the 3 attitude estimators (2 EKFs and 1 DCM) all agree.

GPS came loose and fell off right after transition is done

there is no evidence of that in the sensor logs, and even if it happened it wouldn’t cause this.

this type of failure seems the most likely given the log. Could a servo cable have come loose? Are the servos powered from the servo rail of the flight controller? I notice the servo rail is measuring 7 volts. I presume that is deliberate? I don’t see any change in servo voltage associated with the failure, so no smoking gun, but looking at power and cabling for the servos is an obvious candidate.

The raw servo output logs show it wasn’t an auto-trim issue. The trim on the elevator is the same in this flight as your earlier successful flight.

Thank you for spending time looking at our logs. It does help to confirm some hunches that we have about what went wrong.

47 Hz featured quite prominently in the FFT. It was close to the idle RPM that we had that day. The system was probably exposed to it for 20 seconds while still on the ground.

We’re hoping we can replicate the servo failure by running engine tests on the ground.

Well, at least now we know how a hardware failure can look like in the logs.

That is why larger planes tend to have dual elevators, so you can lose one. Each elevator should be on a different servo output pin on the autopilot (so separate cabling).
Also, enable the Q_ASSIST_* settings. They are very worthwhile.
Cheers, Tridge

I am still trying to hunt down what could possibly cause this. As I mulled over it the last few weeks, it dawned on me that

@tridge Is the engine of Canberra UAV’s OctoPorter connected to the battery ground (i.e system ground?)

Mounting the flight controller away from the centre of gravity