Newb Questions U Were Afraid to Ask

230’, what matters is barometric pressure from launch, in that case 80’.

You could also verify this by starting in alt hold or loiter, then push right stick up. The Viper will maintain altitude.

Thanks , for that I thought it maybe used relative altitude . Is there a way to make it use an absolute value or take its value from 3d gps data, I wonder?

Joe, you could use SRTM terrain data , but it would be far from precise compared to using the baro. Likewise using GPS only wouldn’t work well, GPS altitude precision is not very good. A rangefinder would get you absolute distance from ground but hard to think of how integration could be done on a SkyViper, both from a weight and connection perspective.

Not sure what you are trying to do, but note that you can use negative altitudes on an auto mission. So unless you need precise terrain following (for which a rangefinder would be needed) I can’t really think of a situation where navigating with relative altitude (from take-off point) would be an issue.

Thanks Oliver , I had no particular reason , other then trying to figure out autopilot logic . I live at the top of a plateau overlooking a large lake on West side and a Ravine, that is a , was a hunting preserve for Prince Edward in 1750 it has a large man made heart shaped pond built then plus a large round cottage built for the princes mistress , where the park meets the shore of Bedford Basin in Halifax . So I was wondering if I could plan a mission to fly from my balcony to the pond which is 250 feet lower in elevation video it and return home 1.2mile . Round trip Minimum safe alt above trees is 55 feet and 125 feet with in 250 yards of my bld. I don’t know if it could make that distance though . I did a test mission yesterday in 200 yard legs changing in alt from 150 ’ 65’ & 45’ multiple times that was a bit father and it took 8min with a 3.5v charge left when it landed . Other then a really blury video it flew better then it ever has . All the large wobble is out of drone but video is worse . I think maybe props need balance but I don’t have a balancer . I’ll look for a make your own maybe see if that works or perhaps just switch them with a bunch of the spares .

Did you try experimenting with the Altitude feature in Mission Planner? I’ve found them to be pretty accurate. 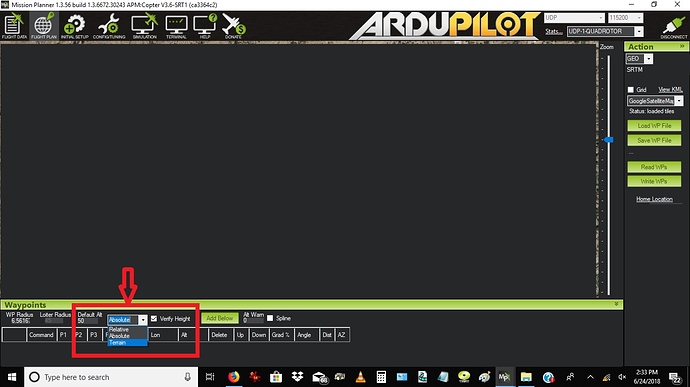 Dough head move of the week by me . So I decided to go down to Prince’s Lodge Park to scout out the tree coverage , which are pretty tall and try to get some video of the heart pond . I launched drone and took it above tree line to see what height I would need 25 Meters seemed to give me decent clearance of about 10 Meters, I then plotted out a quick mission in tower with 12 waypoints , I have 20 meters set as default alt . I made sure to change all the waypoints to 25 and 30 meters except for ROI that I Inserted and left at default. I missed correcting the waypoint that I used next to replace one I used as ROI way point #7 which of course just happened to be on the right hand side of pond where the terrain rises about 30 feet at an angle so steep I was barley able to climb on foot. Thankfully located right away and no , damage Check out Video I up loaded to my youtube Channel

That would be a great use of THROW_TYPE = 1!

Maybe…but very unlikely to work for it. It might bind and then explode. lol

Most DSM2/X transmitters are switch based and such. The SV transmitter is buttons and special code was put into toy_mode.cpp to translate that for ardupilot mode changes and such.

The recommendation is a Taranis Q X7. The OrangeRx I mentioned in this thread will work with the SV, but not everything. The advantage of the Taranis is the modularity.btw, I’ve yet to buy one, but all those folks say it works with the SV and recommends it.

T-mode allows control of functions with button presses instead of the typical Tx multi-position switches. When you go to a standard Tx with a compatible module you would disable Tmode and configure the switches like you normally would for an Arducopter multirotor. The Orange module does work but it can be a bit quirky binding and connecting.

I’ve been meaning to ask for awhile now, the file dates on SV SD card seem to be always messed up. For example any recent video file has a July 08 2018 date . I assume it’s something related to me deleating files off of the card , either with the Web API or if I put card in my tablet and copy and delete files from the file manager . Anyone have this issue or an idea on what is causing this ?

I always have had issues with the dates as well. I really have no idea why though. It is likely that the companion doesn’t have an internal clock and is totally dependant on getting GPS for accurate time? And when that isn’t available, then who knows what it does in the file’s metadata for date/time. Probably someone well versed in FreeRTOS (runs on Sonix) would need to chime in there…

I have been thinking I want to build a quadcopter . I have had so much fun with the Toy type birds I have had . With that in mind I want about same size and light weight, and lower end of power scale . If I get a f350 flame wheel , use the soniX and GPS from the SV as well as the included TX controller. I would just need to pick a flight board esc-s and small brushless motors . Some lights and 2 or 3cell battery I have 2 airworthy SV and other events complete broken frame bird for all the parts I need to transplant. Wonder how cheap I could build this for . And the less soldering the better as I have sad skills . So I need suggestions on exactly what parts I need to gather . I am clueless as to what boards can run arducopter hell I’m just plain clueless about it all . Thanks in advance for tips suggestions and directions

This is what i’m going to buy when i finally have to money to buy it and a Taranis transmitter. 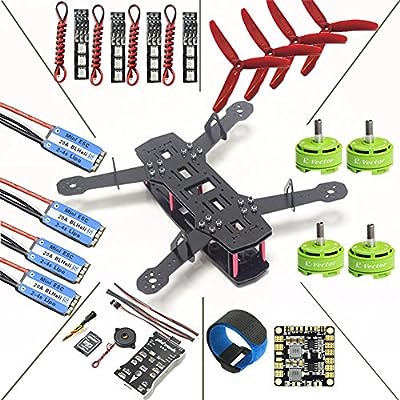 But it doesn’t come with a receiver module, so i’ll also have to buy a receiver and the transmitter…hence the reason i haven’t had the money yet lol

But after I build it, I plan to attempt to integrate the V2450’s GPS+Sonix. It has a PixHawk, so should be able to hopefully figure it out…might just add the entire flight stack from the V2450.

Re #6: What is the method to bind multiple SVs to one Tx? Is this related to @chobitsfan’s thread here which specifies the parameters to change? My goal is to fly two or more SVs on Auto waypoints in Tower using the SV Tx, outdoors. If Launched from different positions and then switched to Auto at the same time via the Tx mode buttons, theoretically each SV would reach a given waypoints in sequence, not simultaneously, right?

BTW - I am grateful for the generous and informative community of experts and DIYers here.

Re #6: What is the method to bind multiple SVs to one Tx?

I think it is for emergency stop. You can switch all copters to land with one radio Tx.