Edit: I should add the mRo has been removed from service thanks to a direct hit from a scale warbird… But the two Matek boards are still in service.

I built a code to measure the time since the last valid rc-value (that’s the decision base of the message).
On desk the regular value is lower than 20ms in every case, so >200ms seems to be a good threshold.

But unfortunately I couldn’t reproduce the “critical warning” on desk to measure a value higher than 200. - so I need to fly.

Maybe the warning is correct and just a little more quick/sensitive then the RSSI?
After I have a warning and a corresponding value in flight, I will change the orientation of the antennas and test again. Currently they are 90° on one side and it’s possible to fly out of sight - but for a test I will e.g. pull them just out under the canopy.

Sorry for being OT but how do I get that “Wind warning” to show up in Yaapu, and where can I set a threshold? I wasn’t able to find anything on it, could be very useful to me.

This is a LUA script:

Thanks, in that case I won’t be able to use it on my current planes (all only 1MB flash).

Maybe the warning is correct and just a little more quick/sensitive then the RSSI?

As an interim conclusion I would say:

So my next step is to measure continuously the values and to manipulate the system step by step:

@Allister It seems you have that issue with all your FCs. So you should also have a look at your transmitter. (What transmitter/receiver are you using?)

If anybody has that issue, too, he should have a closer look at the radio connection and possible hash - and post the result here

Sorry, but that guess has been wrong:

The ardupilot FW seems to work exactly as it should. That warning is an early warning about signal gaps.

Today in the morning I tested the system and the result has been very clear: 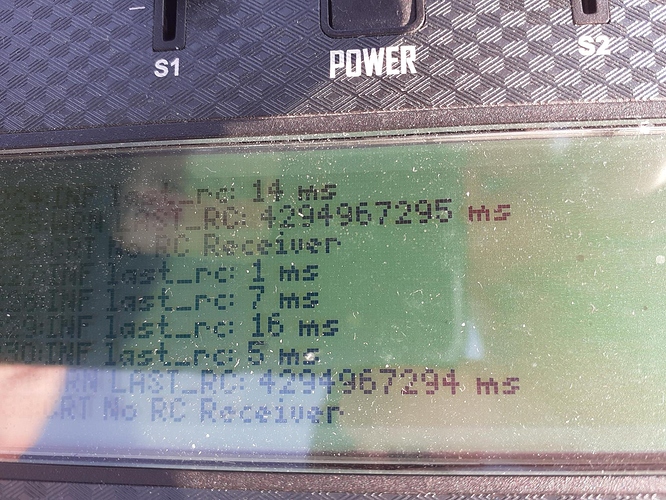 That big numbers are a “negative” result of an unsigned subtraction (-1 or -2).

To fix that, it’s necessary to correct the chronological sequence. First fetch plane.failsafe.last_valid_rc_ms, then fetch the current time millis() and then substract (see lines 118/119).

I’ll start a PR to correct that issue after a positive flight-test.

I’m using a Radiomaster TX16S. The issue is only showing up on Planes using the Jumper R8 receivers. I have a copter using a Radiomaster R161 and no issues there. And depending on how far you want to go in the troubleshooting: I’ve also been using CRSF MicroTXV2 and RFD900 TXModV2 and of course no issues with those.

Thanks for looking into this!

I have a copter using a Radiomaster R161 and no issues there.

It’s just an issue of plane-code.

I tested my fix in the morning in real flight and no more CRT:NoRCReceiver warnings popped up.

It’s just an issue of plane-code.

Yes, I had forgot that when I wrote my reply. Good thing, because I have a student project coming up and they’ll be using R8s in copters so this is one less thing I need to worry about.

Is this change present in the latest beta 4?
Today I flew on beta 4 for the first time, this message appeared again, though only once.

Willy, I just wanted to say thank you! This message was really annoying