Hi.
I had a LAND command issued due lack of GPS signal. This happened after many flights on a crop sprayer 25kg drone with 2 CAN GPS (CUAN Neo V2 Pro (GPS1) and Here3 (GPS2)). I use this setup in order to use CUAV´s compass and Here3 RTK. GPSs are Blended. At the log it is clear that GPS2 went to 0 several times in the last 2 flights. Only in the last flight both GPS went to 0 forcing a LAND.

I could not find any power or other related possible issues. The firmware is 4.0.7. Any idea of what could cause this GPS problem? Flight was with open sky and no apparent annomalies.

I appreciate some insights to find the cause since this is the second time this issue appeared.

Another flight with the same equipment at the same open field coffee platation area. Lost HERE3 GPS 10 times and CUAV V2 PRO 5 times. At the end of the flight both GPS went to zero causing a LAND. I already exchanged both GPSs… Anything to do with UAV angles causing the GPS to loose satellites? But why such a long time to regain signal? 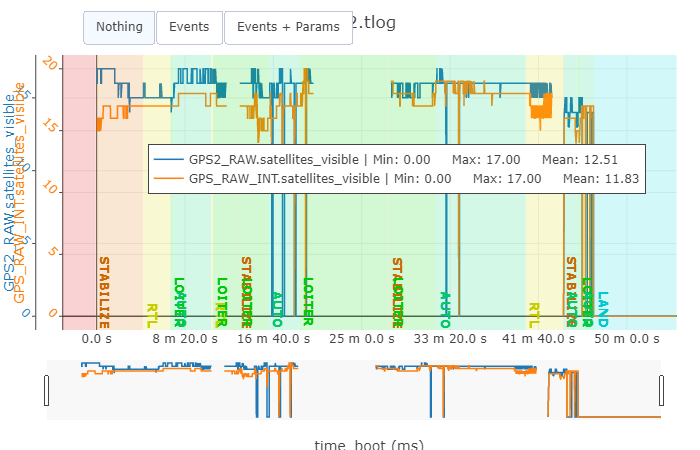 Below one fligt with LAND from te same day and area.

Both GPS’s lose HDOP and Sats at the same time - power would be the most likely source of problems.
I couldnt equate any other events to the GPS issues.

Looks like Power issue. At the same time, Compass is disconnected. 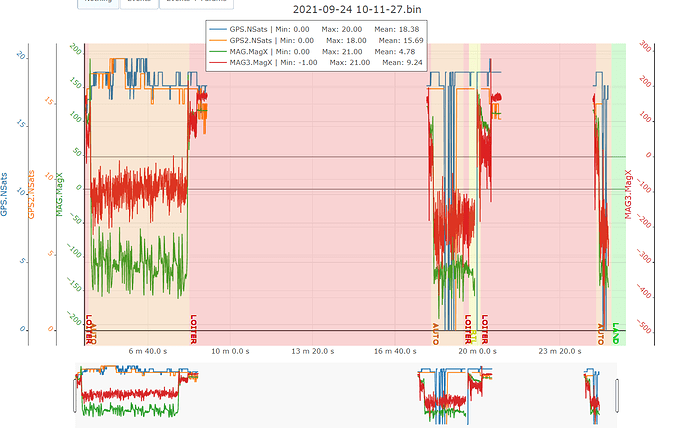 If it is apower issue, could this be a Cube issue since GPA1 is on CAN1 and GPS2 is on CAN2. All problematic flights, GPS2 gets zero sats and seldomly GPS1 gets zero sats. And 5V on Vservo or Vcc never drops below 5.02V.

Take a look at this part of the second flight, GPS2 dies many times… no power issue. GPS1 also has some glitches…

And at the end of the third flight, where both GPSs got 0 sats, and no power issues, LAND happened. 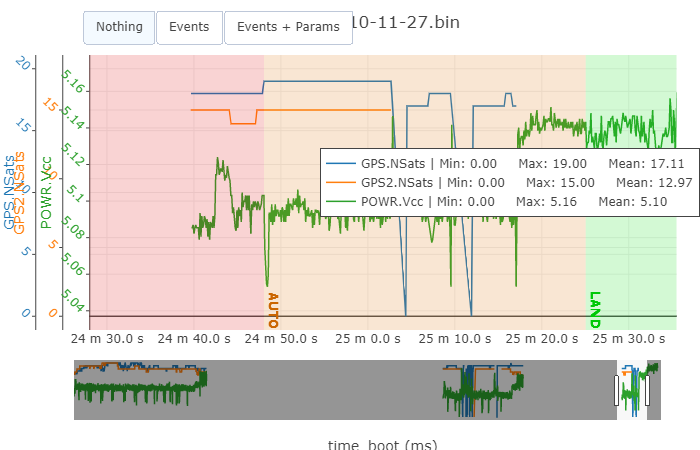 Please help me to find where GPS looses power, I cannot find it. Notice that data is only recorded while flying. This BIN has 3 flights in the same file since battery was never disconnected between flights. This is why there are 2 gaps without recordings.

Hi,
check power status flag, there is a periph power overcurrent.
This may mean a short circuit or overload on the peripheral power supply.
There is flag description.

Really a overcurrent flag. I only have the 2 GPSs connected to the Cube Orange, all the rest with external power supply…