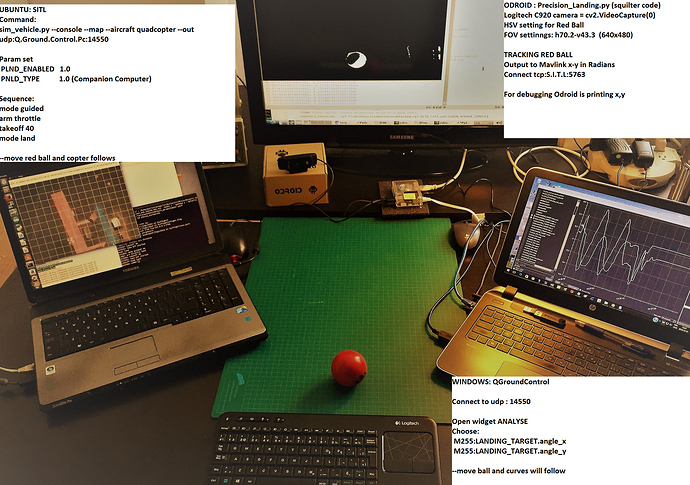 What program do you use and which MAVLink message are you sending to FC (or SITL) ?

I did some prints in the program and I know the camera is seeing the target and getting the values, the problem is I dont know how to monitor them on the Qgroundcontrol. The M255 is not available in the analyzer

Your message looks ok , You had the PLND_ENABLED and PLND_TYPE to 1.0 (Companion Computer) and mavlink message is passing OK from CC to FC ?

Then you should be able to read Landing_target.angle (M255 is relative == search Widget with LANDING)

Yes I have PLND Enabled and Type to 1

I dont know if the message is going through to the FC, when i search “landing” in qgroundcontrol analyzer nothing appears

Unless something changed in the code, that was working ok. Have you tried sending static values of x-y just to make sure?

Yes but still i cant find anything with those parameters

X and Y values should range from -1 to 1 right?

Can you share your camera values please? FOV and size

Looking at my lab picture it was 0,6 to -0,6 and the camera was a Logitech C920
After I worked with JeVois so the GoV did not applied the same way.

Here is the link from my github : https://github.com/patrickpoirier51/JeVois--Python-Tracking
Thats about all there is to it

Awesome thanks!! The Jevois calculates the height? Or how are you getting the Z value?

Yes you can measure distance with Aruco tag but in this case, Z is used to pass the tag ID so you can filter/match the tag with a specific command

Can you please Share your PID values? I got the pY and pX to the FC but its not doing the corrections as it should.

I dont have them as this project is quite old and the initial platform has been rebuild
I i remember well , I slightly over-damped the vehicle.