Hello. I plan on submitting a proposal for GSOC 2019 but would like to have some inputs regarding to the idea I am going to propose.

The idea is heavily based from the idea list, which is to use low-cost camera modules such as JeVois or OpenMV for onboard following specific objects. Suggested AprilTags would be enough for proofing-of-concept, but more sophisticated detection and tracking should be possible if the hardware and its specific software allows. Since these kind of hardware provides means of duplex serial communication, they can be programmed to send MAVLink velocity commands and connected directly to FC, hence its PnP feature as long as it complies with ArduPilot.

Several things that I have thought would needs more usability inputs are as follows :

Any inputs especially would-be use cases expected from this idea is most welcome. Thank you for reading!

This is an interesting field to explore, as there is still a lot of work to get these device easy to integrate with ArduPilot.

Getting these scripts into OpenMV and Jevois , hence not having to use a Companion Computer would be a great start. On a second phase , You could certainly implement more advanced detections based on simple Neural Networks that are now available on both platforms, to control a basic Visual Follow-me solution.

Sorry for the late reply, thanks for all the heads up @ppoirier. Definitely a ton of resources already.

My first steps toward this would be making the environment such that the JeVois and OpenMV could directly send Mavlink messages.

In OpenMV, this could be done by simply importing python libraries directly in the IDE (supported in late 2018) and writing generated commands via its UART API.

I’ll be reading up more into setting custom Tensorflow networks on JeVois and how CMSIS-NN works.

I remember having chatted on the JEVOIS forum about MavLink implementation. It seems that jevois.org is down at the moment , so I cannot reference the discussion, but I think this is the code: 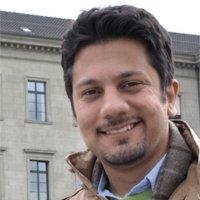 JeVois base collection of algorithms and modules. Contribute to alsaibie/jevoisbase development by creating an account on GitHub. 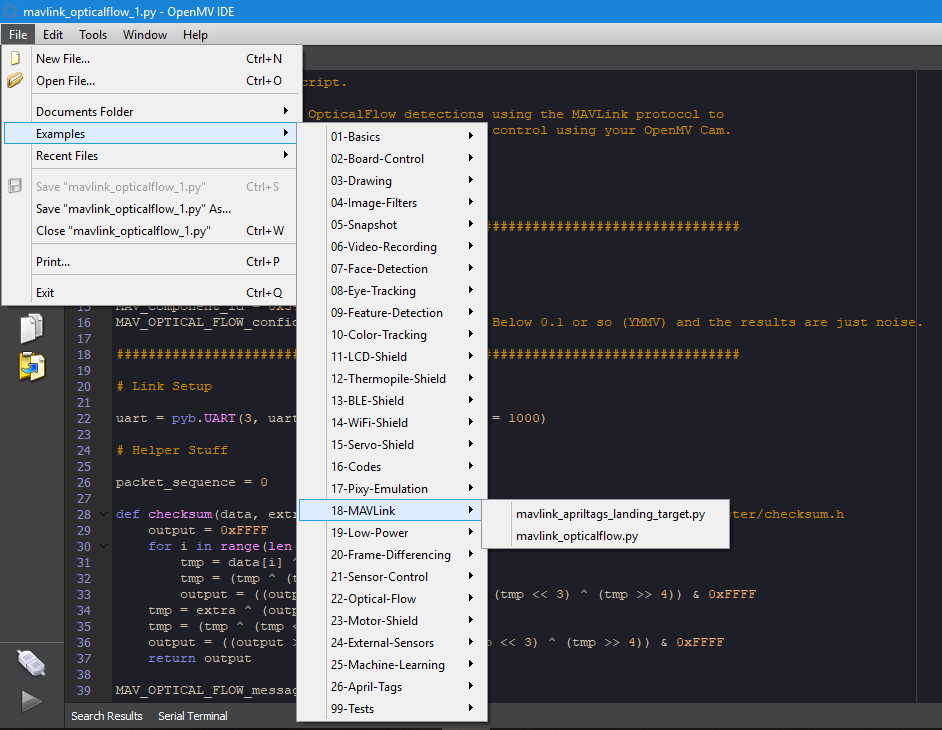 Hello everybody , I don’t know if this is the right place , i’d like to share my idea and to know if have some chance of success or viceversa i’m wasting my time I have an OpenMV Cam and recently i modified the script called “mavlink_opticalFlow.py” to send the information in the same way as Cheerson CX-OF serial protocol [immagine] I followed the instruction to use the CX-OF sensor http://ardupilot.org/copter/docs/common-cheerson-cxof.html I forced to use uart in SITL [immagine] And I…

Oh well, should have worked on my search scope before I write things out. Thank you for the notice.

With MavLink integration is certainly proved on OpenMV, I might have to shift the focus into making it clean by importing the libraries properly as it currently hardcoded right now… and moving out to implementing NNs should be moved up in the schedule

Some quick skim shows that alsaibie’s implementation took a different approach from mine such that he doesn’t touch the core libraries, certainly will read more about that. Was there any problems so far?

if you are planning to build a NN for the the tracking part you should consider options like the Jetson Nano as it only costs 99$ and has the power for real time object detection.

The link you added talks about the BlueRobotics ping sensor …

Yes the new Nvidia Nano seems promising (mine should arrive next week), but the small embedded vision systems like OpenMV and JeVois would make the perfect GSOC as they are affordable and easy to implement.

I personally consider that GSOC should focus on realistic projects that can be completed and documented in the time allowed, I have see too many project not getting completed because it was ‘‘too much’’ for so little time and resources, that is frustrating both for the student and for the community as it does not add to the ArduPilot ecosystem.

Thanks for the heads up about the link … i edited it.

well, after a couple months with the codebase and the community i totally agree with you, the amount of work i have seen done to the GSoC Projects in the past years was amazing but unfortunately only few was merged and i think the reason for that is the amount of complexity surrounding the codebase … Understanding what you are doing and why has become quite the tough challenge for simple students like me ^ ^

Thanks for the notice @MohamedAliRashad. I did a quick skimming and it seems the current problem with the AP_OpticalFlow PR and the script example in OpenMV is about data handling rather than detection speed. The example scripts supplies flow messages conditionally when it’s above certain confidence threshold, while ArduPilot expects constant message streams for its EKF. That being said, throwing up unfiltered messages results in arbitrary spikes. I haven’t read on the optical flow handling from other hardware such as PX4Flow though. Since I would rather take GUIDED mode approach, I don’t see any problems yet as it doesn’t directly affect EKF.

As @ppoirier said Nvidia Jetson Nano, while could be considered low cost, will add too much complications in the work than the end results I’m afraid. I did some works with their bigger, older SBCs and still being a pain for even setting things up without APSync, I can’t be exactly confident with Jetson Nano being a recently released hardware…