Thanks Randy! I will open up new threads next time, good to know!

I’ll have a 3D holder ready by morning.

Hope to get some good flight and testing in this weekend…nice weather is due.

I was guessing that during calibration Pixhawk do that…i was wrong than,for sure it will help me with new X8 wich have 2 gps on side left and right…
But this raises another question;I remember some times ago i asked is it safe to use 2 GPS and i think Randy answered it is ok…so i wrote that in Pixhawk 2 page on Facebook but soon some people tell me they still have bad experience…

"Jason Schreiber;I was using an M8N as my main with the Reach RTK GPS as secondary. GPS set to Autoselect, both GPS1 and GPS2 on auto. The behaviour was so bad I had to disable GPS2. Reach was between FIX and Float and M8N was saying it was in Type_fix 4 (DGPS). Reach corrections were not done through mission planner but on a separate system."
He don’t have logs at the moment but say that copter was almost unusable with that combination…it could be due to RTK gps involved…and my copter still waiting for PowerCube to power everything…

So is it safe or not?i can not risk this time…

Upgrading to 3.5-rc1, is it mandatory to put the position of the imu and gps?

No, it isn’t mandatory, it will work the same as before if you don’t.

Regarding dual-gps, I’ll redirect you to my answer in another thread: Dual GPS: Must Units Be Identical?

Hi Randy, I actually managed to install Mission Planner, but the weird thing is, I cannot find text icons for choosing beta testing firmware or custom firmware. The screenshot of Mission Planner is below. I am using windows 10. Do you know what might be the issue here? There should be text icons like “Load Custom Firmware” close to the “Force PX4 Bootloader”. 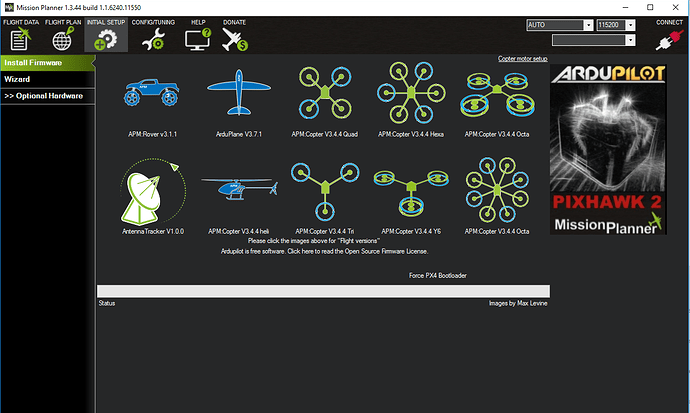 @klytech If you are using a QGC daily build and installing a “Developer” build, QGC has been updated to the new ArduPilot firmware drops where a single Copter firmware runs all the Copter variants. There are no longer variants for Quad/Octa and so forth.

I updated a quad with PixRacer clone from 3.4.5 to 3.5-RC1 with following problem:
After Update following messages are shown in Mission Planner:
PreArm: Compass not calibrated - disappear after calibration
PreArm: RC not calibrated
PreArm: Roll not configured

But RC not calibrated does not disappear after multiple calibration of RC and what does “Roll not configured” mean?

After downgrade to 3.4.5 and calibration of RC and compass everything works again.

Another strange point: Roll and Yaw direction is opposite between 3.4.5 and 3.5-RC1

I have just updated to 3.5.1 . But I don’t see onboard display among optional hardware?
Nevermore I found it. Thanks anyway.

That means your RC roll values haven’t been saved, what values do you have in RC1_MIN and RC1_MAX?

@mfbs17 I’m not sure what you mean. Are you talking about Mission Planner? What would you expect to see there?

That’s exactly the issue. You have the default values. If those are indeed your min/max values, you’ll need to save them to another value and then back to 1100/1900.

@rmackay9 Since we have a pre-arm check for the RC min/max being configured, should we default them to 0? I’ve seen this issue of having 1100/1900 as the actual min/max before and it is very inconvenient to have to write other values first.

Did a test run on a Pixhawk 1 board and had several issues.

Had to redo compass calibration.

Copter flew ok but wanted to fly forward and not back. Had to use full stick pitch backwards to get it fly back.

Landed and disarmed. Then took off again and all was back to normal.

Changed RC1-8_MIN values to 1000 and made RC calibration without success -> same error message.
2nd try: set RC1-8_MIN and RC1-8_MAX to 0 and RC calibration was successful. -> not understandable for standard-user.

A initialisation problem may be the reason: when GPS is connected with 3.4.5 and updated to 3.5-RC1 the GPS is recognized correctly and works. After power cycle GPS will not work.

The Spektrum Receiver has RC values they differ from 1100/1900 and does not need recalibration.