Hi Frank. I’ll take a look at it today and let you know if I can sort it out.

Frank…Does your GPS module have a compass in it as well?

You can, but it’s painfully slow when it connects to

Thanks for explication, I will try again.

@lorbass @Itmac79 A nice solution to this is to use a ‘slow’ long range sik radio between the tracker and vehicle and a fast link between tracker and PC. Wifi telem works well for the fast end, or you can use a second pair of sik radios and turn up the air side baud rate since its only short range.

Hi Peter, nice to see you again.
I tried to made a tracker as described here in the Wicki to use as Video Tracker instead the Cap Camera.
https://ardupilot.org/antennatracker/docs/frame-assembly.html
The Tracker has connected to the Kopter, but then I had nomore Telemetrie Infos in the MP. So I did not contiue because I need Telemetrie in the field.
I used One 3DS TX on the Kopter, one on the Tracker and one with the MP on the same channel.
I’m not shure if this is correct, but in the Wicki are a lot of connections with wires, Antennas, Servos inkluding Velcros

. But not how to connect and setup the 3DS Radios together with the MP. Can you help, please?

When I had it setup, I configured 3 Telemetry radios to all have the same radio ID using mission planner. I first opened MP, then I powered up the the AT and vehicle. I was able to see both on MP, and used the drop down menu on the top right to toggle control between the AT and the vehicle.

I was just using the AT connected to PC via USB for now, with a second instance of MP for the sim. I’m going to do a real world test with radios later today. I was hoping to make life a bit easier by using the sim to learn to tune it.

Yeah a 3 way link does work but is very laggy when using the default settings. You can improve this by turning down the mavlink stream rates for the tracker leaving more for the vehicle. Tracker (actually all vehicles) forwards any mavlink streams it gets in one mavlink serial port out of all the others. So just setup your two links in tracker as mavlink serial ports.

@iampete
I made a connection diagram as I understood your advise.
Can you comment if the wiring is correct and how to set the Params e.g. Serial and if the ID # of the Radios must be the same or different.
And I will modify it to help also others. 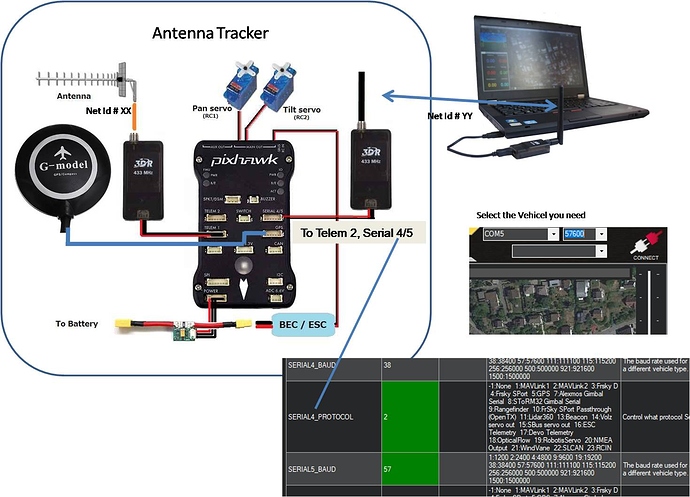 That is correct, just set both serial ports to Mavlink. The laptop -> tracker radios should be on a different net ID to the tracker -> vehicle radios. For the laptop -> tracker link you can turn up the ‘Air Speed’, this is the baud rate they communicate with each other at. Low air baud rates give more range and higher baud rates give more bandwidth. Since the tracker is not far from the laptop you can up the baud rate to give enough bandwidth to talk to both vehicles.

Is the connection to Serial4/5 correct, or should it be Telemetry2 ?
To tune the Params of the flying vehicle works it as usual with direct link?
And is the Tuning of the Tracker with the same setup possible or may be with a USB link?
Of course I could find it by trial, but I would like to update the diagram and have actually not the needed HW.

Is the connection to Serial4/5 correct, or should it be Telemetry2 ?

To tune the Params of the flying vehicle works it as usual with direct link?
And is the Tuning of the Tracker with the same setup possible or may be with a USB link?

Yep all is possible as normal, you can setup both, just make sure you have the correct vehicle selected in the drop down to the right of the connect button in MP

Thanks for the competent and quick explanations.
I will update the diagram and I’m motivated to order a Pix to try it a third time.

Edit: For the Params Serial_Protocol Mavlink1 or Mavlink2 ?

For the Params Serial_Protocol Mavlink1 or Mavlink2

Doesn’t really matter, although I think the general consensus is that if possible you should use mavlink2 on everything, the only reason the default has not been changed to this is that some older telemetry radios only support mavlink1

Ian,
The GPS module does have a compass in it, but I did not connect it to the tracker (Pixhack) as it causes a lot of trouble such as COMPASS VARIANCE. SO I only use the built in compass in Pixhack, as you can see from the param which I attached…values shown only under mx. my and mz, but zero for mx2, my2 and mz2.
Frankie

I use alway the external (GPS) Compass because it is far away from electrical wires. This is more important in a vehicel like copter with high current consumption. But then, I deselect the internal Compasses (2) for the mentionned reason. (MissionPlanner/Initial Setup/Compass

I would try it anyway, regardless of whether or not the compass is connected. I thought the same thing when I was trying to get my pitch to work. I kept telling myself that it cant be the problem because I pulled the compass/i2C wires out from the harness. I spent over a week going crazy trying to figure out what was wrong. When I finally did move it to the pitch carriage, and connected the compass, it started working correctly. I think there are some bugs in the AT firmware that prevent it from allowing us to disable or configure compass parameters other than what it expects to see.

Give me a few minutes and I’ll pull my parameter file and share it here.

Yes, 0° for pitch is level with horizon.

When using the servo test function, I don’t believe the range settings or servo reverse settings are used. 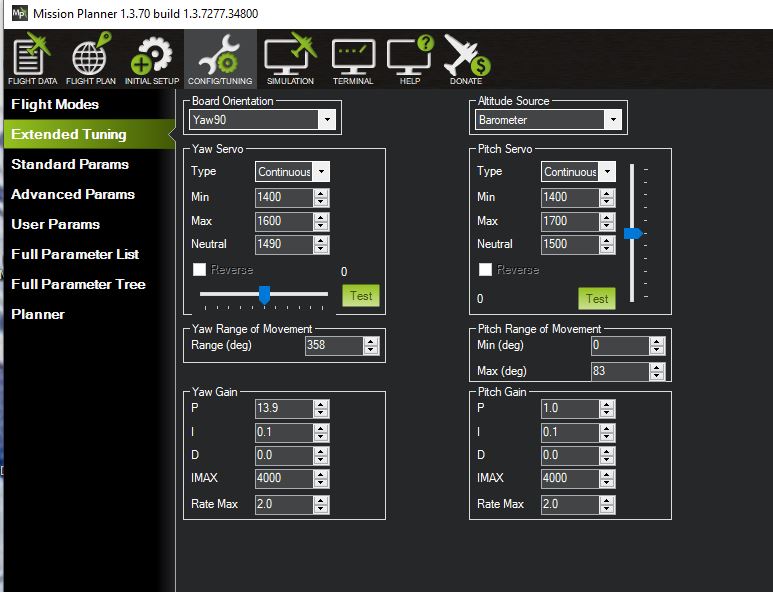 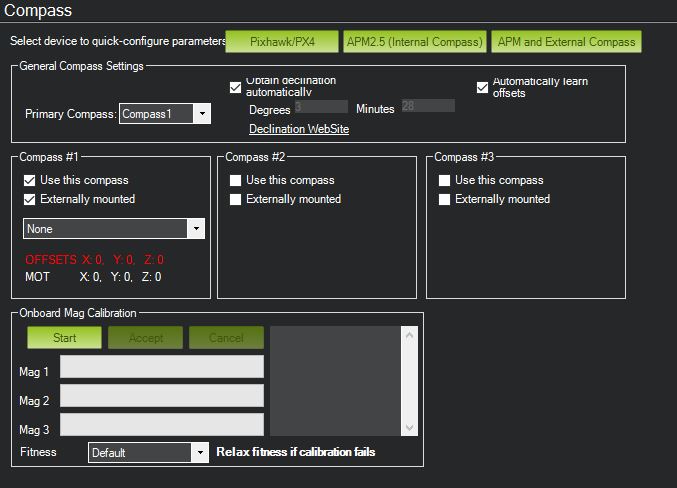