The log/flight I had shown also had the 7inch quad lugging a gopro 9 so I wouldn’t be surprised if that contributed to some gyro noise.

The other possibility here is that expo MOT_THST_EXPO is wrong - 0.5 is pretty low for a 7" - and if expo is wrong then the tune will be bad at the edges - i.e. maximum and zero throttle.

But it had no issues holding the rotation and attitude for the first 1-2 seconds; I would expect tune problems to occur on a time scale of milliseconds.

It may be hard to see the deviation the video because I applied throttle very quickly after I felt something was wrong.

As an aside, the quad freestyles otherwise well with the new expo rate =)

The first thing I noticed is we have missing data right where this problem happens.

Andy is right that you have ridiculous levels of noise. You can see where the logs are missing more clearly here:

There is no sign that the aircraft stopped stablizing:

So I can conclusively say that this is not an air mode problem.

Looks like your branch has the fix but your log definitely shows the motors spooling down, so not sure what is going on.

I am not sure where you are seeing this mate.

I can’t see any signs of processor overload. Vibrations spike there so maybe vibrations are messing with the SD card connections or something and causing the lost log messages. In any case I can’t link this to some sort of processor problem.

So I see a number of things here:

I can’t see any sign of the air mode issue so I feel confident that fix has done the job. Like Andy I think the problem here is tuning and setup. In particular from what I can see you effectively don’t have a harmonic notch or a gyro filter.

I hope this helps!

Thanks again for the extremely detailed analysis and I’m a bit embarrassed about the harmonic notch not being set up correctly (I thought I had ported all of my param values properly after flashing new firmware). I’ll check that again.

But I still don’t believe this is related to tune and I can do two things:

If you fix the tune problems first any bug that is present will be much easier to see.

It would be good to use the latest release too.

I missed the notch!

Without the harmonic notch properly configured and the gyro filter at a reasonable setting all bets are off. I’m surprised you were able to fly at all to be honest

Ok, I really want to link a video of my test flight for this tune because it’s actually pretty neat I can do this now on Arducopter.

I won’t say this is final tuned; there’s still a little propwash wobble and I noticed a bit of shake (it’s the first time I’ve watched it on a computer) but otherwise I didn’t feel any problem flying. Whereas in other video I linked I can really feel the quad lose it.

I think probably all this indicates is that your frame is big enough and your FC mounted soft enough to get away with it. But you are missing out on a whole bunch of control.

I concur the tune isn’t great after watching the video (darn those rosy memories), but I was more trying to highlight there’s a substantial difference in quad authority in this flight vs the last moment of the other video. It doesn’t feel like the same problem.

I’ll try to fix up the tune, see if the throttle WAR works, then new firmware build.

Think of it this way. You have a lot of room to make it even better than it is now

I have a H743 build that’s still waiting to be calibrated and tuned, so I was wondering what that may be able to get me. Can I run a higher loop rate than my F405 and would it make a big difference?

Also completely off-topic, this video came up as a recommendation after my video. It’s super entertaining. 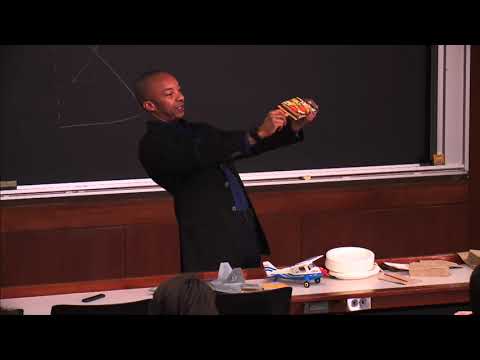 Yes, you can run at a higher loop rate - and also you can run the IMU backend at a higher rate (in fact 2Khz is the default rather than 1Khz). Finally you can also run the notch updates at the loop rate. All of these things will give you more precise control and lower noise.

As an aside it seems like that ‘grind’ problem from the other thread reared its head when I enabled the harmonic notch but lowering the filters took care of it as we saw before. I’m not going back down that rabbit hole

The control is also fairly tight so far, but occasionally it feels like the quad jumps from “slow to respond” to “snap in place” to my commands when I’m doing a lot of stick movement along with throttle movement.

It’s hard to describe, but it’s like if I go low on the throttle, do a hard turn, then apply throttle, it feels like the quad initially responds with 50-70% of the speed you’d expect, then suddenly snaps in place.

I’m not sure I can capture this in video. Does this sound familiar though? Maybe I should increase mix-man?

Yes, this could be mix man.

I was looking at this conditional in land_detector.cpp. I tried but couldn’t trace where control_in gets set based on radio input, but I’m guessing that if the radio throttle is at minimum, then control_in will be zero (it’s a <=0 conditional so I was curious if the value is signed and zero meant something else) and this sets the rpy_throttle_mix to mix_min even if air mode is enabled?

I’d like to ask for some advice on fixing my quad wobbling terribly during slow descent through its propwash (and continuing to wobble terribly for the 1 second throttling out of said descent). This seems to be the only major tune issue remaining as I can otherwise do flips/rolls and cruise pretty smoothly. 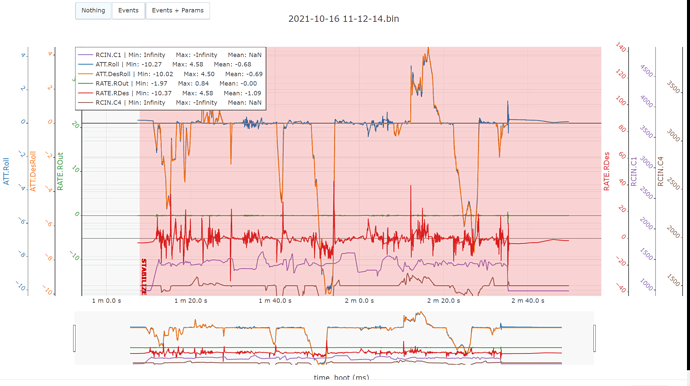 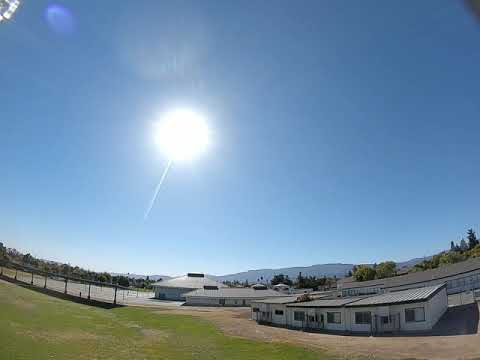 I tried lowering my PID proportionally by 30% and it behaved about the same (maybe slightly worse). Should I fiddle with thrust expo? This is a 7" with 2806.5 motors, 7x3.5x3 HQ props.

I can reproduce this in acro and in stability mode, so seems unrelated to mix.

It is primarily in roll. It looks like this is primarily a rate loop problem. And most of the disturbance is running through the D term.

High Mix Man ensures this is not a loss of athority problem.

Expo is a little high for a 5 inch quad so the low throttle may be pushing it over the edge.

It looks like you are tuning up roll and pitch together so it would not surprise me if one of them was out, in this case roll.

This is not a problem just in decent. I can see this througout the flight.

The occilation is at 20 Hz so this isn’t something you can practily reduce using filters. You will need to reduce your D term low enough to stop the occilation then manually tune the P and I. But just on roll. Pitch looks ok.