I’ve encounter a strange problem with my Enhanced Camera Trigger selectively generating CAM messages and I was hoping to get some feedback to see if I may be doing something incorrectly!

Here’s a brief run down of my problem:

I am using a Seagull #MAP2 to trigger a Sony A6000 camera, along with a Seagull hot shoe to detect the shutter trigger using the Enhanced Camera Trigger on AUX5 (pin 54).

Because my hot shoe was not designed specifically for the Pixhawk, I created my own servo connector with an inline resistor following the design of the image below (courtesy of @bchristal). I am using AUX5 as my digital input pin (BRD_PWM_COUNT=4, CAM_FEEDBACK_PIN=54, CAM_FEEDBACK_POL=0). When using a 10k resistor, I measure 300 mV resting across the hot shoe’s centre pin and the AUX5 pin. This value drops to ~100 mV when the shutter triggers. I’ve also tried using a 1k ohm resistor, which results in a resting voltage of 2.0 V that drops to 1.2 V when triggered. In a GitHub comment, @bchristal notes that 5V should be resting on the centre pin of the hot shoe, and I’m not exactly sure why I’m not seeing this voltage. 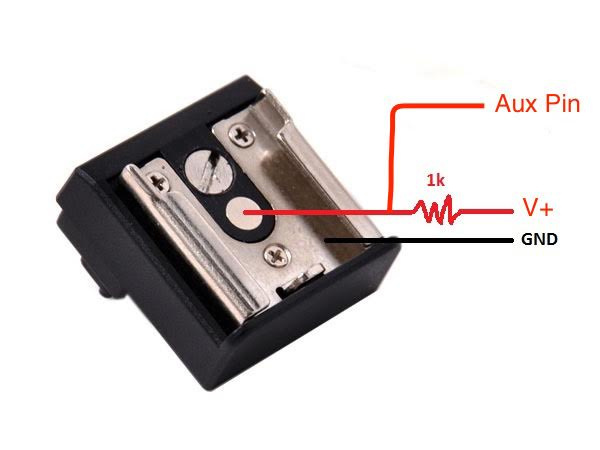 The main issue is that the Pixhawk is no longer generating CAM messages when a) the camera is manually triggered by hand; or b) when I make use of the #MAP2’s intervalometer, which triggers the camera using a switch bound on my radio and an RCPassThru on RC12. In both cases, the Pixhawk is armed when the test is run.

However, if I use Mission Planner’s “Trigger Camera NOW” function while the aircraft is armed, CAM messages are generated. The bizarre thing is that this wasn’t always the case. When I began my initial testing of the Enhanced Camera Trigger, I could manually shoot several photos with the aircraft armed and I’d get CAM messages for each photo. The other spooky thing is that when I tested this problem on a second aircraft (3DR Iris+), I had the exact same issue until all of the sudden there was ~5 V measured across the centre pin and I was able to arm the craft and generate several CAM messages by manually shuttering the camera. After this success, I rebooted the Iris+ and attempted the exact same workflow but my voltage had gone back down to ~2 V (with the 1k ohm resistor). To me it sounds like something fishy is going on.

I am curious if anyone can spot where I may have made a mistake and would certainly appreciate any thoughts as to what may be going awry.

I’ve attached my parameters just in case they can shine any more light on the issue.
EHC.param (10.3 KB)

Just a quick update. I conducted a few flown missions to confirm my earlier observations:

It’s clear that the hot shoe connection is working properly, as CAM messages can be produced. Just not for every scenario, it seems.

CAM messages will only be generated after a first trigger event from the autopilot. See this comment from @WickedShell

Thanks for your reply! I remembered reading your post but it’s only now that I realize how much relevant information it contains. Did you ever find a solution for getting a CAM message with your Pixracers?

I spoke with Seagull UAV and they confirmed that not generating CAM messages when using the intervalometer is expected behaviour, as there are no trigger commands issued by the Pixhawk. This is unfortunate, but I could have sworn that I was previously able to produce CAM messages by manually triggering the camera by hand.

no… I made another test but unfortunately no solution so far. I am using Canon cameras and thus do not really need the feedback. Although it would be good. I’ll make further tests next week.