Thanks ,Kenny Hope to be up and mowing soon.,
Have a Blessed Day,Rustey

OK ,Yuri again thanks, can that be the problem with failsafe that the two gps 1&2 do not agree?
Regards Rustey

You won’t get a failsafe just because RTK corrections aren’t happening on GPS1. There should be messages telling you what failsafe is triggering.

In theory, since you will be configuring the GPSes yourself (not depending on ArduRover), you can set the baud rate between the Moving Base GPS and the Rover GPS to anything you wish. I had mine previously at 115,200 and it worked fine, but I was using exclusively F9Ps with 2 UARTS.

BUT, I do not think it matters that you can theoretically set the baud between the GPSes to what you wish because of the single UART issue posed by the C94-M8P:

For proper GPS for Yaw, the Moving Base GPS and the Rover GPS should be connected to the Pixhawk. Since you plan for one of those to be a C94-M8P, which only has one UART, that UART’s baudrate will have to be 230400. That, then sets the baudrate coming IN to that UART at 230400 also, which sets the baud rate of the GPS feeding it to 230400. I might be going around in circles, but it is clear to me, that you will have to have the baud rate at 230400 for all GPS UARTs.

Thanks for helping me in this.I have assumed that i dont need to set type 17 and 18 if i connect both gpsses directly between themselfs as i read somewhere here.I must have missunderstood or it has changed. So 230400 is the key indeed.Thanks

I think you need to set the GPS types to 17 and 18 so that ArduRover will know that you have a GPS for Yaw setup and will use the heading information from the GPS to determine the vehicle heading.

If you look at the way ArduSimple suggests using their daughter board configuration, it appears possible to just have a single connected rover GPS tagged as type 18 and still get yaw, so long as the moving base is providing RTCM3 to the rover. That is not in accordance with the developers’ suggested configuration, and I can’t recommend it as a viable long-term solution.

I have tried a few combinations and the closest i get is using fixed base C94 and rover that obtains RTK fix. I feed RTCM from C94 rover to F9P second UART and it reaches float only, but with gps heading precision within one degree in u-center. On pixhawk i configure f9p as type 18 and C94 as 1 (auto) and both show up respectively. While RELPOSNED in u center shows correct heading and distance between antenas, i dont get usable heading in pixhawk. I get yaw 65535. The rates are set to 4hz which is kind of max for C94 using two constelations. I have ordered another f9 (to avoid frustration:) but i think this could work as well. 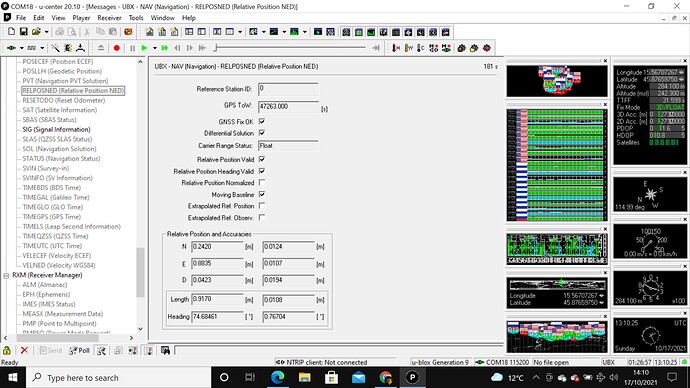 Anton, It sounds like you have done some good experimentation. It is hard to know if you are just missing some small setting or something or if there is a reason this won’t work because of the expectations of Ardurover. If I had time, I would be interested in trying this also, but it would take a good bit of wiring and modifying what I have working. It would be nice to make use of the old C94 modules I have. But, I may use the C94s on some other vehicles that do not need the precision of a mower.

I think you made the right (but expensive) choice to get another F9P.

Thanks Kenny i knew you would understand. After all i try to follow your discoveries with a year or two delay

I have Rover 4.1 and are trying to set up GPS Yaw using two Zed F9p boards. I followed the tutorial on the Ardupilot wiki as well as everyone’s recommendations on here however even with setting the GPS offsets, the direction of the vehicle is about 130 degrees off. I am connecting the two UART2 between the two GPS boards. Any idea on how to fix this?Yaw_params.param (14.7 KB)

What are the physical locations of your antennas with respect to the autopilot?

I see no smoking guns in the parameter file. Are you actually getting valid GPS yaw? If you look in the MAVLink Inspector, does the value for GPS2_RAW.yaw show a value between 0 and 36000? What is the GPS fix status for GPS2 (RTK fixed)?

65535 is an error value. The fact that you have an RTK solution on GPS2 is a good thing - it means that your UART2 connections are correct. However, the solution is not good enough to provide yaw. Give it some more time to initialize (disarmed and stationary) and/or make sure there is a clear/unobstructed view of the sky.

Thanks! I will move it to a more clear location and wait for a longer time to see if it gets a better signal.

I recently bought an Ego 42" Zero Turn electric mower and the GPS and ArduPilot hardware to automate my lawn mowing like the rest of the trailblazers on this thread. Thanks to everyone here for their hard work. I had thought about bypassing my levers too, but I’d really like to be able to mow traditionally as well sometimes, for training, odd jobs, or whatever. This is one big advantage of Yuri and Kenny’s servo setup. Perhaps, I could use an override switch to take over the analog signals when under autopilot, but pass them through when not. I guess at minimum, I could use the same connector style and trade which one is plugged in manually. I’m curious what you used for DC/DC stepdown from your mower’s battery system to your flight control computer.

While you certainly can do it, I’d strongly recommend having some mechanical disconnects between the manual controls and your servos. Your servos won’t be happy long term being forced to move unpowered. As far as the dc/dc drop, check out BECs. Standard item in the R/C world with many options. Good luck!