My name is Hugo, i’m pretty new to Ardupilot but I already built 2 workings quad based on PixHawk 2.4.8, now I decided to build a Hexacopter.
Pretty much everything is working, except yaw control.
Copter is going on around 285 Degrees when taking off, and then the only way to move it from this yaw is to apply yaw to radio on left and then it finaly move, bot nothing when asking yaw to right …
Also, missions works almost, but yaw is doing weirds things like 360 sometimes etc.
No idea what is happening, and here is a screenshot of the logs with my radio yaw command and copter’s yaw :
https://imgur.com/PBpnmln

Hey ,
Thanks for the reply.
I think this issue is solved as after a new compass calibration with GPS lock, everything works perfeclty … At least almost cause in my last flight the drone suddenly made a strange sound and wobbles for a second and after landing I saw EKF changed to 1 in flight cause the baro suddenly indicate a wrong altitude. Also, auto analysis says large change in mag field ( 145% ) which is just anormal.
Do I post today’s log here or I create a new topic ?
Again, thanks for reply, what a feeling to get a chance of being helped !

Open a new topic and post a .bin file there.

It looks like there is a very large motor imbalance. Maybe check that all the motors are spinning in the correct direction, propellers are on properly and that none of the motors are leaning. 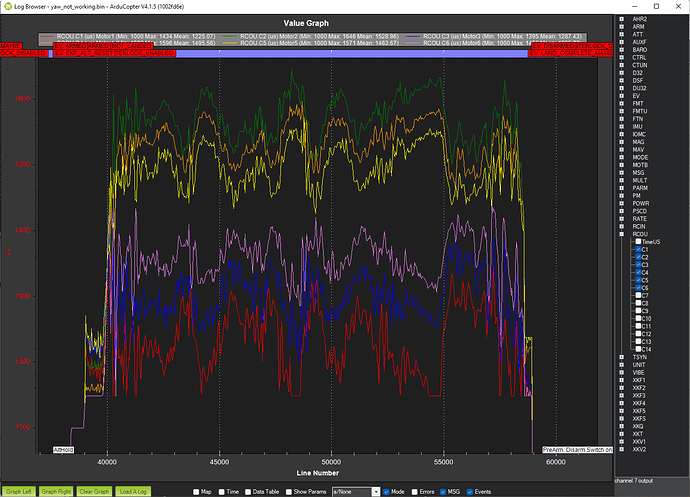 Hey,
Thanks for replying.
I just checked all the props and motors spinning direction, everything is correct.
One motor was a bit leaned so I correct that but there is no way a single motor leaned from 2 degrees can cause that much of motor imbalance.
During the flight you checked, one of the propeller was smaller than the 5 other, but now that I have 6 brand new props and as you can see here, there is still a lot of trouble :

In this log, you can also see other problems ( lot of vibrations, EKF changing in mid flight etc, everything about this is here :
EKF changed to 1 in flight -> Almost crashed

there is still a lot of trouble :

And as stated you have a mechanical yaw bias. See the CCW motors commanded higher than the CW motors? Twisted motors, arms or frame distortion is the typical cause. It doesn’t take much.

Ah, those vibrations that @dkemxr shows are really high especially in the X-axis (forward-back I think). For the Z-axis up to 30m/s/s is fine. Between 30m/s/s and 60m/s/s is where problems start to appear and above 60m/s/s problems definitely appear… but on the X and Y axis the troubles start appearing at even lower vibration levels…

We have advice here on the wiki regarding vibration isolation.

@dkemxr @rmackay9 Thanks for the tips/help !
Here is my today’s flight log :
https://www.dropbox.com/s/lve1q42iezd68g0/improvement.BIN?dl=1
Almost all my vibe is under 20, which is good compared to my 40 average from yesterday !
Modifications : deleting the 2nd “floor” and adding an Anti-Vibration Platform.
And btw I double checked every visible vibrations on the drone, i found it !
Motor 4 carbon tube can be easily moved by hand from 2-3 degrees but that makes it wobbles a lot !
Idk how I didn’t see that before !
I’ll try to patch this vibration and I come with the log later.

THANKS a lot guys you’re helping me so much !

Nicely done! … an enormous improvement in the vibration levels. 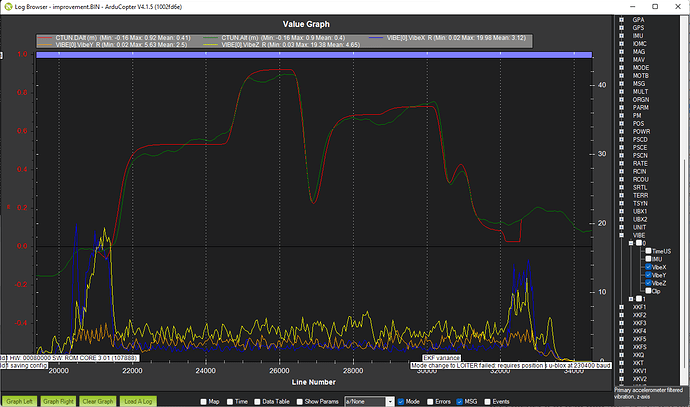 Thanks everyone for helping me, problem was solved by recalibrating the compass with full GPS signal to help Ardupilot compensate the magnetic difference between your calibration site and your flying site :

“It is not necessary to recalibrate the compass when the vehicle is flown at a new location because ArduPilot includes a “world magnetic model” which allows converting the location’s magnetic North to true North without recalibrating . In addition the location’s “inclination” is calibrated at startup and then again soon after takeoff. It is important that when compass calibration is done, the vehicle have a good 3D gps lock, in order to assure the best setup. If necessary, move outdoors in order to get a good 3D gps lock before doing the compass calibration.”

Also, thanks for the tips to reduce vibration etc, everything is solved in this side of the copter.