Chris, With all your help I am finally test flying. In roll and pitch the helicopter wobbles. I tried resetting VFF from 0.055 to 0.15 for pitch and roll, No help. I set it back. Helicopter does have fairly low head speed but is light weight and low disc loading. Advice? Ed

Ed, I just about missed this, best to have it in the Traditional Helicopter section of the forum.

Anyway, this wobble is hard to say if it’s because of the rate controller being tuned too tight, or because of a mechanical instability in the helicopter due to headspeed too low. Light weight and low disc loading does not always mean it will be stable - these are actually the most unstable of all helicopters. You can even experience LTE if it runs too slow. The heavier they are and the faster you run the main rotor, the more stable they get.

The best would be to post a log of a flight where it is doing this wobbling so we can see if the SAS is chasing a mechanical instability, or if it is the stabilize controller causing it.

Chris, previously, this helicopter in its present updated form has flown nicely with a Spirit, flybarless controller. No wobbling. Linkages are smooth and tight throughout.
Originally, the Kyosho EP Concept had brushed motor, analog servos and flybar.

Chris, I put the SD card in computer. It shows lots of .bin files. How do I read them? Should I send you the latest
.bin to analyse the wobbling problem?
Do you know if Spektrum satelite receivers work in the Minipix? I binded it to transmitter with a Spektrum 7 ch receiver. Then connected it to my second Minipix. No connection. any advice on this?
Ed

Yes, one of the .bin files with a flight with the wobbling going on.

I’m not sure about the Spektrum receiver with a Minipix.

Is there a person who would know about using a Spektrum satelite? I am currently using a Radiolink R12DSM with a Radiolink AT9S transmitter.

Is there a person who would know about using a Spektrum satelite? I am currently using a Radiolink R12DSM with a Radiolink AT9S transmitter.

You could ask in the hardware section. I have not used a Spektrum radio for over 10 years.

My opinion is that you have the ATC_RAT P gains too high for pitch and roll for a helicopter: 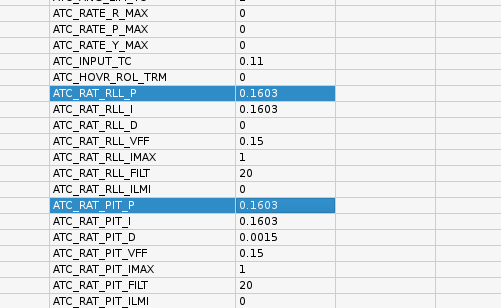 While your elevator servo appears pretty stable, it is causing rapid oscillation of the aileron and pitch servos and this makes your wobble.

Typical settings for those would be 0.04 to 0.08 and VFF values around 0.15. And much higher I-gain than you are using. Since you have the same values in pitch and roll, and very few (if any) helicopters will require the same values in pitch and roll in the rate controller, it looks like you may have tuned these with the Extended Tuning Page in Mission Planner or something. Which is not recommended for heli’s.

Since you are flying 3.6.7 there is defaults that have proven to fly any helicopter they have been put in (so far) with only minor tweaks required for the tail sensitivity, and little helicopters will like higher values for these three, usually 110000 for pitch and roll and 27000 for yaw for a 450

If you want to do your own “tune” we have a detailed wiki on how to do it. However it is a long arduous process and simply starting from the defaults noted above and doing some fine-tuning is usually just as effective and much easier.

Chris,
Your correction in the parameters were perfect. Wobble is gone. Now it flies. It obviously wants or needs a bit more main rotor speed.
I put a main rotor RPM reader on the tail boom. It shows 1760 rpm. I think it needs to be at least 2000 rpm. I am going to change the motor pinion to a couple more teeth. I attached a small WATT meter to the left skid. At full power it only shows 14 AMPS, so the motor and ESC can handle the larger pinion.
Will send a photo from my mobile in a few minutes.
Progress with your help.
Ed

I use the rule of thumb that whatever it takes to hover it at about 4.5 - 5.0 degrees of pitch is the right headspeed to run for a UAV heli.

Just changed the motor pinion by 3 more teeth. Head RPM is now at 2000 and heli is much more stable.
Collective pitch servo moves strange. It is quick in mid range travel and slow at low or high end. Why?
I would like it to be same speed throughout, preferably, slow.
It is much too sensitive in mid range. collective should be linear.
BTW, not setting it up for acro. Not into that flying with helicopters.
Any advice? Could do a hover and send a .bin.
EDLASTLOG.TXT (4 Bytes)
00000034.BIN (456.1 KB)
00000035.BIN (752 KB)

Chris,
Minipix/Arducopter will always be a mystery!
Now, main motor goes to full throttle (slowly) as soon as the helicopter is armed, Moving the “throttle/collective”
stick has no control of motor/rotor speed? It should follow the throttle curve I set.
What parameter have I got wrong?
solved proiblem but could not delete this post!
I’ll do some flying and get a good .bin for analysis.
BTW, how do I review the .bin file and print it?
Ed

I’ll do some flying and get a good .bin for analysis.
BTW, how do I review the .bin file and print it?

You can look at the .bin in Mission Planner or APM Planner2. Or, if you wish, there is an excellent online log tool that I use all the time.

I tried Position Hold. It held position, but the collective was jumping up and down by a few inches–a vertical wobble? How would I correct this?
Ed

Try reducing PCC_ACCZ_P value a little. This param. if to high is causing the collective oscillation.

Fred, in stabilize mode it is fine. The collective pumping only showed up the first time I tried position hold. I will try your suggested solution. Although this was happening, the helicopter did seem to hold position. Thanks for the reply. Ed

Fred, I found that the values under ACCZ have not been entered from Chris’s list/advice. I entered them and in some wind, test flew. The value is .28. When I try next, I’ll set it at .20.

Chris and Fred, With ACCZ set to .20, the hover collective is smooth, no jumping.
Hover is much better, but probably not optimum, yet.

What is the functional difference between LOITER and Position Hold?

Di I have full control of the helicopter in these modes?

This log file is a short hover then switch to loiter and back to stabilize for landing.

What is the functional difference between LOITER and Position Hold?

In Loiter you do not have control of the helicopter. The autopilot controls it and you make requests to the autopilot to cause it to move. So Loiter is not as smooth as Pos Hold.

The downside (upside for me) to Pos Hold is that if the helicopter is in the wind as soon as you move the stick you have full control of the machine and have to fight the wind manually just like if you were in Altitude Hold.

Neither mode is 100% safe for takeoff or landing with a helicopter. Although some claim they do it all the time, I have had too many GPS screw-ups in ground to air transition and I refuse to use those modes in a critical flight profile.

The other difference is that Pos Hold has no speed limit. You can fly at 90kts (if your helicopter has enough power) in Pos Hold with no problems. In Loiter you can’t. It has a speed limit set and it is not smooth when it hits the speed limit and porpoises badly. For that reason I recommend setting the speed limit to 3000 (about 58kts) for Loiter so you don’t end up inadvertently coming up against the speed limit if you are flying it around in that mode.

I personally do not use Loiter anymore as of Copter 3.6 and later. It is not smooth enough for my tastes for a heli. But I still recommend trying it to draw your own conclusion as to which mode you prefer for GPS-assisted position holding

Neither Loiter or Pos Hold have normal collective control. So the helicopter can’t be autorotated in either mode. Again, I recommend not using those modes unless you are in a safe flight profile, not in the dead man’s curve, where you have time to switch to a manual mode if autorotation becomes necessary.

With drones none of this makes any difference since if they quit in flight they crash anyway. Helicopters are perfectly happy to stay flying without power as long as the controller is in a manual flight mode. So unless you don’t care and are ready to accept the consequences, procedures for helicopters are different than drones.

None. Helicopters are not drones. They can’t be made to be like one. Helicopters are true flying machines. Drones are proof-of-concept devices that if you bolt enough motors and props to a battery you can make a battery become airborne. Trying to make a helicopter become like a drone is fruitless - not gonna happen.

Also, Ed, I have log software in this computer and I looked at your log. You have high vibrations, especially in the Y-axis approaching 70 in flight. And getting steady staircase clipping on your accelerometer all the time you are in flight. That is too much vibration and you must come up with a way to damp that or the helicopter will not fly decent.

I also see a steady oscillation in the gyro and accel (IMU) that indicates to me that you have an out-of-balance condition in the main rotor, or blades not tracking properly.

What a fascinating reply. “Enough motors to lift a battery!” Helicopters are much more challenging.
Will study the out-of-balance condition and report findings.
What is “staircase clipping on accelerator”?
I tried to see the logs in MP. I really do not understand what the graphs mean or how to interpret. Does Ardupilot give explanations?
A few weeks ago, I flew the JCZK helicopter and switched to position hold. I liked how nicely it flew and how nicely it stopped when I released the sticks to center. That’s what I want to achieve with the Kyosho.
How to adjust power/collective so that position hold and loiter are the same stick position as in stabilized flight?
BTW, I am in FL, where are you? Nice here.