Why does APM have RTL GPS issues?

I’ve had problems with APM mini 3.1 crashes when an RTL is triggered and Nsat is like 3 or 4, resulting in a fly away. My question is why if the APM knows the number of sats at the time of a RTL it doesn’t say opps Im lacking in sats and just land where it is?

Telling it to land might have your craft landing somewhere you don’t want it to. Why did your machine have such a low sat count? How do you know that was the problem? Its wrong to say the code has issues, perhaps your clone does??

I would rather have it land and crash nearby than to take off maybe never to be seen again! Why such a low sat count? Thats a good question what do you think I suspect its because all the GPS boards for the APM mini use the Russian sats which number about 10 less than ours. sometimes I get 12 sats, but when I’m flying I have no clue, except when RTL is triggered and the GPS causes a flyaway. I know of the problem because I checked my logs. My original question still stands why is it if the flight controller knows the sat count is unreliable for positioning why does it still try to use it anyway? If my drone has issues can you help me fix it? My sat count will vary anywhere from 3 to 13. Some of it may be because I’m a noob and I had a tendency, I think to take off to fast before it had a good lock.

Your sat count should not vary between 3 and 13 it should get above 5 and stay there. Something is not right in your setup. Can you post a picture? I can’t believe the mini is GLONASS only, what is the name of the GPS?? You only need to flip to stabilize and land if you suspect the machine is off. How are your vibration levels?

To me if a flight controller is going to try to do something it knows it can’t it is a coding issue, perhaps I’m confused, so straighten me out! Ive seen other people having the same problems. For now I won’t fly with RTL failsafes, only land. But its a shame this doesn’t work, Ive watched videos on you tube of RTL working but the last one I watched was of a guy in Russia, which is lucky enough to have plenty of satellites. The U-Blox site has a map of coverage and for me in Florida its not good, in the center of the US its good, in the north west part of the country it doesn’t work at all.

What is the name of the GPS module?

This forum wont let me attach files. I have a White Sheep frame and the GPS is a U-blox 6M, which is Russian sats only like the rest of the GPS boards people seam to use on the APM mini. Its mounted on top of my APM mini with nylon spacers on the top deck, directly under it on the bottom deck is my receiver, I do use carbon nylon props that are on the same plane as the GPS. Thanks for your feedback, I really appreciate any help I can get!

People claim on the net that it needs to be 8 or more for reliable positioning.

Gary you said you couldn’t believe the GPS was GLONASS only, thats a good point I can’t either, why can’t it work with both that way you would have like 50 sats instead of 20. This GPS crap is pissing me off, what about the driver less cars, I would think they would need the sats too. How does that work are they apart of a government program we don’t have access to?

I thought the 6M was standard US GPS… Driverless cars use LiDAR to miss stuff and GPS to tell them roughly where they are. Oh and lots of other things.

Sat here thinking 6M, 6M why do I know that number so well. Oh yes the two I am looking at and the 5 I have in a draw

Bit of GPS collector just the best bit of kit. 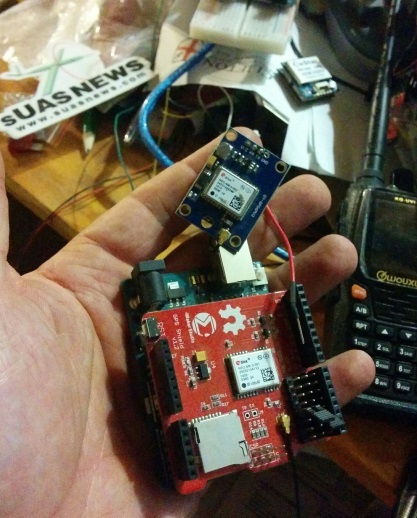 Do you have any usefull info for me? I would appreciate it.

Not sure why my Iris+ dropped from 8 sats to 6 sats in a matter of seconds while fly at pretty much the same altitude. It on;y lasted several moments the bounced back up to 8 sats. The onlt reason I knew right away is because my GCS alerted me.

What is this about MBeaubien?

Just wondering why I would lose at least 2 sats all of a sudden.

You find out let me know, maybe it would explain me having 8 and dropping to 4

It was my 3rd flight with 3.3.3 firmware, not sure if that had anything to do with it, normally once I get my Iris+ in the air I gain sats not lose them.

(The link to non EKF Failsafe is also on the above page ie AC3.2)

Normal behaviour is that sometimes signals to sats are lossed and regained.

My flyaways were just that, I had RTL set to fly at the current altitude.