Tri Tilt VTOL, Elevons works crazy in QHOVER and oposite to the mots

In the next video I show the Elevon issue in QHover forward flight.
I know, its not the target of a VTOL, but the same situation happend while landing with the same windspeed. And during hovering on spot without wind, the Elevons work crazy. Good to stabilize a Tailsitter.
This is the situation in Test 48, line line 270 of the log. 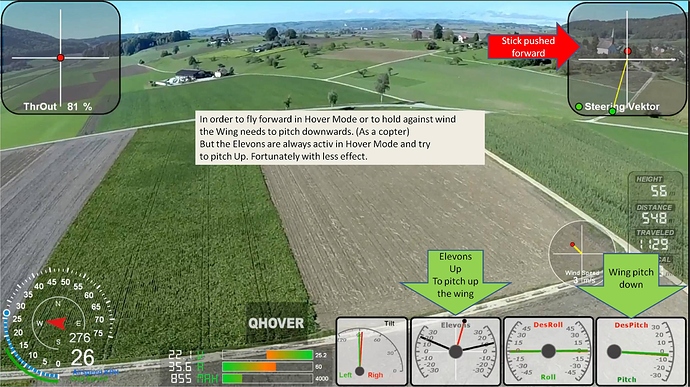 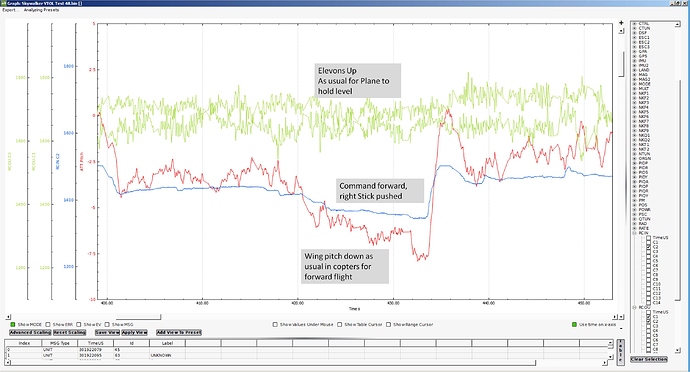 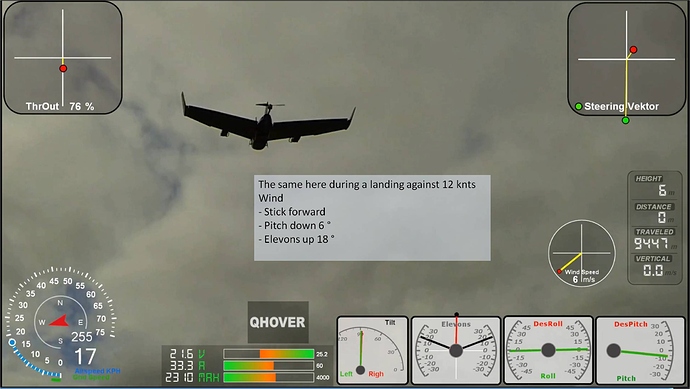 Elevons in Landing.jpg2518×1420 162 KB
The video Test 48: https://youtu.be/HINcB43YoW8
The log of Test 48: https://drive.google.com/open?id=1_lP6Es_Aduwnq3ZNmLuoLL4VKYz4shfQ
And the parameters: https://drive.google.com/open?id=1gerz73q3rHmzz0K-y4V9ZGnW0j0jRGZh
For me, the Elevons should be deactivated during Q Modes. The crazy actions disturb also the the first part of the transition. (Up to Q_TILT_MAX)
I don’t know how they work in other VTOL applications.
iampete (Peter Hall) October 23, 2019, 7:25pm 2

Have you seen this in Q_stab? (not yet had a look at the log)

Yes, the same Elevon activities in QStabilize.
To see also in the Video e.g. at 0’20" after Takeoff
(not on the wing, but in the Gauge Elevon)

It looks fine to me. The steering vector plot is the equivalent of stick position? To me it looks like you pull back the stick and the elevators go up as we would expect. There is no way the elevators can be reversed in Q modes and not forward flight. What you could be seeing is the vehicle exceeding its desired angle and having to fight to get it down.

Hello Peter,
I seems to be a misunderstanding.

And beside this, the elevons works crasy without effect, except wear out the servos.
(The airflow of the props is vertically in hovering.)

I think, the elevons should be disabled in Q_HOVER or Q_Stabilize.

In this situation (nose down) the elevons go up to push the wing backwards down.
as it is nescessary in Plane mode to hold the altitude. Just the opposite of the intention of the mots.

I don’t see this happening opposite. As I say there is no way it can be correct for forward flight but wrong in Q modes

And beside this, the elevons works crasy without effect, except wear out the servos.
(The airflow of the props is vertically in hovering.)

I think, the elevons should be disabled in Q_HOVER or Q_Stabilize.

fair, we could add a bit mask parameter for turning off control surfaces in all Q modes.

Yes, pitch nose down to hold against the wind.

I don’t see this happening opposite

I show it in my first pic with large green text-fleshes. Elevons up 10°/15°, nose pitch down 5°
Elevons push back down, Mots pitch the nose down.
Or even more in the last pic while landing
Not opposite ?

fair, we could add a bit mask parameter for turning off control surfaces in all Q modes

For me I can live with this for a flying wing, but may be it has more bad influence with standard
airplane with long fuselage.
The design of the steering vector (yellow/green) in the right stick oder elevon gauge (red/black) shows not the correct direction.

I show it in my first pic with large green text-fleshes.

The idea of steering or elevon vectors was to see quickly the result of the stick or elevon direction.
But confusing if the direction or the effect is ment. e.g. elevon vector up means both elevons shows up (direction, symmetrical ?) or if the wing pitch up.(effect). Elevons or their vector up means backward up or pitch nose down. The steering vector green dot is wrong in this video. Sorry.
What do you mean with time stamp? The second pic shows the log of pic one. (430 sec)
When the elevons are flat with the wing (underneath) the value is 1500 pps.

Looking at your log I think this looks worse because your elevons are out of trim for forward flight, In forward flight it needs about half up elevator. I would recommend running servo auto trim for a bit while flying in forward flight. 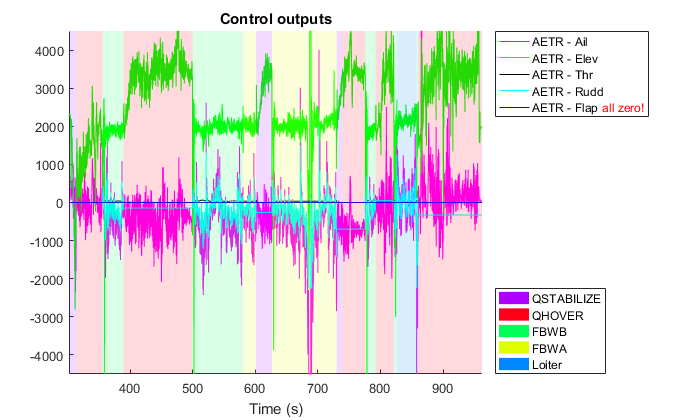 Thanks for analizing my issue.
When I understand right, the elevons should mechanically trimmed to show about 10° up
(like level flight) while RCOut has 1500?
Or with servo auto trim only?

Mechanical trim is the nicer way to do it I guess, auto trim would probably be OK too, its not like your maxing out the outputs as it is.