Hey all. Hope this finds you well and warm. Today was a good day of flying and working the Position Hold (PH) prepping to move to Auto mode. Position hold was amazing on the Trex800. Coming out of PH into Stabilized mode there were no issues. Head setup as dialed into mid stick for frame, all was awesome. Coming out of PH bird was stable. Coming back to landing pad right as I was getting over pad at about 20ish feet Heli reversed cyclic and smashed into the ground.

After looking over the logs there is nothing to indicate to my much untrained eye what may have been the cause. If any out there can have a gander and give some insight I would be truly grateful. All is not lost, swash was all the way down on impact. A few rivets on the frame and redial the head and she should be back up. Would really like to repeat last performance.

LInk to logs and params:

Have a look at the ATT params:
DesRoll to Roll
DesPitch to Pitch
DesYaw to Yaw

Those values have to follow each other very closely before proceeding.

Please try to let the post moved to “Traditional Helicopter” instead of Copter 3.5.

After looking over the logs there is nothing to indicate to my much untrained eye what may have been the cause.

There is no definitive data in the log that indicates why it crashed. Power is not being logged. But my guess would be that since the log just suddenly ends that power was lost to the controller, or the operating system in the controller crashed, and it shut down in flight.

I don’t trust much Ardupilot running on Linux.

I don’t trust much Ardupilot running on Linux.

Linux is not a RTOS, but maybe they are running a special build in these Raspberry Pi units, I’m not sure. At any rate, what I see in the log is that it just quit in flight - logging stopped. Which would indicate to me that either power was lost to the controller, or the OS crashed or faulted.

Thank you all. Hopefully I will be able to give something back when I find out what happened.

FLATS SN Thank you for posting that link. That is easy enough for even me to understand and I will certainly have that open as I rebuild the stack over this weekend.

Currado_Steri I hear what you are saying. I was in a jam and needed to validate a build. I have used the Navio2 on plenty of UGVs and haven’t had any issues.

Chris & ALL
Could totally see a power brownout potentially, especially as I didn’t have the PWM leads hot glued to the board as I was still making adjustments to the ESC and moving things around. (Wont do that again). However, when I look at the logs (pic attached) and replay the telem even after it hits the ground it is still on and telling me what an idiot I am.

RCIN/RCOUT shows full negative collective. If power was lost wouldn’t the servos free float?? I was adding collective to soften a decent when it went into full negative. It was abrupt and you could hear the chop…all the way to terra firma.

Apologies for adding this in the wrong post. Will attempt to move it. If I fail it will not hurt my feelings is someone moves it over to the correct topic. 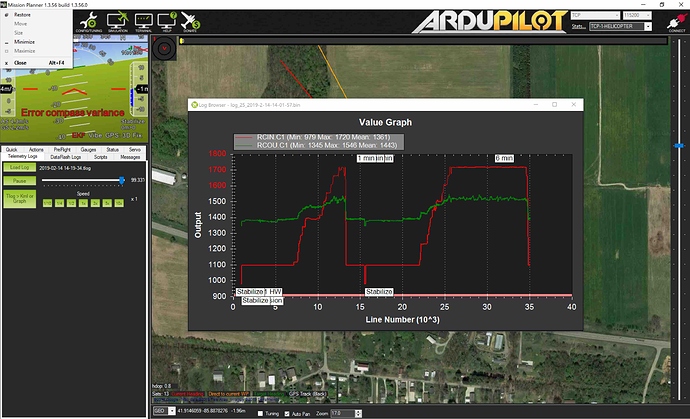 Could totally see a power brownout potentially, especially as I didn’t have the PWM leads hot glued to the board as I was still making adjustments to the ESC and moving things around. (Wont do that again). However, when I look at the logs (pic attached) and replay the telem even after it hits the ground it is still on and telling me what an idiot I am.

Do you have the telem log? That might tell me more than than the dataflash log in this case. The dataflash log just ends and doesn’t tell what happened. If it was still sending telemetry, the raw servo outputs, any errors, and related data should be in it.

@ChrisOlson
Have a Navio2 for quite some time, and has been as solid and reliable as the best of the STM32 based controllers. The default Debian distro on the RPI for the Navio2 has Preempt, so it is “almost” a RTOS…
Only “gotcha” is to not “overload” the RPI with other apps while running Ardupilot, but on a RPI3 is very common to have some vision processing without any issues.
On the hardware side, one has to be careful with powering the Navio2/RPI and having a Power Module is a must, but I’ve seen people powering the RPI via that “stupid” USB cable, that likes to jump off at the worst times

I am not familiar with them. But Frank had indicated he may have a tlog that continued logging data after the controller quit. Hopefully that will be useful.

I do see where the servos dropped collective. But the yaw servo also went to min at the same time. Throttle signal stayed on, but that’s using RC passthru in this case.

So since all the servos that the controller controls went to min simultaneously, it points to a power problem. From what I understand the Navio2 does not support the safety switch nonsense, so that shouldn’t have been an issue.

Ummmm…cough cough… that would have been me there with the 5volt USB adapter to a 10k battery pack… was having issues with the power adapter.

Concur, and I most certainly will not do that again. Maybe just as a backup with some hot glue.

Gents, apologies for the wait. Horses wanted dinner. Here is the tlog. Thanks again so much for the assist!

Yes, the tlog gave me more information than the data flash log. How come your servo rail voltage is running 29.9V and drops to 29.6V under load? Then drops to zero just a few milliseconds before the servos outputs went to max?

Do you not have a BEC on the servo rail? I did not realize that servos can run at 29+ volts. The power to the servo rail quit, and that’s what made it crash.

Thinking this through equates to me “rushing to failure”. Every element of power was standalone with no common ground other than the navio2 and pi itself. Heli was running on 9 cells at 33.3vdc via ESC attached to servo rail for RSC8, Pi was powered independantly via usb battery pack 5vdc, servo rail at 7.4vdc via 2 cell lipo…

I have dealt with this on UGV… I rushed to failure.

If anyone has any other input I’m ears. However when Chris says 29.* vdc on servo rail I cannot think of any other reason.

I cannot thank you all enough for taking the time to help me reason through this. Will do a write up with pics of what not to do concerning power and put it in a thread this weekend. Where should I put it in the forums?

Again, thank you so much!

Is it possible your ESC is supplying power to the servo rail somehow? I really don’t know, but the log shows 29+ volts to the servo rail. If the whole thing is runnable maybe you could hook it all up and measure it with a meter or something. Unless for some odd reason the Navio2 is scaling the voltage wrong. It would seem to me that 29V would smoke the servos and maybe cause damage to the servo battery.

And its difficult to tell from a tlog because there’s latency, but it sure looks to me like the servo rail voltage dropped out. The Vcc stayed at about 4.88V. Besides looking at the graphical data I played the tlog back and the servo rail voltage went to zero just before the GCS started to announce it had lost contact and no data for “x” seconds.

Heli was running on 9 cells at 33.3vdc via ESC attached to servo rail for RSC8,

@frankieb did you check to see if the ESC plug’s power and ground wires are maybe supplying excess voltage to the servo rail that caused it to fault? I’m not saying that’s the case, but it is a possibility. It is strange that the servo rail voltage as logged is close to the operating voltage of the main power battery. Could the ESC have a BEC in it that is malfunctioning?

Chris, in spite of full down collective @ around 2.5/3* negative pitch from 20ish feet the bird actually fared pretty good. All electric components are still functioning. I plan to have her put back together this weekend.
Before all that i will run all electrics and get voltages and post. ESC didn’t supply voltage to servo rail so i had to add another line, the 2 cell battery.

Can’t say this enough, really grateful for all of yours and the other members time. Headed to see my son on the coast today but will do checks and post when I get back tomorrow.

Before all that i will run all electrics and get voltages and post. ESC didn’t supply voltage to servo rail so i had to add another line, the 2 cell battery.

On electrics I have never used a servo rail battery - always use a BEC powered from the main flight batteries so the grounds are always back to the main power battery, and no floating, or semi-floating, grounds.