Hello.
I’m using Pixracer R14, TradHeli 3.5.5 firmware and a T14SG Futaba 14 channel transmitter. My helicopter is Blade-130S with a Direct Drive Fixed Pitch Tailrotor. I map the servo output channel 4 as motor 7, and the servo output channel 5 as HeliRSC,which are expected to connect the tail motor ESC and the main motor ESC, respectively.
I have also uploaded the param list I’m using.

Here is the problem: When I arm the Pixracer (without connecting the ESC), every pwm output channel seems working properly. The servo ch4 outputs zero, and the servo ch5 outputs 1000 (I set the min output of servo ch5 to 1000), which is depicted in Fig. 2. However, when I increase the throttle, the servo ch4 outputs strange values (like more than 7000us [Edit 1, the origin is ms:sweat_smile:], with the yaw stick of the transmitter right in the middle), which is depicted in Fig. 1. When I decrease the throttle to zero, the servo ch4 outputs zero again, just like Fig. 2. I double check the actual pwm output using Digital Oscilloscope and it gives almost the same result.

I also check the transmitter (T14SG) settings, which is shown as follows:
CH1 Aileron
CH2 Elevator
CH3 Throttle (should I set it to PITCH (collective)? I really don’t know how to set the CH3 in transmitter

If the information is insufficient, please let me know and I will reply ASAP.

By the way, I will be very grateful if any advise about setting other parameters are provided.

In addition, I want to say thank you to Chris for his four TradHeli setting videos on youtube

. They are
very instructive.

Thanks in advance,
Richard

Hi Richard, it is probably not very clear in the wiki, but when you are using the DDFP Setup, it will connect to the motor 4 output. You would only use the tail motor RSC output when usingi a DDVP setup. So change servo 4 function to motor 4. Leave servo 5 function as main motor RSC. I’m not familiar with the blade 130, I’m assuming it is a variable pitch (collective/cyclic), constant speed main rotor. Does your main rotor ESC have a governing function?

CH3 Throttle (should I set it to PITCH (collective)? I really don’t know how to set the CH3 in transmitter

What aircraft type do you have set in your transmitter? It should be set to an airplane type. Not a helicopter. So channel 3 would be throttle in the transmitter but the pixracer will use it as collective.

Hi, Bill.
Thanks for your advise! I should have mapped Servo 4 as motor 4. I have done this before but I didn’t let it restart and see the result. This time after I change the mapping configuration, I restart it. It seems good! 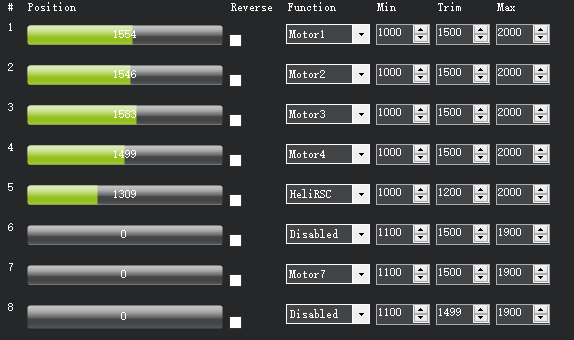 The Blade 130 family includes Blade 130x (DDVP) and Blade 130s (DDFP). The ESC is a 2-in-1 ESC from the
original manufacturer, so I don’t know it very well (Also I need to learn more about what governing function is )

. But I will try to figure out whether it could be used by Pixracer or not.

I set the aircraft type to heli, without using any kind of mixing, so it hasn’t caused problem yet. I will spend some time reconfig the transmitter under airplane mode from the very beginning.

Richard,
I had a quick look at the manual for the Blade 130S. From what I could see, it appears that it is using throttle curves in your transmitter setup. So you would just use mode 3 for the rotor speed control in the arducopter software. That is why you use a standard airplane type in your transmitter.

Bill,
Thanks for you reply!
For now, I’m using some spare components of the Blade 130S (main rotor and tail rotor, servos and the ESC) to make sure that I could make them work properly under the control of the pixracer. I’m controlling the pixracer by Futaba T14SG transmitter.

The controller of the Blade 130S is combined with the receiver of the heli. And its transmitter (a Spektrum transmitter) doesn’t appear to be configurable, so I don’t want to use it, considering that it might cause some problems. After I finish the tests on the components of the heli, I will replace the controller with the pixracer and mount all of them on the heli.
I set the Futaba transmitter to airplane type, and the pixracer works fine.
Thanks for your help!