In the past, I remember I read somewhere that there is a way to simulate a failsafe without turning off the radio. If my memory is correct, you assign a switch to simulate the failsafe but I cannot remember where is it located in the WIKI or Youtube. If somebody knows the URL please share.

This thread is related to me previouse post wherein I lost radio control but I found out that the radio faisafe is not enabled. I think I have made the required parameter settings and I need to test.

If my memory is correct, you assign a switch to simulate the failsafe

I suppose you could mix a switch to lower the throttle chan below the FS value but why bother when you can just turn off the radio?

lower the throttle chan below the FS value

Thanks for that. The reason I want to do this is to also test gaining back control after a throttle failsafe. Turning off the radio means you have to turn it on and wait till you gain connection which usually takes longer time. By the time you gain control, the copter might have already landed. Secondly, if the copter does unnecessary manoeuvres or fly away during testing, then its faster to regain control. I think. I have not tested it yet. Any reaction will help before I get into this test.

I think you can validate this even on ground… with your drone connected to a GCS, simply turn off your RC and turn on again some time later and take a look at MAVLink messages coming, you should see a Radio Failsafe messsage ON and OFF afterwards.

As it is a native and well-established feature from Ardupilot, I don’t think it is that necessary to test it on flight, just make sure you correctly set up your parameters… What’s your opinion about it @dkemxr ?

I always just test it on the ground with a GCS connected. As long as the message “RC Failsafe” comes up you’re good to go. When testing on the ground the quad will just disarm, regardless of your failsafe settings. Then just check your failsafe actions are set as you want. If you are using RTL then test that separately as a flight mode.

Yup I’ve done all those ground testing already. And I find it is easy to run a radio failsafe without turning off the radio if you are running OpenTx or EdgeTx. Just go to the receiver number in Model Setup. In the screen shot below, I am bound to receiver no 13. Arm the quad and when you are ready to simulate a radio failsafe, change the receiver no to anything else. When you want to regain connection, set it back to 13. This is an real failsafe as the radio will stop talking to the receiver. 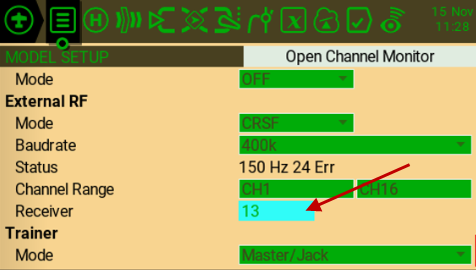 At one stage we had a transmitter that had a built in throttle-cut switch, not a bad idea with planes and things in a world where you’re not using a flight controller to intelligently control arming and everything else.
It seemed like such a good idea at the time we’ve continued using it on newer transmitters too.
We have a switch set to throttle channel -120%, and switch warnings so it’s impossible to power up the transmitter and use it unless the throttle cut is activated - and the bonus is the aircraft starts in a RC Failsafe condition, meaning it cant arm or do anything strange either.

This throttle cut switch is a quick/easy way to bench-test the RC Failsafe too.

The receiver (or transmitter/receiver combo) must be set to NO PULSES for the failsafe condition.