I’m working on a project involving a Tarot T960 frame. First flights have been unsuccessful, while it technically flies it doesn’t fly well. The specs of the build are as follows:

An example of the flight characteristics can be found here: https://streamable.com/8uu7y9
It doesn’t like to gain altitude, feels generally sloppy on the controls but worst of all exhibits a tendency to drop on one side as shown in the video. I initially suspected PIDs but after some tuning work it seems like there’s a larger problem at hand.

My first theory is the aircraft is too light resulting in the motors getting too slow at times resulting in the loss of control. Looking at the logs shows hovering around 50% throttle and comparing to successful flights of very similar builds on YouTube shows that weight probably isn’t the issue. The following image
shows.

Some further analysis of the logs showed what I think might be the culprit. I’m noticing a large variation between the RPM telemetry sent back from the ESCs and the RCOU value sent from the flight controller. I’ve attached a log file showing that fairly well especially in the last flight of the 6 on motors 5 and 6. (Example1.bin)

Testing the motors without load showed a much more reasonably matched response as shown here: https://imgur.com/a/8F2DRZv
I went on and tied the aircraft to a weight and ran up just a single motor with propeller and noticed there seems to be a desync between 25-50% throttle where the RPM drops drastically and makes grinding sounds as shown here: https://streamable.com/udx9zs In this video I’m just increasing the throttle at a constant rate from 0-100%. The second log file shows the drop in RPM pretty clearly. (Example2.bin)

I’m using DSHOT150 with the ESCs plugged into AUX ports 1-6. I noticed if switching to DSHOT300 the desync would occasionally not occur as shown in this image. Firmware is updated on all ESCs, motor timing is set to AUTO (although I don’t notice any difference on 10 or 16deg settings), and Low RPM Power Protection is turned off (was getting a very minimal amount of throttle with it turned on).

I’m stumped on how to move forward. No ESC settings changes seem to help with the desync problem. I’m not even sure if that’s the cause of the instability but it certainly seems like a likely culprit. I’d appreciate any advice or analysis anyone can provide.

this instability is because of some wrong parameters and poor tune of your copter
looking at DesPitch, Pitch and DesRoll, Roll it shows your copter cant hang on a position well 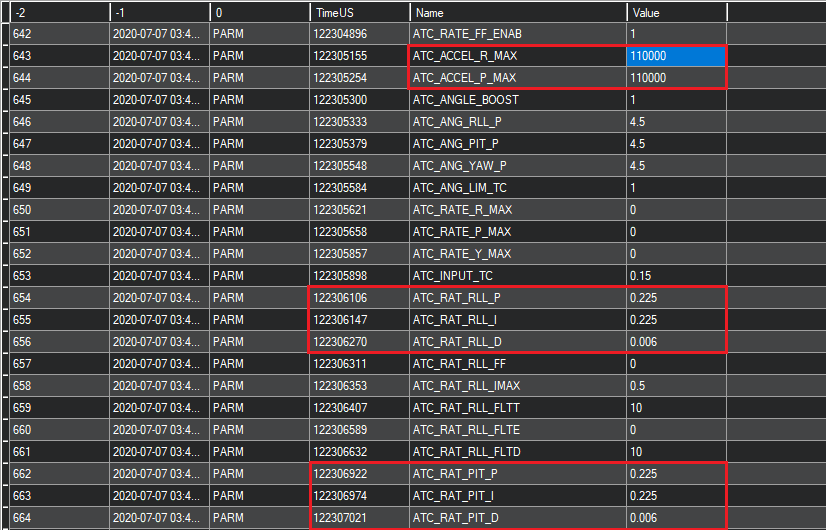 did you competed tuning process instruction ?

Initial parameters.pdf (119.7 KB)
Look to this params… may be help you

I’ve seen this exact behavior with large quad. The real problem is your aircraft is WAY over powered.

I looked at the logs and your average total current draw is around 15 amps. That’s about 2.5 amps per motor.

Looking at the motor data chart, the aircraft is “hovering” some where around 20% throttle. At that “hover throttle” you have very little stick travel between full low and hover, so the stick is going to be REAL touchy. That is why the aircraft is so difficult to control.

At this point I would bring the aircraft up to its intended Take Off Weight (TOW).

PIDs are definitely off but I’ve been having trouble working through the tuning process out due to falling out of the sky so often. I believe most are pretty close to stock with some increases on P that I’ve done manually.

Regarding the large oscillations in the middle of the graph you sent. Do you think those might be caused by something like the motor issue i mentioned. That seems like a different type of instability than the rest of the graph where the pitch isn’t matching the desired very well.

Thank you for that, I’ll see if I can use that as somewhat of a starting point. I noticed the LiPo is entered as 12s on the sheet, I’m not sure how the parameters are calculated in that sheet but would that affect anything outside of the battery section as I’m using 6s on my aircraft.

Very interesting, I thought the same thing initially but watching youtube videos of other similar setups showed no problems. I might try adding another 5lbs to see if I can’t get the hover throttle more around the midpoint.

about motors you should test them separately

Test flights today wouldn’t even lift off the ground. Throttle above idle just yields squealing sounds and a drop off in RPM. Tried normal PWM signal, Oneshot, Dshot150, Dshot300, the only other changes being some PID adjustments on the pitch, roll, and yaw rates as suggested above. Tried adjusting BLHELI settings as well to no avail. I suspect ESC hardware but it doesn’t make sense to me why I can’t even lift off now even on the same configuration. I don’t seem to have any desync issues without the propellers when doing short tests.