I’m building a Tarot 650. (320kv motors, 18" props) This is my first build. It’s suffering random extreme Roll/Pitch oscillation episodes. I had been doing some RTL and failsafe testing and was in Position Hold mode just hovering at 15 ft and it started. It was at around 8 ft when it got itself back under control. I’m concerned trial and error will result in crash. I’ve attached dataflash logs of the event and my parameters. I was hoping someone has some pointers for me. Thanks
aQuadcopter Chibios installed over V3.6.6-rc2 030919.param (14.2 KB) 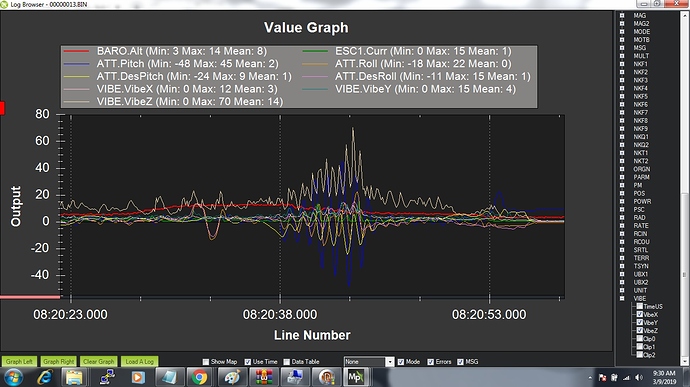 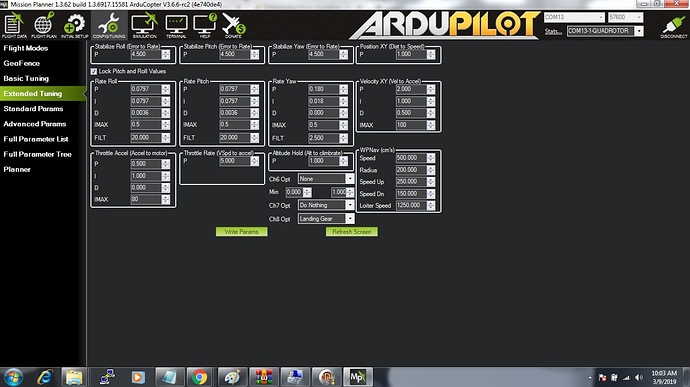 Try lowering the Rate pitch/roll filter from default 20Hz to 10Hz first and if it helps stability do an Auto Tune.

Thanks, I was just reading about the auto tune function. Ill give that a try

You do need to make sure the wobble is gone though because Auto Tune demands very aggressive pitch and roll.

I’ve got the under config/tuning>basic tuning set the Roll/Pitch sensitivity as low as it will go at .05. this sets the P and I for Pitch and roll to .05. Also set the filter fro both to 10 hz. Just went out to try it but the wind is gusting hard decided to postpone it. I’m pretty much terrified its going to eat the dirt at this point.

The wind died down a little for a few. I got chance to get it off the ground briefly. Still seems to randomly twitch for no apparent reason in PosHold. Not sure I should attempt autotune. I read a post about also lowering INS_ACCEL_FILTER from 20hz to 10hz on quads with large props. I have changed this setting but haven’t had a chance to test it yet. Also read some posts on changing MOT_THST_EXPO from its default .65 with the bigger props. One person said that they set it to 0 to disable it another said set it to .75. Attached the the current params.

I took it out this morning it was calm. Appeared to be flying much better. Did an auto tune at AGGR 0.5. It’s flying great. 31 min flight with my 4S 8ah battery and no camera or gimbal. Ready see what kind of times I get with the 6s 14ah battery. Thanks for the pointers Dave.