i managed to get hand launch to work somewhat but the plane crashed into a tree when it deviates from takeoff heading by 30+ degrees to the right. There is some wind component from the left, admittedly, but what worries me is the apparent inability of AUTO mode to put in enough aileron command to observe my default wings level tolerance (5 degrees I recall). Nav Period is 18. I haven’t done much tuning but had a few flights in Autotune. The mission is set up with one takeoff point and one loiter point about 20 degs to the LEFT of my takeoff heading to stay clear of obstacles. I watched in horror as the plane steadily turned RIGHT after takeoff.
See graph below. AccX added to mark hand launch and crash time.

516 RC C1 in out AccX2560×983 203 KB
hand launch occurs at 16:29:47 or whereabouts. the negative peak on the right is the crash. Note that roll remained to the right almost throughout the flight, at times >20degs and caused significant heading deviation to the right. You can also see that I put in hard left moments before the crash. Immediately after takeoff, AUTO mode was able to put in large aileron to correct roll errors, but why then it limited itself to small left aileron and never got the right roll under control?
comparison between Des Roll and Roll also shows a large persistent roll error that the system was unable to zero. If Des.Roll and Roll agreed, then the heading command is wrong, but in this case the system seemed to know where it ought to go but somehow decided to take it very very slow. Also, if the IMU leveling is incorrect, then the roll would oscillate around zero even though the plane deviates to the right. Again in this case, IMU registered significant right roll. I am at end of ropes as to what went wrong. 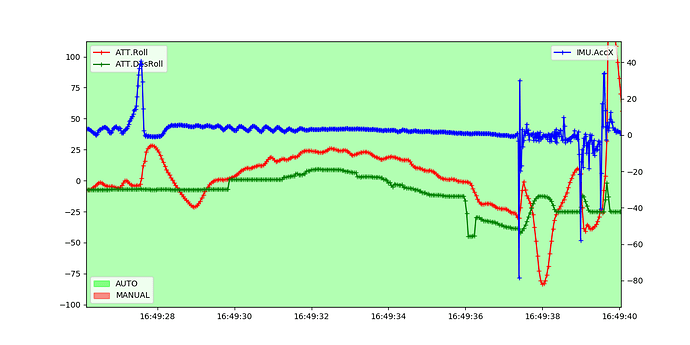 516 roll control1200×600 62.9 KB
Another thing is at the moment of my hard left input, I also switched to Manual, although apparently the plane didn’t respond to that. It might be too late anyway, but this is another unresolved mystery. I have RC lost failsafe set up and it triggered in previous flights correctly. Notice that the plane did not go into RTL. What’s wrong here? Something special about Takeoff or Auto mode?

I had good 20 GPS sat locked and my external compass never gave me any problem. my airspeed sensor has been playing up but it should not affect roll control.

I am not attaching my log here because of location-wise privacy issues, but i’ve been playing around in MavExplorer for hours I can upload any graph as need. Thanks.

You can anonymize the GPS location in the log with Dronee. Mission Planner has this also as a Beta feature but I haven’t tried it there. In any case did it by chance switch to Circle mode after you hand launched it?

You can anonamyze the GPS location in the log with Dronee. Mission Planner has this also as a Beta feature but I haven’t tried it there. In any case did it by chance switch to Circle mode after you hand launched it?

i’ll look into the anonymity function thanks. no, it wasn’t that problem people talked about. Mode was AUTO until it reached takeoff target altitude of 20m shortly before the crash. It has been deviating to the right throughout the takeoff auto mode period. It activated circle unlimited only for a second or two and had no impact on the outcome.

OK. I crashed a Plane irreparably into many pieces from the Circle Mode issue. Wasn’t fast enough on the mode switch and I had trees directly behind me.

sorry to hear that. Hard crash for me as well today, will take a long time to repair. I want to find out why before I try this again.

Do you know how to remove the location data using MP? didn’t see it in the review log interface.

Thanks. i tried this and also https://github.com/gituser1605/Ardupilot_Log_Privacy
MP didn’t work, i could still plot the flight path in google earth. The community code worked to scramble the GPS but the original flight plan is still there

OK, good to know as I haven’t used those. Dronee Plotter seems to work. But anyway, showing the mode in the log graph was what I was after and you settled that question.

By the way, I read those posts before trying out hand launch and was aware that people uploaded a branch that disabled some speed threshold thing that caused your circle mode problem. I forgot all about this today and threw my plane after running a few steps forward. There was no issue. I was flying the official 4.0.5. Probably because the takeoff waypoint in auto mode is indeed different from a takeoff command from the GCS.

Yes. I was using a 2 Waypoint mission for Auto Takeoff and it worked great.I’ll get back to playing around with Takeoff Mode on the next Plane. Only multirotrs flying right now.