Michael Oborne has recently improved the Mission Planner’s Swarming feature so we tested it out at the recent developer “un-conference” in Canberra Australia.

First we tried one drone following another: 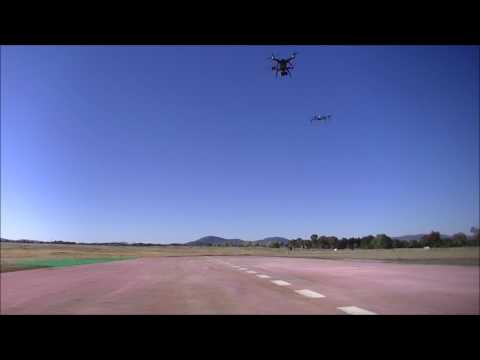 Then a pair of drones following (or sometimes leading) a rover: 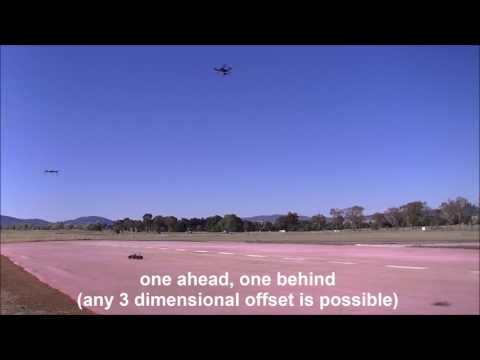 If you want to try it yourself, here’s how: 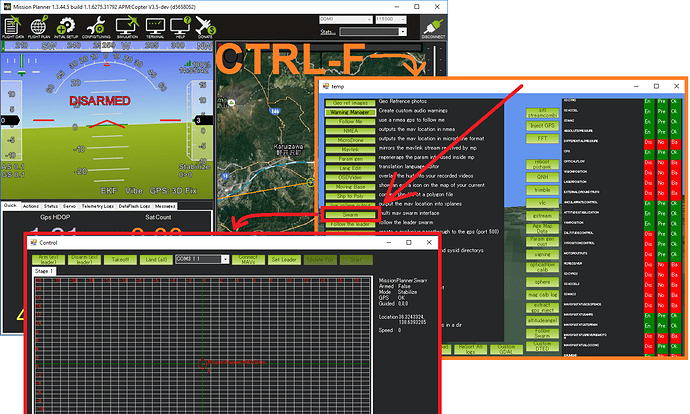 This swarming makes use of ArduPilot’s velocity controller which have been included in Copter since version 3.3 meaning that it works with the Solo.

Warning: this is beta software and although you may not need to use a transmitter to control the followers, it’s best to have a regular transmitter/receiver attached and the flight mode switch setup for use in Loiter and/or AltHold so if anything happens, worst case, the pilot can grab the transmitter and change the flight mode and take control manually.

Michael,
What are the units of the numbers displayed in the swarm screen for x,y and also for vertical? I attmpted a test flight today and had the follower vertical offset set to -10 below the primary and when I started the swarm, the follower shot up to about 1000 feet while the primary was at 400 ft.

Hello ,Mr.rmackay9,I rencently research on mutihelicopter swarming,and my MissionPlanner version is 1.3.59 .I follow you step,and open dialog of swarming ,but I find some trouble .In my dialog ,the Stage1 page is black! I try 1.3.60,but there is no difference.I don’t know how to make it work right. 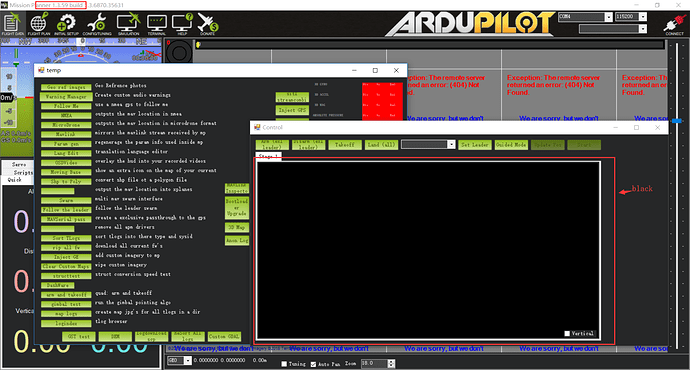 @rmackay9 Waitting for your reply! Thanks!

place the vehicles on the ground in roughly the initial positions you’d like them to be in during flight, press the “Update Pos” button.

If so, from above, it seems that the altitude offset from drone to rover can be set, for example, placing the drone 1m or so above the rover and then press the “Update Pos” button. Will this work?

On MP with Control+F there are two buttons: “Swarm” and “Follow the leader”. With “Swarm” button appears button “Guided Mode”. What is it for?

Hi , can ı use here+ rtk on swarm project ? RTK with one base station and five rover station in same time ?

Thanks for this topic. I have a question from it.
How many telemetry do we need on GCS؟ Is a telemetry enough for all of copters or rovers? or we should use 1 telemetry for each copter on GCS?
Tank you for response me.

Is swarming available for Arduplane for fixed wing?

I am also interested in using this feature on fixed wings, I need 4 fixed wings to follow the main aircraft, of course they have altitude difference when tracking

I’m not the Plane expert but I don’t think that Plane is supported. My understanding is that Boeing implement swarming of jets using AP but I don’t have details. 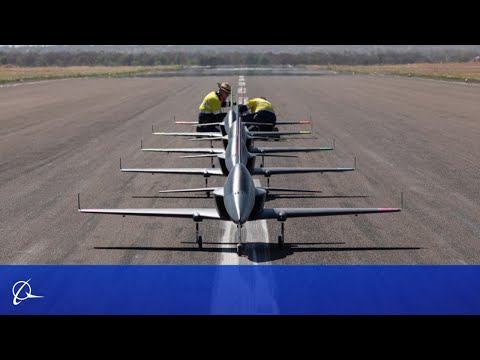 There are some demonstration of Plane swarming on the web, I like this one:
https://cloudskeyes.wixsite.com/home

I wrote a serie of blog on Swarming and made some planes fly on simulator, did not had a chance to make it for real yet:

[image] The Shooting Star is a quadcopter drone designed for light shows by Intel. There have been numerous spectacular demonstrations for swarming models and configurations in the recent years that made the field of experiment out of reach for most of us. Just think of intel record breaking drone shows https://www.intel.com/content/www/us/en/technology-innovation/aerial-technology-light-show.html using hundreds of custom built Shooting Star vehicles and an army of highly specialized operator…

Hello sir,
I am happy that you have done the swarming. I have also been trying to do the using 2 drones and I also followed the same steps which you have mentioned. But the thing is I am facing some issues which are 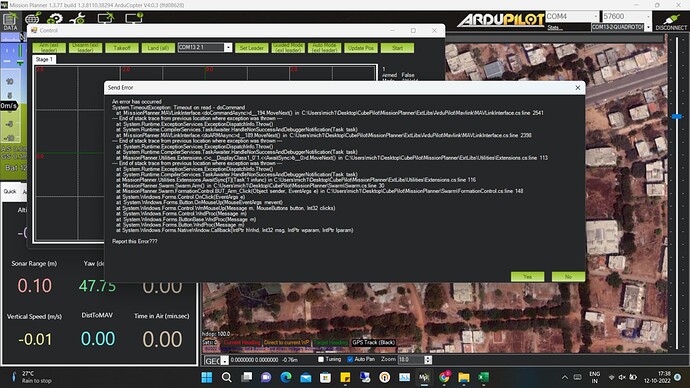 Screenshot (83)1920×1080 229 KB
shown in the below-attached image. And also sometimes the system gets stuck when I gave the command to Arm (exl Leader) or sometimes the Takeoff command is given to the drone.
I even tried to upgrade the firmware and also tries multiple versions of the mission planner but the same error is showing.
I am requesting your help to resolve this issue, or if possible then can you provide me with some references or any kind of possible help?
You can drop me a mail at kdevanand517@gamil.com or if you are free and whenever possible then we can connect and try to resolve this issue. Or I can request you to drop your mail id so that I can connect and discuss this further.
Your help and response are valuable to me.